Ek Jhooti Love Story: what works and what doesn’t 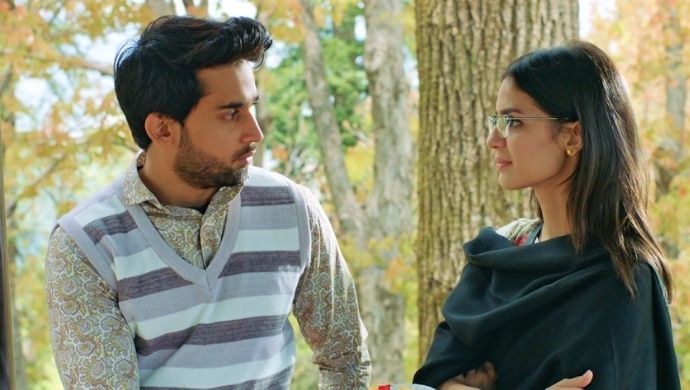 KARACHI: As we review Ek Jhooti Love Story, we cannot deny that the series is a thorough mix of social commentary and desi ritualistic patterns that no one really notices in their daily lives, yet are hilarious if looked at from a distance.

In a rather casual, throwaway line, Salma (Madiha Imam) encapsulates the entire idea behind the creation of Ek Jhooti Love Story (EJLS). In the constant jostling of misplaced idealism and enforced realism exists this rather fun and charming love story.

EJLS is a story of two middle-class households located in a typical bridge k is par area of Karachi. Salma is the bespectacled choti of the Nusrat Jahan household (an excellent Beo Rana Zafar). Tired of being ordered around, of things being passed down to her by elder siblings, and just not being given her due, she dreams of an escape. A romantic escape with the man of her dreams. But with two “aging” unmarried sisters, a subdued brother, a retiring father and an increasingly traumatized mother, Salma’s dreams of getting hitched to a man of her dreams seem far-fetched.

In stark contrast is Sohail (Bilal Abbas Khan). The ankhon ka tara of his mother (a delightful Hina Bayaat) and younger sister (adequately cheery Srha Asghar). He had dreamt of becoming a computer engineer and working in Silicon Valley (well this was before Trump, I suppose). But the untimely death of his father, young Sohail is burdened with taking over his father’s computer shop, running the household, saving up for the marriage of his two sisters; all of which he manages admirably. But in doing so, he becomes disillusioned with his world.

So, when being “ghar ke choti” and “ghar ka bara” becomes too cumbersome and suffocating, they use their fake Facebook profiles to stalk their out-of-reach-in-real-life crushes. No prizes for guessing that they end up befriending and falling deeply in love without knowing the truth. Predictably disaster ensues and their hearts are broken, but not in the way you would expect. Disheartened and dejected, on their parent’s recommendation, they get married. Then their “love story” begins.

Why it stands out

The appeal of EJLS isn’t driven by its story. Social media romance with texts appearing on screen in funky ways isn’t a novel idea. Director Mehreen Jabbar and writer Umera Ahmed are fully aware of this pitfall. So, they work around this basic premise adroitly by adding multiple subplots, each focusing on some kind of social ill.

The regimented class divide of Karachi is in their sights. From fancy desserts to destination weddings, these differences are subtly explored. It’s an entirely different aspirational world. A world both Sohail and Salma want to be part of, without actually knowing what it entails.

Next on their list is burhe betiyon ke shadi. The ignominious questions of society as well as potential rishta walas are a recurring theme during the 18 episodes. Elder sisters, Shabana (Kiran Haq) and Shazia (Mariam Saleem) have done the dreaded tea parade dozens of times, without landing a suitable husband. Some reject them, they reject others and the cycle continues. With each passing day, Nusrat Begum’s trepidations grow. So, anyone who she comes into contact with is a potential rishtay wala.

But when the shoe is on the other foot, Nusrat begum, Shabana and Shazia are guilty of using the same standards to evaluate marriage proposals for their brother Salu Bhai (Furqan Haq). This hypocrisy would have been jarring had it not been so normalized by our society.

Another recurring theme was the girl’s search for an ideal. The idea of romance propagated by Shah Rukh Khan’s flailing arms is entrenched in the minds of the family. So they often end up rejecting what seem like reasonable proposals for fairly superfluous reasons. And before the not-all-men groups start rolling their eyes, the series does a decent job of highlighting the pressures faced by fathers and brothers, in such situations.

Yet, for the most part, EJLS, remaining highly entertaining. The Cake duo of Mohammed Ahmed and Beo Rana Zafar once again excel, constantly pulling each other’s leg. There are some memorable one-liners and curses from Nusrat Begum; my favourite being ‘Sust ul Wajood (inherently lazy as per my understanding). The relationship between Shazia and Tanzil ur Rehman (the other Fawad Khan), is endearing. Shazia has the gift of gab, Tanzeel has endless love for her, perfect equilibrium is found. In some ways, it reminded me of the relationship between Monica and Chandler. However, unlike the Bings, here it’s the female character that needs to wise up.

Shazia’s character does get some rather preachy sermons. In switching modes from traditional TV dramas ideals, Umera Ahmed chooses to loudly announce her drive towards a more progressive outlook. She isn’t aiming for nuance.

The odd character was Shabana. For someone who seems so phlegmatic, the obsession for an ideal seems unfounded. It’s unclear if she really wants to get married or is just playing along because her mother wants her to. Another foible in terms of characterization were the roles performed by Salma and Sohail’s best friends. They seem entirely dispensable. Especially Nofil seems to spend more time discussing his problem with Sohail’s mother than with his supposed childhood friend. It makes Sohail and Salma look solipsistic, which they are not given how they treat everyone else.

There is perhaps also merit in the argument that 18-episodes stretched the story thin. Just the number of times Sohail rides his bike despondently near the corner of the road or Salma sulks in her room longingly, with the song Meherma running in the background becomes annoying. Despite that, the climax does seem a bit rushed. The big reveal goes passingly. It could, however, be argued that it shows that both our hero and heroine are at a more mature place mentally.

Nonetheless, despite some flaws, Ek Jhooti Love Story is entertaining, and we hope our review has done a good job pointing that out. One of the best phases of the series is the initial post-marriage period of Sohail and Salma. It’s done tactually, with the writer-director duo walking the tight rope of allowing the characters to inch closer to each other despite their apprehensions. The battles Sohail and Salma go through to forget their romantic fantasies and accept the truth can be felt. There are comical moments, there is lots of awkwardness and eventually, there is some affection.

EJLS also benefits tremendously from its casting. Everyone fits in their role perfectly. Like the Pep Guardiola famed triangles, Mehreen Jabbar and Umera Ahmed create circles beside the lead pair. Tanzeel ur Rehman and Shazia bring a certain level of quirkiness to the table. Mothers of Sohail and Salma have their own ongoing equation based on mutual needs. Nusrat Begum and her husband can’t live with or without each other. It makes for engaging viewing.

Watch: In conversation with Bilal Abbas and Madiha Imam

Both Sohail and Salma want to ignore their realities and be someone else. A world of illusion, seemingly close but always beyond them in truth. So eventually, they learn to create and live in their own cocoons. It might not be as glamorous or fanciful like how they dreamt, but it is an escape from being the choti and bara of the house. They decide to be honest with each other and live together…kyun k waisey marta to koi nahe hai.