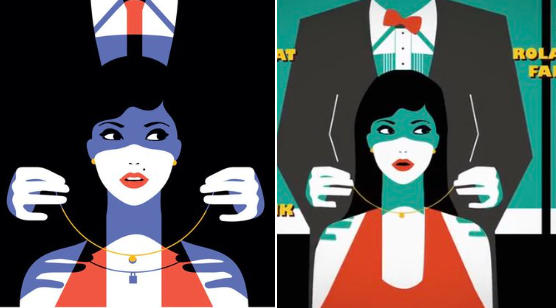 KARACHI: Asim Abbasi recently released his first web series, Churails. Soon after the 10-episode long series was launched, it picked up critical acclaim and praises. YouTube videos delved into the subject of how the series is leading people astray, mostly by people who had watched nothing beyond the opening sequence.

However, a Twitter user noted striking similarities between an illustration from the opening sequence and French Illustrator Malika Favre’s illustration. He blamed Churails to have ripped off the French artist’s work.

Half a minute into the web series #churails and I spot some blatant plagiarism in the opening credits. @malikafavre’s powerful illustration has been quite conveniently ripped off. @nytopinion @nytimes @NewYorker pic.twitter.com/SNtF22eCGd

Asim Abbasi chose to remain silent on the issue for the first month of the tweet coming out. However, recently, on September 18, he tweeted recognizing the issue. He informed his fans about the corrective process he quickly put in place following the tweet that identified plagiarism in the opening sequence of Churails.

2. I would also at this point like to clear the name of our animation creator, Studio Rokhan @rokhan_official of any wrongdoing. Due to an oversight by the production house, the animation studio was provided the said artwork and given the authorization to use it. (Cont’d)

Not only did Asim Abbasi reveal that the team approached  Malika Favre to rectify their mistake with reference to Churails, but he also took the opportunity to clear the name of the animation studio in question, Studio Rokhan. “Due to an oversight, the animation studio was provided the said artwork and given authorization to use it.” he highlighted.

The Cake director also expressed the reason he chose to remain silent until the correction was completed. The issue now stands resolved, hence his recent statement.

3. My silence on this matter was due to the production house needing time to complete the corrective process, which it now has. I strongly believe that the rights of all artists must be protected and upheld at all times and would like to personally apologise for this oversight.

“I strongly believe that the rights of all artists must be protected and upheld at all times and would like to personally apologize for this oversight.” he wrote.

Asim Abbasi has been open to all kinds of constructive criticism surrounding Churails. With his series firmly standing against misogyny, and setting examples of healthy non-toxic masculinity, Asim Abbasi is not far behind with his healthy approach towards accepting his mistakes and prioritizing respecting artists.

He maintains what he said in an earlier tweet following Churails‘ release i.e., his work is no longer his and belongs to the people who consumed it – the awaam and the critics.

“It took a lot to get this out to everyone, and now if it doesn’t spark constructive talk, it failed in its purpose.” He penned down on August 18th.

#Churails no longer belongs to me. It now belongs to everyone who is consuming it – the awaam and the critics. And they are all entitled to an opinion. It took a lot to get this out to everyone, and now if it doesn’t spark constructive talk, it fails in its purpose.