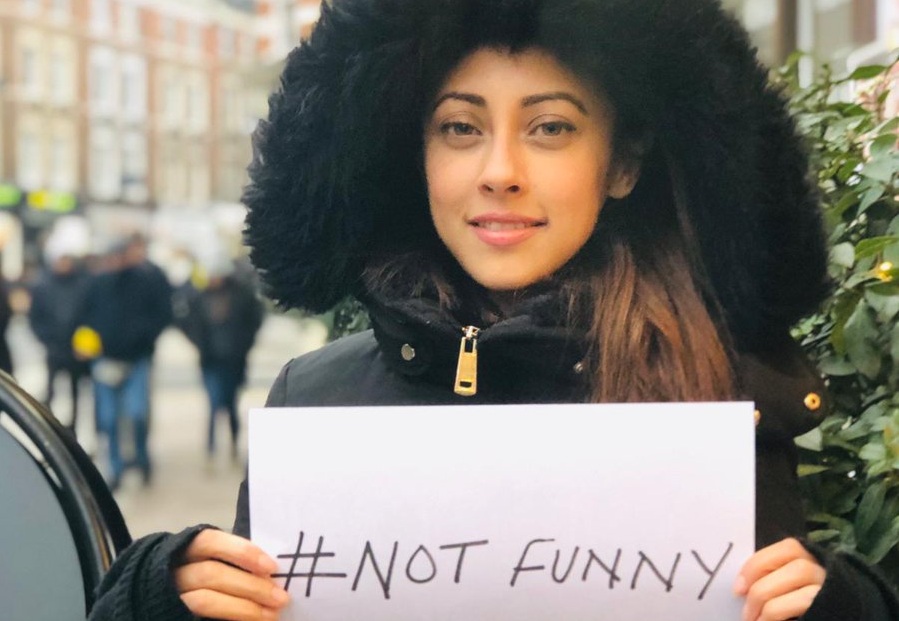 KARACHI: We all have known a man who loves to make jokes that belittles his wife or other women in his family; sometimes that man is our father. Other times, we see “casual” sexism at work when there’s a cake in the office and everybody eyes the room to find a woman and have her serve it. We hear jokes when a woman is unwell and her boyfriend goes: yaar larkiyan kitni sensitive hoti hain na? (Why are women so sensitive?)

The worst one yet, of this era at least, is probably when a man confuses flirting with sexual harassment, and finds it funny to say that he’d love to ask that “hot chick” out in the office but he wouldn’t because “kaheen MeToo na hojaye…”

Read: Haroon Shahid’s problematic tweet and why #MeToo should never be used as a punchline

Just ahead of International Women’s Day on March 8, Uks Research Centre, a rights-based group that focuses on the women-media relationship, has launched the campaign with the hashtag #NotFunny on Twitter. The campaign is aimed at raising awareness about how sexism hurts women and men, highlighting advertising with sexist punch lines and toxic internet culture where sexist jokes are regularly shared in the form of memes.

Raising awareness that sexist and misogynistic jokes and humour belittle women in general, and a ‘wife’ in particular and why these jokes must not be taken as a source of laughter and entertainment. #NOTFUNNY pic.twitter.com/H23ADdKNFX

Read: Twitter wants Karan Johar to speak up on the Hardik Pandya controversy

Though he was called out on it, it goes to show how sexist jokes have become part of the desi culture.

Notable journalist and feminist Afia Salam explained it best: Everybody likes a good joke but how about people start laughing at jokes with women instead of laughing at them?

Everyone likes a good joke… How about laughing at some jokes WITH #Women.. not laughing AT them… Because sexist jokes are #NotFunny! pic.twitter.com/031IPCrCL0

Other celebrities such as singer and philanthropist Shehzad Roy have also come out in support of the campaign.

Singer, philanthropist and Founder/President of Zindagi Trust Shehzad Roy @ShehzadRoy says NO to sexist jokes too! Do you? #NOTFUNNY pic.twitter.com/B0GyWUEpzF

#NOTFUNNY @CenterUks
"One day, comments which women constantly hear thruout their lives, will b collected in a big-ass book of sexist remarks. An we’ll gladly beat up all th ignorant, closed-minded individuals that use these examples of sexism with this heavy book." Marina K pic.twitter.com/yXxBBYsJnr

Read:#InternationalMensDay: A meninist speaks up about the importance of having an entire day dedicated to men

When it comes to sexist humour, Pakistani politicians are all guilty of it. Remember Khawaja Asif calling PTI’s Shireen Mazari “tractor trolley”? People enjoyed a laugh but the fact of the matter is, these kind of sexist jokes prevent women from developing any kind of confidence. Worse, it perpetuates an environment where women feel discouraged to join the work force.

In essence, sexist jokes hurt the economy and the country from progressing.

Senior journalist and anchorperson, Asma Shirazi @asmashirazi, says NO to sexist jokes too. Do you? #NOTFUNNY pic.twitter.com/uttvaSeWYd

Surely, comedy can be intelligent. Punch lines can be more conscientious, thereby more powerful. At the heart of it all, sexist humour is lazy. And the person cracking a sexist joke is at best blinded by privilege and #notfunny at all.