How important is it to have Bilawal Bhutto, a millennial, in Parliament?

Following his recently-concluded election campaign, the PPP chairman managed to stand out among candidates whose political experiences exceed even his age 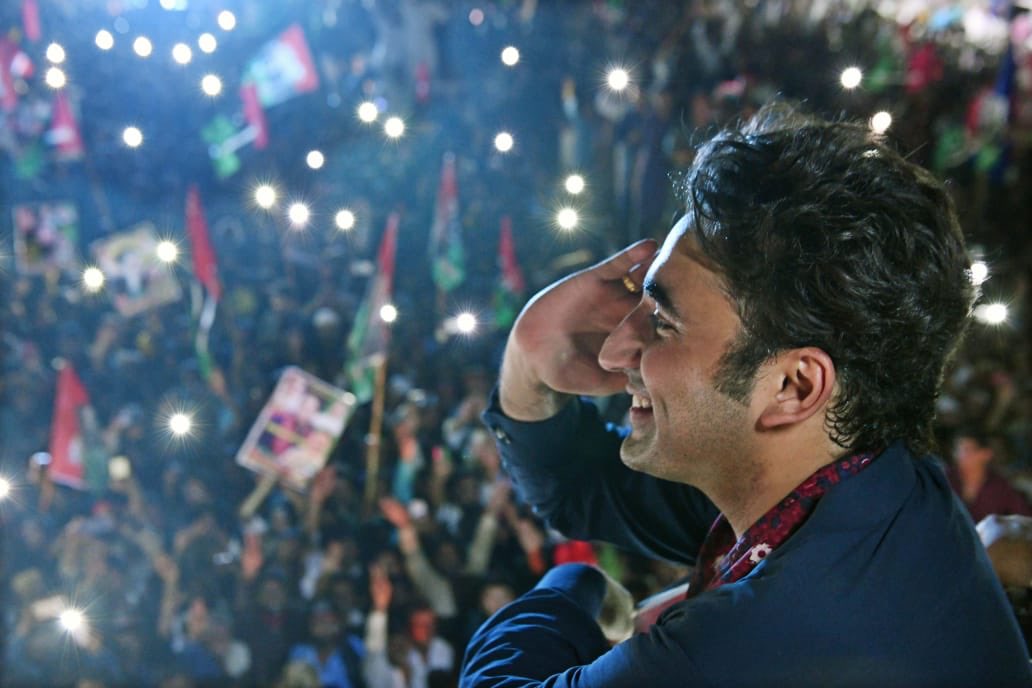 KARACHI: It was almost a decade ago when a seemingly reluctant 19-year old Bilawal Bhutto Zardari took oath as co-chairman of the Pakistan Peoples Party (PPP) – three days after his mother Benazir Bhutto, twice prime minister of Pakistan, was assassinated in Rawalpindi.

Positioned in the middle of a sea of microphones, with his head down, he pledged his commitment to the “stability of the federation” with a some-what lack of sincerity. But then something changed; as though his words had suddenly reached his own ears. He looked up, staring attendees directly in the eye, and exclaimed: “My mother always said democracy is the best revenge”, practically screaming out the last two words.

Fast forward to April 2018, Bilawal recalled his mother’s words during an interview on BBC HardTalk. This time around, the 29-year-old came across as genuine and resilient. In that moment, he wasn’t an inexperienced politician or the representative of a tainted political party thriving on immortal figures. He was calm, mature and articulate. In that moment, Bilawal was a Bhutto.

Following his recently-concluded election campaign, he has managed to stand out among candidates whose political experiences exceed even his age.

Bilawal won the NA-200 seat from Larkana, and will be sitting in the lower house for the first time. This begs the question, how important is it to have a millennial in Parliament?

“Bilawal has the trademark Bhutto charisma with the intellectual stamina and vision for ideological, issue-based leadership,” maintains PPP Senator Sherry Rehman. According to her, Bilawal has an edge over other politicians. “As a millennial, he is in touch with challenges that shape the young Pakistanis experience in ways no other party leader is.”

But more importantly, the question of the hour is whether Bilawal is able to establish himself as a potential leader of the country’s youth as opposed to someone who is merely a product of nepotism relying more or less on political patronage?

“The reason that these questions are even coming up are because of how Bilawal ran his election campaign,” says Institute of Business Administration (IBA) Associate Dean and Political Analyst Dr Huma Baqai. “The maturity and poise with which he conducted himself goes on to show just how badly Pakistan needs not one but several Bilawals in parliament,” she adds.

In a political climate where election campaigns were centered on blame games instead of plans for the way-forward, Dr Baqai found Bilawal’s to be a “breath of fresh air”. His campaign focused on the party’s manifesto and past achievements and remained largely positive, she maintained.

What is Bilawal Bhutto’s voice?

This point of view is also mirrored by Dawn columnist Umair Javed who believes Bilawal’s voice to be progressive, positive and non-confrontational. When asked if his voice is worthy enough to echo through parliament, Javed said, “Keeping in mind the way he ran his election campaign, I think it would be ideal to have a young voice like his in parliament, yes”.

But venturing into the main critique directed at PPP’s chairperson, he also pointed out that Bilawal is still seen by many as the son of “corrupt Zardari” and that electing him would mean furthering “dynastic politics”.

Meanwhile, Haider Naqvi, who works as a teacher, tells Cutacut about how he would’ve definitely voted for Bilawal if he were contesting from his constituency. But not for the reason you may think. “Yes, Bilawal is young and everything but my vote for PPP is mainly because of the party’s ideology and its left-leaning rhetoric,” maintains Naqvi. However, he adds, “But it’s true that I find his presence on social media far more relatable than any other politicians.”

Senator Rehman also vouches for Bilawal’s progressive voice. “Bilawal is defined most by a strong sense of clarity on progressive values; he mainstreams tolerance and inclusion instead of hate and violence and won’t compromise on policies that empower women or non-Muslims or any vulnerable cohort of the Pakistani social pyramid,” she says. “This is a red line no other party’s leadership is willing or able to draw.”

However, the PPP has often been criticised for ‘pretending’ to be a left-leaning party but bowing to the right whenever their power is threatened. The 1973 Constitution of Pakistan serves as an example.

Javed doesn’t see Bilawal’s secular stance and progressive statements as a vote-winning tactic. “In fact, in our country a secular stance works the other way around, it makes you lose votes,” he says. In Pakistan, where the rhetoric of religion is used to win votes, Bilawal has time and again spoken of an inclusive Pakistan. “Even though the original sin lies with the PPP in legalising discrimination, it is a party that is still a preferred choice for minorities – be it in electing them or joining them.” And perhaps Bilawal is in a place to further cement this sentiment. “But his real test lies in reflective politics,” says Javed. “He needs to address the past mistakes of the party publicly and analyse the party internally, only then can he have a clean slate and a long-term political career.”

In spite of running a clean campaign and earning respect, Bilawal lost from Karachi’s Lyari, a constituency long regarded as PPP’s stronghold.

“People of Lyari are angry with the PPP but not with Bilawal,” says Owais Jadoon, a business sales developer and a resident of Lyari. Jadoon says he voted for Bilawal but also for the Pakistan Tehreek-e-Insaaf or, as he puts it, “for change”. “Although I like Bilawal because he is young and relatable, I can’t deny the fact that we feel abandoned by the party,” he explains, adding that he will vote for Bilawal again if he spends more time regaining people’s trust and listening to their grievances. “The sentiment that he is Shaheed Mohatarma’s son and Zulfiqar Ali Bhutto’s grandson is huge here but he needs to work towards winning the people back now, just being that won’t work.”

In the wake of this result, many headlines stating ‘Lyari rejected Bilawal’ have surfaced in mainstream media. Dr Baqai, however, disagrees with this statement.

“Lyari hasn’t rejected Bilawal,” she says, “Lyari has rejected Bilawal’s disconnect,” she points out. “And if Bilawal wants to walk his talk, he needs to prove that he indeed belongs to a family of leaders.” She also predicts that if he manages to do so, he has all the right ingredients to become the new face of Pakistan.