With its eyes on Parliament, ASWJ appears to distance itself from anti-Shia sentiments 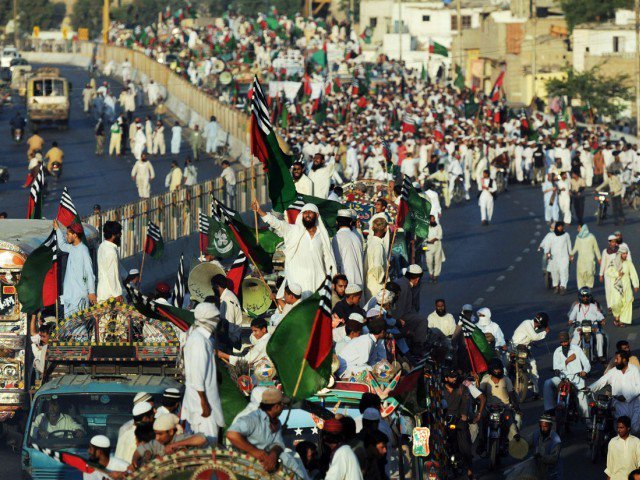 A still from an ASWJ rally in Karachi. PHOTO: AFP

KARACHI: It’s half past 10 on a warm night near Landhi, on the outskirts of Karachi, where the Pakistan Rah-e-Haq Party (PRHP) is organising a corner meeting. Inside Malir’s Muslimabad locality, a crowd, mostly young men carrying party flags of the Ahle Sunnat Wal Jamaat (ASWJ), which was recently taken off a list of banned political parties just in time for the upcoming general elections, gathers in a ground.

Although the meeting for scheduled to start after Asar prayers, the exhausted crowd patiently waits for its leader: Aurangzeb Farooqi, central leader of the ASWJ, who is contesting the elections from the platform of PRHP.

Contrary to what many believe, PRHP is not a new party but it is newly reemerged. The party’s leaders say the organisation was registered in 2002 and had contested elections that year as well. They went on to form an alliance with other organisations under the banner of Muttahida Deeni Mahaz (MDM), which contested the 2013 elections.

“Everyone can join the PRHP. Anyone can contest elections from our platform. It is an open front for every Muslim and we don’t discriminate against any particular sect,” says Umer Muawiya, the spokesperson for ASWJ.

After a long wait, Farooqi finally shows up at the corner meeting site to a cheering crowd.

He is contesting elections from the NA-348 and NA-248 constituencies. Although, he wasn’t victorious in the previous polls, his chances have increased this time round, after the government lifted the ban from his party.

“We were never really banned,” he says defensively while in conversation with Cutacut at the sidelines of the corner meeting. “We were wrongfully banned and there was some confusion that now has been taken care of,” he added. Farooqi went on to criticise the media for “never taking their version” and “doing propaganda” against them.

“The ban against ASWJ was lifted after the state kept an eye on our activities for years and only then decided that we should be unbanned,” spokesperson Muawiya said.

ASWJ was banned in 2012 after its nexus with the defunct group SSP was proved.

Read: Can a Bhai still defeat Imran Khan in Karachi?

The Sipah-e-Sahaba Pakistan (SSP) which was formed in 1985 in Punjab’s Jhang and soon rose as a violent anti-Shia militant group. It was banned and declared a terrorist organisation by former dictator General Pervez Musharraf in 2002. Since then, the organisation and its leaders have used different names for their party, Millat-e-Islamia Pakistan and ASWJ.

“We have never been involved in terrorism. We don’t believe in sectarianism. We are neither against any particular sect or minorities,” he said in a clear shift from ASWJ’s earlier, very public, anti-Shia rhetoric.

Despite this, some of the their still chant anti-Shia slogans.

On 17 July, a press conference was held at Chach marriage hall, Hazro from 1400 hrs to 1420 hrs in the supervision of Qazi Ahmed Akbar, #PTI candidate PP2, and Masroor Nawaz Jhangvi. pic.twitter.com/0m2iJnTAOx

In past, the head cleric of ASWJ said in a speech that he could wipe the Shia population in just 24 hours.

How far ASWJ and its leaders will go to distance themselves from sectarianism and anti-Shia politics after being mainstreamed will be revealed in days to come and more precisely if Farooqi manages to win an NA seat.