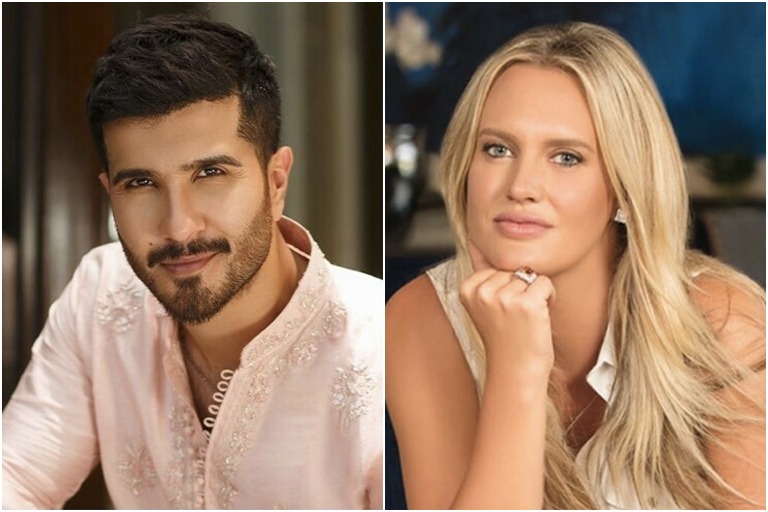 KARACHI: Another day, another celebrity getting schooled on the importance of car safety by Shaniera Akram. Over the course of time, Akram has been very vocal about the concept of car safety and using seatbelts. She has called celebrities out for their carelessness and has engaged in Twitter conversations about the same. This time around, Shaniera Akram expressed her disgust at Feroze Khan for driving with a child in his lap and ignoring road safety rules.

It all started with Humaima Malik posting a video of Feroze Khan driving with one hand and holding a child with the other, oblivious to the uncountable safety concerns associated with the action. The video soon caught Shaniera Akram’s eye and she took to Instagram to talk about how she was, “Sick to my stomach on the stupidity of some people.” She began to wonder, “Why don’t they get it through their thick heads. This is dangerous and putting your own child’s life in jeopardy.”

Thus, began a series of stories by Akram detailing all the reasons why she was so upset. She explained that when a child is sitting in the front seat, even the most minor of accidents could result in some serious consequences. She highlighted that a child in the front seat can either be flung out of the driver’s arms, can hit the dashboard or the windscreen or be crushed by the airbags. When highlighting all the possible scenarios, she has just one question, “Why would anyone ever even risk that? Your child doesn’t know what’s right, but you do! Don’t be an idiot, children are not TOYS!” 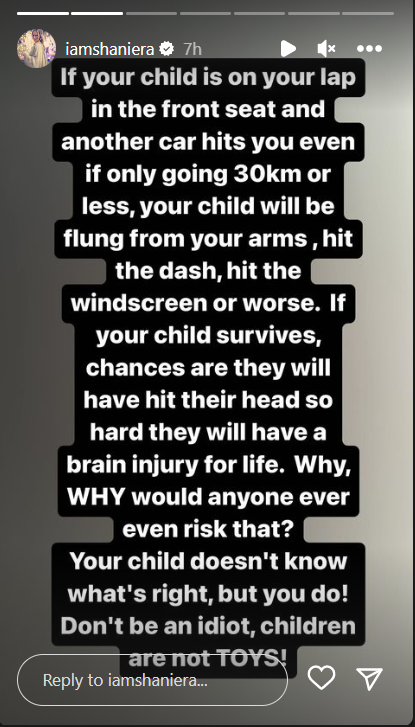 Shaniera Akram made it abundantly clear that her anger had nothing to do with Feroze Khan as a person but rather than the harm he was putting the child in, “I have nothing personally against any celebrity or influencer, they can post whatever they like. But if and when they blatantly do dangerous things that put children’s lives at risk and post them doing it, it’s not ok and I can not ignore it.” 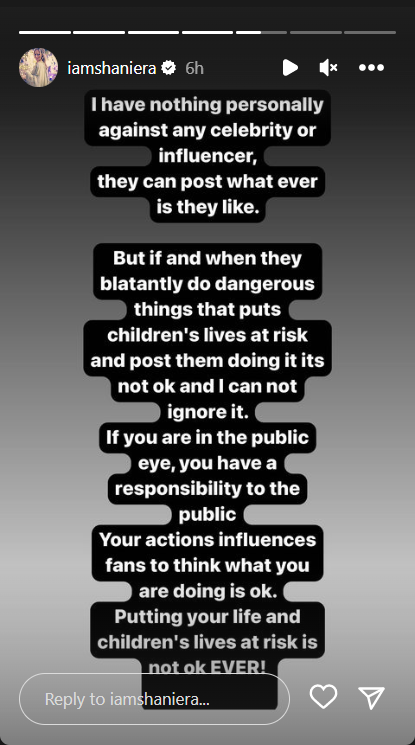 She also reminded celebrities of their duty to their fans, “If you are in the public eye, you have a responsibility to the public. Your actions influence fans to think what you are doing is ok. Putting your life and your children’s lives at risk is not ok EVER!”