In Betiyaan, no one’s a good guy 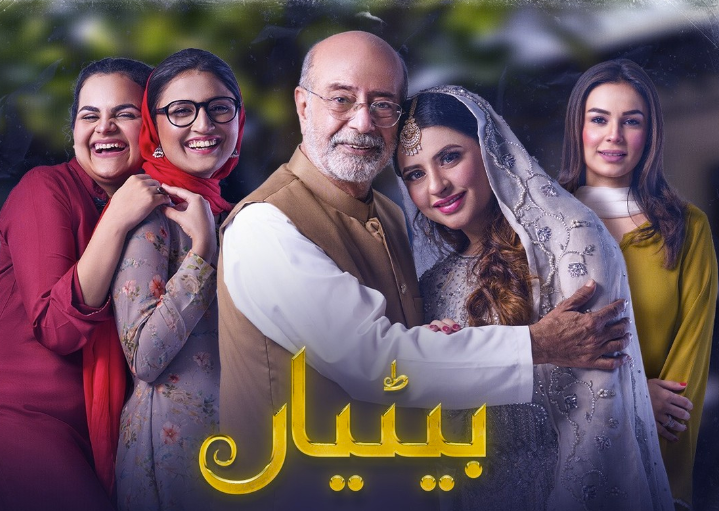 KARACHI: A drama with a premise of five daughters, all of marriageable ages, is a sure cut recipe for disaster. And that is exactly what ARY Digital has shown in their on going drama Betiyaan. The serial is full of unbelievable plot twists and villains who seem to have nothing better to do in life. Men, women, relatives, in laws, everyone has it out for the girls. Despite the fact that the drama had potential to be an example of a healthy loving relationship between a father and his daughters and even between spouses, all of that is overshadowed by the fact that everyone is a villain in the show.

The men of the show

The drama really did set high hopes when it came to portraying healthy father-daughter relationships and to cement that was Syed Muhammad Ahmed who plays the role of a loving father so perfectly. While like any other father he worries about his daughters and their futures, he also knows when to step up for them. He takes a stand for Fizza (Fatima Effendi) so far as to stand by her in taking a divorce when her marital life becomes torture and also for standing by Ayeza after she returns home from running away on her wedding day. It would be unfair not to mention Fizza’s father-in-law (Sheheryar Zaidi) who goes to every length to ensure his daughter-in-law is treated with respect and dignity and takes his son and wife head on.

But for most of the part and for the betiyaan in the ARY Digital show, the men are the root cause of all their problems. Whether it is one scorned ex-boyfriend Saad (Osama Tahir) pulling the “uss nay zeher khaliya” stunt and ruining Ayeza’s (Mahenur Haider) wedding and then becoming stalkerish to the point she literally becomes the scarlet letter of the neighborhood. While his actions are made to seem as though he’s doing all of those things for Ayeza, as usual men really do manage to screw things up for women and act surprised when they aren’t amused or aren’t falling at their feet. Once Saad does marry Ayeza, he takes a complete 180 and turns on his own wife. All for the sake of a father who has been absent from his life. Too dense to see what is happening in front of him and too immature to take a minute and assess the situation, he is hell bent on making Ayeza suffer.

Speaking of Saad’s father (Adnan Jaffer), he is nothing short of a psychopath. From being absent from his son’s life to suddenly being so vested that he fakes an illness just to meddle in his son’s marriage, to the point he literally is forcing him to sign divorce papers and have an affair! Saad’s father is a rebel without a cause, other than being an example of all things wrong with men! And to think women are called manipulative!

The women of the show

As if having men making your life miserable wasn’t bad enough, Betiyaan decided to up their game by making women equally problematic. Sabahat Ali Bukhari is the prime example of all that is wrong with women, in the most stereotypical of ways. Between being angry at her husband for choosing a girl below their social status for their son to hating on one sister for the mistakes of the other, she really does need a lesson on letting things go. While her resistance to Fizza stemmed from her son’s reluctance to accept his wife, her scorn has no reason especially when Danish (Fahad Sheikh) and Fizza are happily married. But she will waste no opportunity to act bitter and get an earful from just about everyone.

And if we thought Fizza had a bad mother-in-law, little were we prepared for Anum’s (Tania Hussain) villain to take her stand. While it’s unclear what this mother-in-law’s issue is (not being able to celebrate her only son’s marriage frivolously), she really does go out of her way to torture poor innocent Anum. From antics to gain sympathy from her sons, to downright lying, to keeping her daughter-in-law a literal prisoner at home, it’s like she’s the embodiment of every unmarried girl’s marital fears!

ARY Digital has shown in Betiyaan that the villains are also present in your own home. For a good portion of the 60 plus episodes aired so far, the girls’ aunt (Javeria Saud) has projected her own traumas onto the girls. Her sharp tongue, her plotting and planning and constant accusations make us wonder if the girls will ever have it easy. They don’t have peace of mind at home and they definitely don’t have it outside either!

However, despite the fact that nearly everyone in their life is either a homewrecker or literally insane, the five sisters have kept her heads held high. They do not back down in the face of adversity, they have each other’s back and they prove that girls can also take care of their fathers!