The Phallacy of Faris Shafi 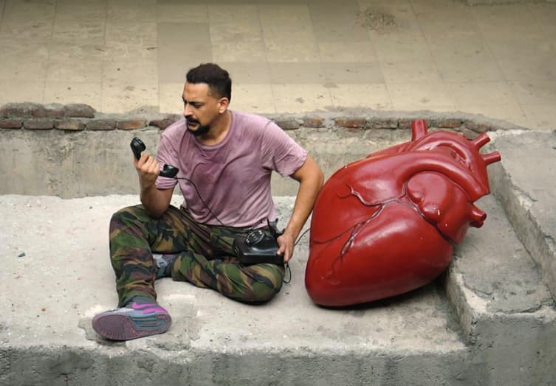 KARACHI: Faris Shafi and Talal Qureshi just dropped their latest song called ‘Vitamin D’ sending the internet into a frenzy. Fans could not get over their excitement about the new song and many gushed over some of the more hilarious lyrics such as “aap ke munh pe chapair hai (a slap in your face)” and “Tum saray plastic k wrappers, you belong in garbage canister.” However, amidst all the excitement, what many failed to realize is just how problematic the song is. Unnecessary and crude, the song also belittles women just for the sake of it. But the problem isn’t just with Faris Shafi and ‘Vitamin D’, it’s with the rap genre as a whole.

Admittedly, Pakistanis aren’t used to hearing cuss words or crude language being used in a very normalized manner. With PEMRA being so uptight about their censorship, bad language and sexual innuendos really do not make it to screen. So for many hearing Shafi sing about his genitals, “Ap kab meray l** say uthaingay” comes as a nasty shock. And ‘Vitamin D’ isn’t his only song that uses such crude language. Most, if not all, of Shafi’s songs have quite a rap sheet of curse words and it seems as though he admits in his lyrics, “Gaaliyaan main deta phiroon aadatan (I go around cussing out of habit.)“

Before the critics argue that his songs are meant to be enjoyed by a more mature audience and maa behen ki gaaliyan shouldn’t come as a shock, that is not the only objectionable thing about Faris Shafi and his songs. It is 2022 and women are so much more than just their bodies and it’s time we move beyond degrading women with names such as bitch and whore. But, it seems as though the rules don’t apply to the Pakistani rapper who sings about women being disposable and either something to degrade or have sex with, and sometimes even both.

In ‘Vitamin D’, Faris Shafi tells his competitors that he’s more successful than them and earns more and so that is all that is needed to steal their girls from them. What’s worse is that if he isn’t calling women bitches, he’s calling them “bachiyan” which is so inherently problematic. And if it isn’t his money they are after, they want him for his body, “body behn*** aisi keh saari bachiyan gheeli.” Women are, as explained by Faris Shafi, only after superficial things and somehow that justifies him treating them like absolute crap.

In ‘Lafz’, Shafi constantly disrespects the woman he is addressing by calling her a female dog, “Bitch answer your phone don’t cancel on me.” He objectifies her and sings about her ass and the song becomes more crude as he talks about the “sexathon” and its effect on the lady and it also becomes increasingly violent as he tells her, “Tera Gala dubaoon. Wait a minute I mean gana sunaoon.” In 'Hum', Shafi very eloquently sings about how he plans to please a woman and “Fu** her like a bitch.” Even though the song is about his daddy issues, he feels the need to drag a woman through the dirt with these unnecessary lyrics.

no man can do both
-listen to faris shafi
-respect women

But perhaps it would be unfair to place the blame squarely on one man’s shoulders. The reason why Faris Shafi and songs like ‘Vitamin D’ and ‘Lafz’ are made examples is because there aren’t a lot of rappers in the Pakistani music industry like him. And it isn’t that the problem lies with Shafi as a person. Rather the problem lies with the rap genre as a whole.

Can we start talking about the #misogyny in rap lyrics now, or is that still too taboo? #hiphop #misogyny #ViolenceAgainstWomen

Rap is a male dominated and incredibly sexist genre. Like most of Shafi’s songs, most rap songs also refer to women as bitches and whores. The lyrics either call them out for being gold diggers or for being sex objects. While Snoop Dogg sings about, “Bitches ain’t sh*t but hoes and tricks” (which is the literal title of the song), Ye sings about how, “These bitches surroundin’ me, all want somethin’ out me. Then they talk about me.” Most songs also focus on the rappers and their genitalia and women performing sex acts on the rappers because as per the men that is all the the women are good for.

a big portion of the rap scene just didn’t get the memo that, oh yeah, women are human beings too #sexist #howareyouevenfamous #twochainz

And if we look past the slut shaming lyrics and the videos with almost nude women whose entire purpose is to shake their butts while men sings about how low they think of them, you will also come to know how violent the songs turn against women. Eminem has constantly rapped about either killing his ex-wife Kim, “Now bleed bitch, bleed!! Bleed bitch, bleed!! Bleed!!So long, bitch you did me so wrong” or how he fantasized about women dying, “I hope you hear this song and go into a cardiac arrest. My life would be so much better if you just dropped dead.” And then there are songs like ‘One Less Bitch’ by N.W.A that are the whole package. The song objectifies a woman while calling her a bitch and then goes on to detail how the rapper killed the woman.

So while women still fight to be treated with respect, it is about time the rap genre does the same.