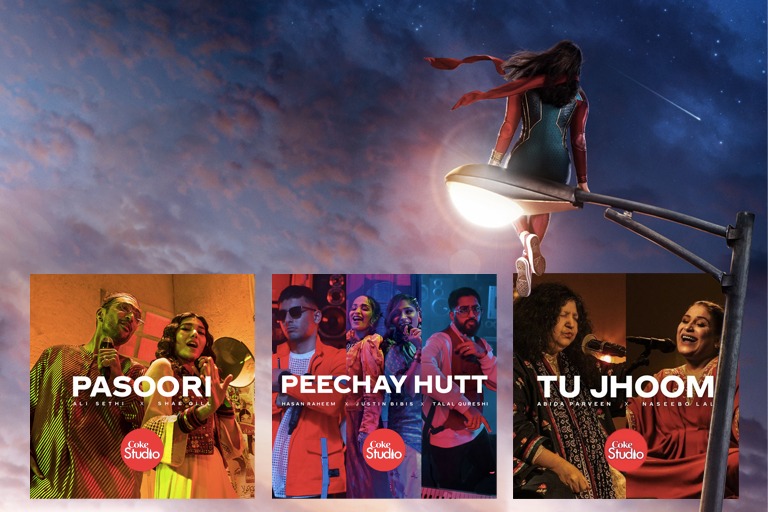 KARACHI: Ms. Marvel is one of the most anticipated shows to hit the screens this year. Desi audiences are raving about it for all the right reasons. With an inclusive cast and crew which includes Pakistani actors such as Samina Ahmed, Nimra Bucha, Mehwish Hayat and Fawad Khan, we did not think it could get better. And then it did! Ms. Marvel has wowed us further with its impressive desi soundtrack! Here are some songs you might have picked up on while watching the show!

The veiled singer was one of the first people to announce that her song ‘Rozi’ was going to feature on the soundtrack of Ms. Marvel in the very first episode! She took to Instagram to announce the news and wrote, “I am feeling greaaatttt and so lucky that i got a feature in @msmarvelofficial ’s 1st episode.”

‘Peechay Hutt’ was the party anthem of 2022 and so it comes as no surprise that it made its way to the Ms. Marvel desi soundtrack! Producer Xulfi shared the exciting news on Instagram and wrote, “Elated to see #PeechayHutt from our @coke_studio season 14 becoming a part of the @marvel universe in @msmarvelofficial. Congrats to everyone involved in the effort.”

The Coke Studio success did not end there. The critically acclaimed collaboration between Ali Sethi and Shae Gill continued to make waves when it was announced it would be the second Coke Studio track to be featured in the MCU!

Third time’s the charm! Xulfi was on a Coke Studio x Ms. Marvel roll when he announced that the third song to be featured on the soundtrack was ‘Tu Jhoom’. “We started our CS season with this song to begin unveiling and narrating all stories of the season. It’s a blessing and it’s an honour that this became a part of the Marvel Universe.”

If you thought the Ms. Marvel’s desi soundtrack would only include latest hits, you would find yourself mistaken. In the very first episode, right after Kamala fails her driving test and has to go wedding shopping with her mother, audiences were pleasantly surprised to get to hear 1966 track ‘Ko Ko Korina’ playing in the background!

No desi wedding is complete without song and dance. In the episode 3 of Ms. Marvel the song ‘Hadippa’ from Dil Bole Hadippa plays as Kamala and her cousins dance at her brother’s wedding!

It would be criminal not to include the Tesher and Jason Derulo party anthem as part of the Ms. Marvel desi soundtrack and so they made sure to include it in episode 2 as Kamala and Nakia drool over Kamran!

It is fair to saw, whoever came up with the Ms. Marvel desi soundtrack is a genius!