How to teach children good vs bad touch

KARACHI: One of the saddest ways in which desi parents fail their children is through their inability to talk to them about their bodies. Whether it is teaching kids about what periods are or what a good touch versus a bad touch is, we expect our children to know things without being told. And if the unthinkable ever does happen, we wonder how we missed the signs. Desi parents simply do not know how to touch upon sex education with their children. However, if you are a parent and do want to talk to your children about what a good versus bad touch is, here is how you can do it!

Talk to them about their bodies

Contrary to desi belief, there is nothing shameful about our bodies. Children should be taught (age appropriate) names of their body parts, including their genitals. While talking about their bodies, also explain the differences between the female body and male body. Children also need to be taught that their private parts need to be kept covered and safe and so not everyone can uncover their particular parts. 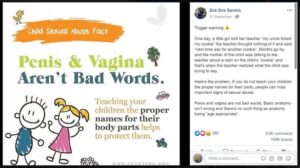 Predators often give genitals fun names or descriptions to encourage children to explore them and take advantage of that curiosity. By teaching children these lessons, you can protect them from being manipulated or having their curiosity roused about body parts.

Give them ownership of their bodies

An important part of teaching children about good versus bad touch is giving them ownership of their bodies. What does that mean? 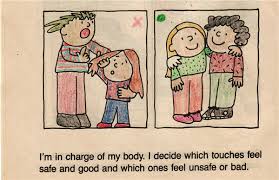 It means allowing them to decide when they want to be hugged or kissed, even by their parents. It is very important to allow a child to express when they feel uncomfortable, especially around grown ups. Children are often unable to express what they are feeling with words and often times predators scare children into silence. By allowing them to express their emotions, you are also allowing yourself as a parent to pick up on their cues.

Point out safe and unsafe zones

The conversation about good and bad touch can be confusing for children. And so, it has to be broken down as much as possible for them. That means pointing out safe zones of a touch. For example, a pat on the head can be considered safe or a fist bump from an elder cousin is also safe. But a pinch on the bum or a hand on the chest is definitely not a good touch. 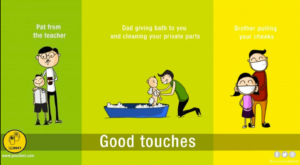 It is also important to tell your children that only their parents (or other primary caregivers) can wash their private parts. Anyone else who offers should be reported immediately. 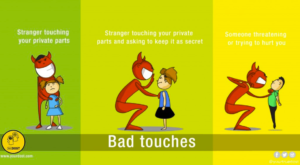 Teach them to confide in you

I was around 8 when I was given the good touch-bad touch talk. A few days later, a friend’s father, who enjoyed teasing me to rile me up tried to hug me and after telling him politely thrice not to hug me, I ended up slapping him. When my mom found out, she asked me why I did what I did and I told her in reference to the talk we had. She never made me apologize for slapping the uncle and never reprimanded me either. That day I learnt, that my mother would always believe me and keep me safe.

Which is very important when it comes to teaching children about good and bad touch. They need to know that if they ever feel uncomfortable, if they ever feel cornered, they can come and talk to you. That you will believe them and will protect them. 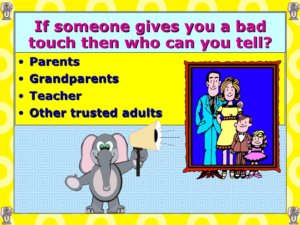 Predators often get away with sexual abuse because they tell their victims that no one will believe them. Often the abusers are family members so parents refuse to believe their children when they confess which breaks them further. As a parent, always believe and protect your child!

Keep reminding your children about good and bad touches

Once you have had the talk with your kids, make sure you give them reminders time and again to reinforce the concept. The reminders do not have to be intense, you can make it into an activity like asking them what a good touch is for them and how it makes them feel. Or who can be giving them a bad touch.

Similarly, when you take them out to meet new people, remind them about body safety and how they need to protect their privates and if anyone makes them uncomfortable, you will be there to listen. 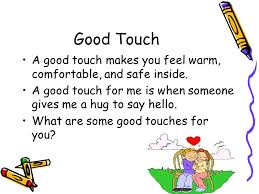 It is never too late to have the conversation with your children and so if you haven’t already, go talk to them!