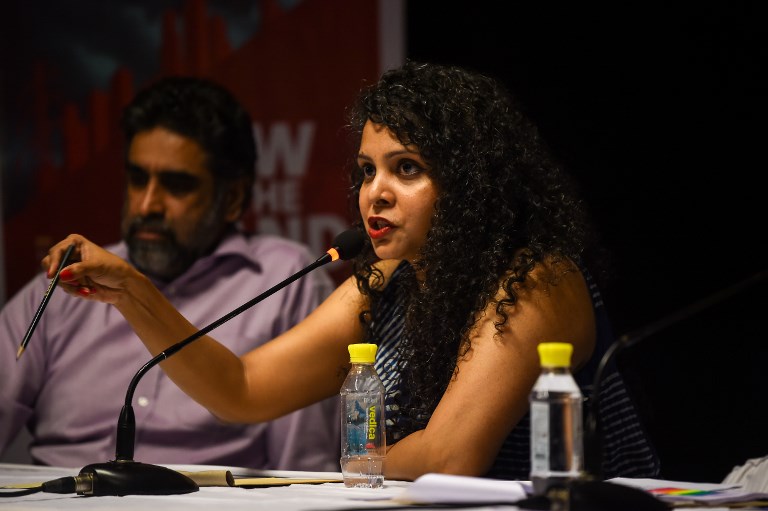 Indian journalist and author, Rana Ayyub speaks during the launch of her self published book ‘Gujarat Files’ in New Delhi. PHOTO: AFP

KARACHI: Rana Ayyub has been a prominent journalist in India and the rest of South Asia for 13 years. She has worked as the editor of Tehelka, an investigative magazine, and is most noted for her work on Indian Prime Minister Narendra Modi’s complicity in the Gujarat riots. She also writes about extra-judicial killings, minorities and lower-caste groups in India, and as a result has had her fair share of intense trolling and harassment.

But what happened to her this month was supposed she was not prepared for.

Speaking at the GEN global editors network summit in Lisbon on Friday, Ayyub described the ordeal she had to face as a result of a fake tweet shared by a million people, prompting the UN to ask the Indian government to assure her safety.

“On April 20, I spoke about freedom of press at an awards ceremony in India, and how freedom of speech is being stifled in newsrooms. A day later a fake tweet was generated in my name that I support child rapists in the name of Islam,” said Ayyub, who belongs to the minority Muslim community in India.

The tweet went viral, and Ayyub began receiving a spate of gang-rape threats. This was followed by another fake tweet of her stating that she hates India and Indians, which was shared 200,000 times.

And this isn’t all. She went on to describe how a contact of hers from the ruling BJP party sent her a manipulated pornographic video with her face morphed in it. This video was also circulated amongst thousands.

“It was on everyone’s phones. My father’s phone, my brother’s, my neighbour even asked if that was me,” she said. Soon enough, her number and address were leaked online and many men began sending her naked pictures of themselves.

She went on to claim that a fan page of a popular regional right-wing leader in India posted saying, “Look at what we have done to you Rana Ayyub. Next time you spread hatred against Modi and Hindus, we’ll get worse” – again shared thousands of time.

Ayyub shared that over the past few years, every time she wrote a story, the hashtag #RanaAyyubSexy starts running with the most obnoxious images.

“Yes, the kind of journalism I do is not palatable to the dispensation but does that mean you target a woman journalist like this?” she said.

She concluded the talk by saying that the UN took suo moto notice of the incident and have approached the Indian authorities themselves, as they believe her life to be under threat. Her colleague was shot dead last year after she published ASyyub’s book in a regional language, and the UN believes that she might be next.