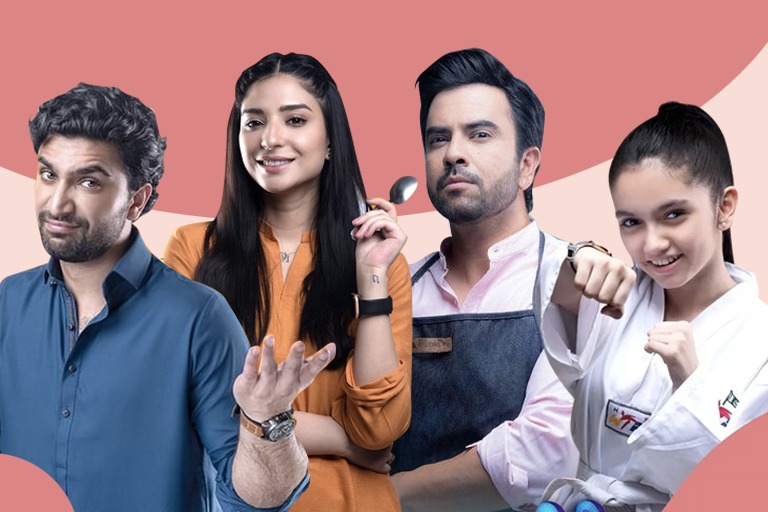 KARACHI: Out of all the Ramadan specials that went on air this year, Hum Tum turned out to be the most impressive. Not just for us, but drama enthusiasts at large found the show to be a breath of fresh air. However, it is not unusual for local dramas to start off an a high and then go down the slippery slope of stretching the drama and narrating age-old stories. Some might have expected the same to happen to the Ahad Raza Mir and Ramsha Khan-starrer as well. However, with episode 9 on air, Hum Tum continues to be in the lead. Each day, we find something new to appreciate about the show. But to prioritise them, here are a few reasons we think the Ramadan special is worth our time!

Our biggest reservation about most Pakistani dramas is the fact that most actors do not fit into their roles. We often see 30-something-year-olds playing college students while a few others are made to play grandparents simply because they have a single grey streak in their hair. One of the reasons why Hum Tum is so relatable and easy to watch is because its actors fit their roles perfectly. Neha (Ramsha Khan) and Adam (Ahad Raza Mir) are both university students in their mid-20s while Maha (Sarah Khan) is an M. Phil student slightly older than the other two. Sarmad (Junaid Khan) is even five years older than Maha and the owner of a restaurant.

Ahad Raza Mir and Ramsha Khan fit in perfectly as the more notorious siblings while Junaid Khan is easy to love as the chef who wears his heart on his sleeve. Sarah Khan is the right choice for the eldest sister who is more focused on her health but also knows how to have a good time when she wants.

As desis, we hold our siblings very close to our hearts. But we also would not let go of a chance to eat them alive over the smallest argument. And that is exactly what the Qutub sisters (Maha, Neha and Sasha) portray in the drama. The three sisters are at each other’s throats most of the time but also make the best team when it comes to facing their father together. On the other hand, Sarmad and Adam make the sweetest elder brothers of an only-sister, Milli (played by Aina Asif). From painting their sister’s nails, to making her hair, the equation these siblings share will melt your heart.

If there is one reason why Hum Tum has received praises, it is because of how many stereotypes it challenges. Maha, Neha and Sasha are three sisters and while their father sees them as messy and irresponsible because they aren’t good at house chores, all three of them are very smart. Maha (Sarah Khan) is pursuing an M. Phil and while she is divorced, the topic is never brought up more than once, nor are the details of her past discussed. Neha (Ramsha Khan) is a science genius while Sasha (Anoosheh Rania) can hack into almost anyone’s account.

While we love how Saima Akram Chaudhry chose unconventional fields for her female characters, she also shattered numerous stereotypes through Sarmad’s (Junaid Khan) character. Sarmad is a chef who not only owns a restaurant but also loves to cook for his loved ones. He takes on most of the kitchen responsibilities instead of expecting his mother to spoonfeed grown men. His sister, on the other hand, Milli (Aina Asif) attends taekwondo classes and is working her way up towards a black belt. Adam (Ahad Raza Mir) is a clean freak and loves cleanliness and order. Hence proving that cooking and cleaning are basic life skills that anyone can adapt and not simply restricted to the female gender.

Not to forget Neha’s Tiktok dada and Adam’s nani, both of whom earn a living by doing what they absolutely love instead of sulking around in old age and pretending as if their lives have ended.

As funny as Hum Tum might be, it also addresses some serious issues. Laugh as much as we want, we cannot ignore the fact that Qutubuddin (played by Adnan Jaffar) very much wanted a son instead of three daughters. While he takes immense pride in his daughters’ academic achievements, he also criticizes them for not being domestic enough. The girls are constantly compared to their neighbours who are men, who their father sees as the ideal children. Qutub often holds his wife (played by Arjumand Rahim) responsible for raising careless daughters but never praises her when the girls achieve first positions in college.

On the other side of the boundary wall, Sultan (Farhan Ally Agha) is a completely healthy and functional man who refuses to work. Instead of looking for employment, Sultan lives off of his sons’ money which he then uses to make bets (that he often loses). Instead of being grateful towards his family, Sultan then plays the victim in the situation. His wife is helpless and often complains to her mother about getting her married to a man who is good for nothing.

Since Hum Tum is a humorous show, these topics are approached in a light hearted manner as well, but the team knows that the audience will pick up on the subtle messages being given by the show. And that is exactly why it is worth watching.