Being a female lawyer in Pakistan 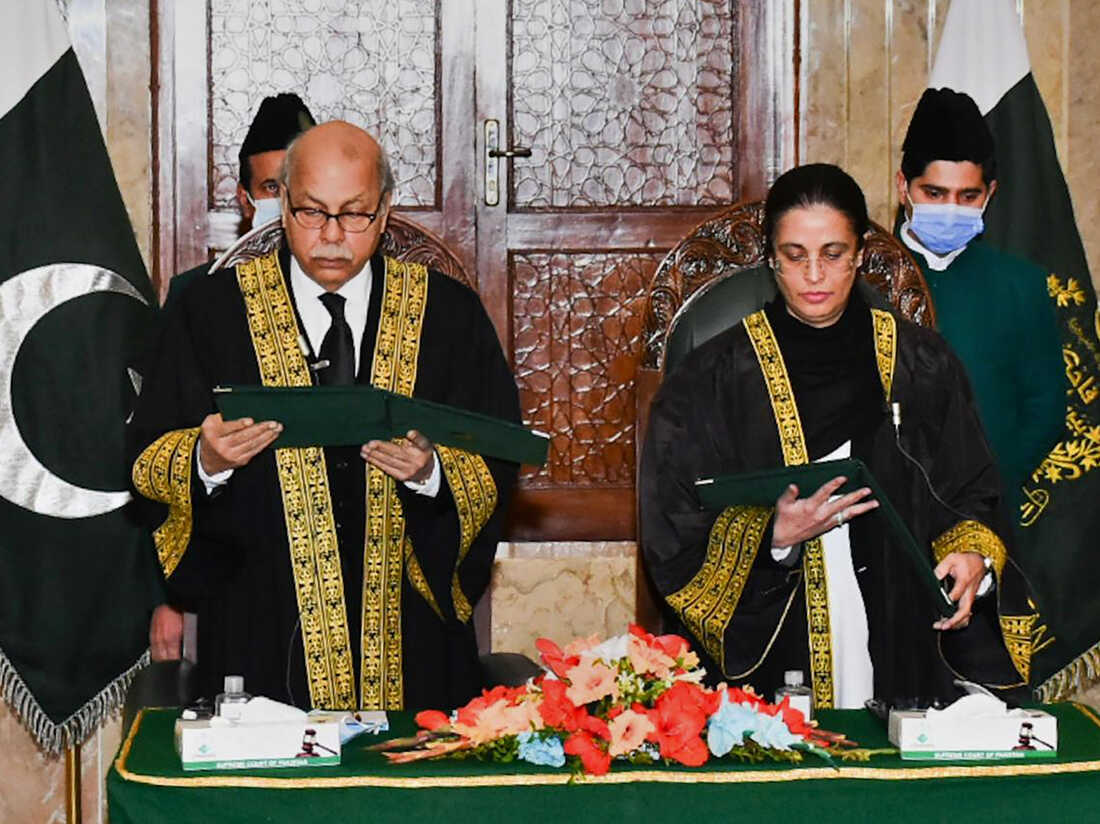 In this photo provided by Pakistan’s Press Information Department, Pakistan’s Chief Justice Gulzar Ahmad, left, administrates the oath of office to Ayesha Malik, the first female judge of the Supreme Court of Pakistan, during a ceremony, in Islamabad, Pakistan, Monday, Jan. 24, 2022. Malik’s swearing-in on Monday was a landmark moment for the Islamic nation where women often struggle to get justice — especially in cases involving sexual assault. (Press Information Department via AP)

KARACHI: In the Supreme Court of Pakistan, on a bench of sixteen men sits a woman who did the unthinkable. For the first time in 75 years, a woman, namely Justice Ayesha Malik, became the first female judge of the Supreme Court of Pakistan. She serves as a beacon of hope for many women and female lawyers who are often discouraged from taking up law as a career. Here is how she has done it.

Historic. Justice Ayesha Malik takes oath as the first ever woman judge of Pakistan’s Supreme Court. Also a symbol of how women’s struggles over the past four decades have pushed back patriarchal structures and gender stereotypes.
Long way to go but small victories matter. 👏🏽 pic.twitter.com/cI3nUV2Ar0

In order to be nominated for Supreme Court Judge, a person needs to have five years’ worth of experience as a Judge of High Court or 15 years’ experience as advocate of High Court. Ayesha Malik ticked all boxes and was one of the most experienced judges in Lahore. Yet, there was extreme pushback against her nomination. Lawyers staged protests and the backlash was so great that the decision about her nomination was delayed by a year.

Cutacut reached out to Ismat Mehdi, a lawyer of the Supreme court, for a comment on the matter. “Backlash or protest by large associations was absolutely uncalled for,” she explained that the backlash had less to do with the seniority principle and more to do with gender. “They were insistent upon applying the rule of seniority, according to which Chief Justice of Sindh High Court, Mr. Ahmed Ali Shaikh should have gone. Unless Mr. Shaikh was nominated or requisitioned, he could not have been elevated, so there was no justification at all for making her (Ayesha Malik’s) appointment an issue.”

Ismat Mehdi, despite being an experienced lawyer and loving her job admits that “The law demanded all my time.” As a woman, she had double burden on her shoulders. Not only did she have to prover herself as a lawyer, she had to prove herself as a female lawyer. Unlike her male counterparts, not only did she have to keep up with her ever consuming job, she also had to raise her children and manage her house. As if juggling numerous things was not difficult enough, “Unsurmountable hurdles are created on different levels in different ways to stumble her [women] and make her path difficult for journey forward.” She admits, “A woman is not welcomed encouraged or allowed to come-forward.”

Talking about Justice Ayesha Malik, Mehdi commented, “Justice Ayesha Malik’s nomination to the Supreme Court has broken the glass ceiling, and her appointment will pave the way for increased opportunities for women in the legal field. This is an important development for Pakistan. She is a competent judge and a role model for women in the judicial and legal field. We have every reason to feel proud of this elevation.” However, while the elevation “is a huge leap towards trying to change the mindset, the mindset will not be changed by elevation alone. It requires education, upbringing, moderation in behavior and just approach to life for providing equal opportunity to the opposite gender.”

Cutacut also spoke with Sheheryar Zaidi, an Advocate of the High Court, to get a male perspective. Ziadi acknowledged that yes, “The legal profession makes it almost next to impossible for women to practice.” He believes it boils down to two things. Firstly, it is the internalized misogyny that looks down upon women and cannot accept them doing something that is considered a man’s job. He says it’s because society has been conditioned to treat men better than women and this, unfortunately, is carried forward into the legal profession.

Secondly, he explains it in terms of practicality. Law requires lawyers to get down and dirty. From greasing hands to cussing others out, these are all part and parcel of the job. Making friends, giving and taking favors are all part of the equation to be able to rise up, especially in the lower courts. Women are considered to be too delicate to withstand the conditions of the lower courts.

Sheheryar Zaidi admits that there is a lot of locker room talk that takes place in the High Court Bar Room. He shared some very disturbing conversations he had over heard and even more disturbing is the fact he says that it is not a rare occurrence.

NB: some words like “madam”, “mam” or “mohtarma” may be terms of respect but depending upon the tone & connotation, such as if they are being used to avoid the correct professional title then they may become unprofessional. pic.twitter.com/MSDYeGD6Vk

He also shared that since judges are more respectful towards female lawyers, perhaps because they understand their struggle, male lawyers are inclined to believe that womenget special treatment by virtue of their gender and that makes the men look down upon them even more.

However, despite the aura surrounding the legal profession and women, there has been change over the years. Barrister at Law Maryam Malik says, “The system is designed in a way that it is easier for men to adapt to it. The gender gap has always been there but over the years, I have seen it diminish and I have seen more and more women joining the field as litigators so even if it is felt that the field is ‘unforgiving towards women’, more and more women are joining the profession.”

She admits that at the start of the career, she did feel the double burden that came with being a woman in the field but overtime she has realized that, “My excelling as a lawyer has less to do with my gender and more to do with my capability and competence. The prerequisite to being an excellent lawyer is not gender, it is the amount of time and work one is willing to put into their practice.”

Malik admits that, “I have heard misogynistic remarks being shared about women in general. But no one has said anything to my face. And there have been some demeaning situations. But I believe those situations speak more about the client/person refusing to acknowledge me than about me and/or my capabilities.”

But she does point out that over the course of her career she “had the privilege of working at some of the biggest law firms in Karachi and I have been trained by exceptional senior counsel (all three of my mentors have been male counsel). I have never been treated differently to my male colleagues and have always been given the same amount of responsibilities as any of the male colleagues.”

This goes to show that there is a slow shift in how women are being treated and in the mindset of lawyers. The shift may be slow but something is better than nothing.