The women of Aakhir Kab Tak

From Noor's courage to Safia's transformation, we are in awe of the strength of these women 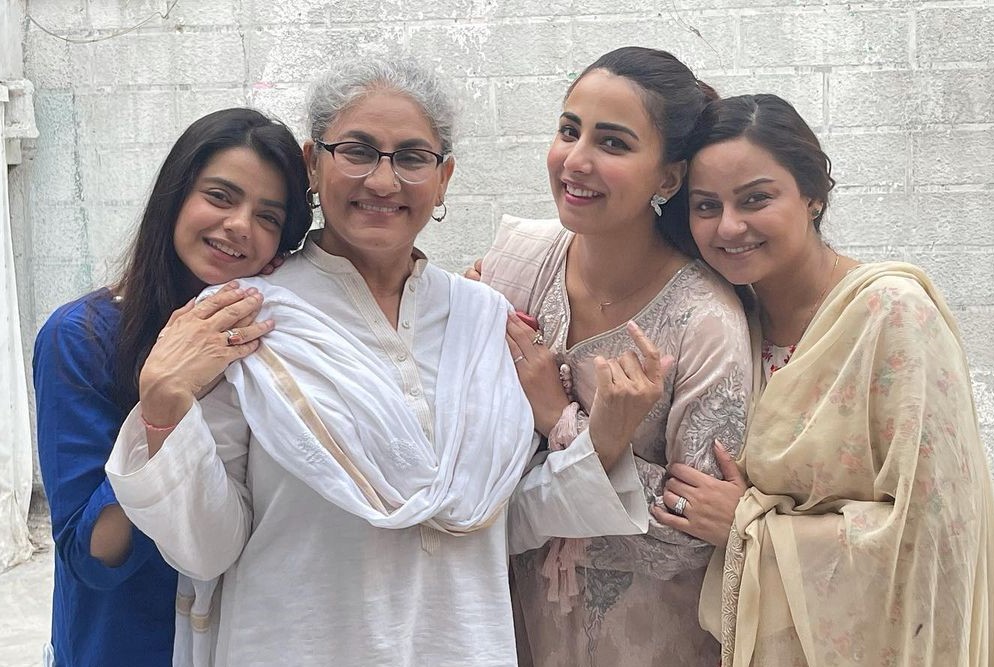 KARACHI: Drama serial Aakhir Kab Tak began with a sensitive story to tell. Fajr (Srha Asghar) is raped by her tutor and is told to keep quiet about it by her mother, Safia (Juveria Abbasi). While Fajr’s elder sister Noor (Ushna Shah) wants to seek revenge from her sister’s rapist and raises her voice on most matters, she is held back by her mother and her family in general. Fajr and Noor live with their extended family who clearly see women as the weaker gender. Noor is labelled ill-mannered while Fajr’s fear is equated to her being mentally unstable. Safia is the most oppressed of all characters and is physically and verbally abused by her husband and in-laws. While we may have earlier been frustrated with Safia being shown as a passive and oppressed bahu, recent episodes of the drama have us in awe of its women.

Ushna Shah’s character Noor was vocal and confident from the very beginning. While many witnessed the injustice happening inside her house, Noor was the only one who repeatedly raised her voice against those injustices. She was never afraid to stand up to her uncle, to her male cousin who constantly harassed her sister Fajr. She fought for her and Fajr’s right to education. As the story of drama serial Aakhir Kab Tak progressed, Noor’s father became paralyzed, leaving her to look after his warehouse. In recent episodes, Noor has become an example of how women are equally capable (if not more) of running a business and taking the lead when men falter or are no longer around. Noor is on her way to financial independence and thrives when the same relatives who earlier treated her like dirt now have to come to her for money. But the biggest role that Noor has played is in making her mother realize that she is a human on her own, one who deserves to be treated with respect and dignity.

Safia’s character in Aakhir Kab Tak started off as yet another mazloom (oppressed) woman whose sole purpose in life is to serve her family and then get abused by them also. However, her transformation in the recent episodes has been one of the most amazing ones as well. Some viewers might have lost interest in the story but Safia’s transformation is sure to make them return to the drama. Oppressed for years, Safia tries to transfer the same silence and fear onto her daughters as well. Now that her husband is paralyzed and entirely dependent on her, Safia realizes that there is very little harm that anyone can bring to her or her daughters. With years of frustration bottled up inside her, Safia snaps at her mother-in-law (Gul-e-Rana) who loves to torture her. Safia also realizes what Fajr had been trying to tell her about being harassed by her cousin and confronts him in front of his family as well. She now lets her hair down, puts on lipstick when she is alone and sees herself as a woman and a human being, who deserves to live life on her own terms. Watching Safia find herself again is one of the most powerful aspects of the show, one that is sure to leave audiences cheering for the character.

Srha Asghar is clearly impressive in her portrayal of Fajr in the drama. While Fajr may still have a lot of unlearning and opening up to do, it is only fair for her to progress slowly after all the trauma that she has been through. Silenced by her mother since childhood and constantly labeled as mentally unstable by her family, Fajr is on the road to recovery after being married to Saim (Haroon Shahid). Going into a new home and living with a supportive husband, Fajr finds the courage to start being vocal about her problems. She begins to trust and love her husband and receives the same trust in return. Being a rape survivor is traumatic to say the least and Srha Asghar beautifully captures the fear and paranoia in her performance. Fajr’s character also confronts Safia about being silenced on various occasions, a mistake that Safia admits to have made. Aakhir Kab Tak explores the mother-daughter relationship and the uncomfortable conversations that often need to be had in order to make a woman’s space in this otherwise unjust world.