Who is the Celestial in Eternals trailer?

Has there been an embryo implanted inside of Earth? Does the "Emergence" mean a celestial is about to be born from our planet?

KARACHI: MCU has done it again! The trailer for Eternals has raised the bar higher than we expected it to. The first celestial we met in the MCU was Ego, Starlord’s father, a living planet, who after becoming aware of himself and his conscience, embodied himself into a human extension of himself. “I don’t know where I came from exactly. The first thing I remember is flickering. Adrift in the cosmos utterly and entirely alone,” he told Peter Quill in Guardians Of The Galaxy Vol 2.

Ego was initially a brain-like organism, who with time, added layers upon layers of the protective sheath around himself by manipulating surrounding matter, and formed a planetary body (this is why he can have a humanoid extension of himself).

However, the celestial we see in the upcoming film Eternals’ trailer, we see something very different from the celestial that Ego was.

While Ego does extend himself from a mere conscience floating within empty space, that quality is unique to his character. Nearly all other celestials have birthed themselves after inhabiting in the heart of planets as embryos implanted inside an egg, and absorbing matter and energy from their surroundings as nourishment, only to crack the egg 9in this case, whole planets) when they are ultimately born as celestial beings. So Ego’s case might be different, and the scenario we are looking at in the trailer for Eternals really will follow the good ol’ classic way of birthing a celestial through a planet. Or maybe not? Maybe they too, discover the brain?

Probably why Eternals have gotten involved at this point – a superpowered immortal race created by celestials. Tony Stark snapping half of the universe back into existence must have caused an enormous energy surge, which may have caused the “seed” to mature sooner than it was expected to. All that energy perhaps accumulating into an event that will birth the celestial on Earth – Emergence.

Some celestials to have played an important role in the comics are Eson the Searcher, Godhead, Arishem The Judge, Exitar the Executioner, Tiamut, Progenitor, The One Above All, etc.

We have seen a glimpse of Eson the Searcher and glimpses of his deadly execution of a planet in Guardians of The Galaxy Vol 1. 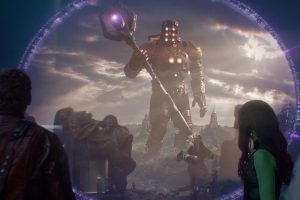 We have also seen a severed head of a celestial forming Knowhere a major checkpoint in the galaxy, the head large enough to be a planet on its own.

The celestial we see in the trailer is pretty similar to Eson in the sense that he too has six eyes, however, this new celestial expands over an entire horizon and can be seen harnessing energy. Could he be Arishem The Judge? The two have pretty much the same color scheme going.

In the trailer, one of the Eternals, Sersi, tells Black Knight (played by Kit Harington) that she and her kind were told not to interfere in human matters unless Deviants were involved. To which Black Knight asks, “by who?” and the next shot is that of a red-colored celestial sitting in a way that almost makes it seems like he is on a throne.

So the questions are, could it be Arishem the Judge who sent them to combat the deviants? Is the threat simply deviants? Who by the way have also been created by celestials alongside Eternals and Humans. What really is the “emergence” and why are celestials involved? Here’s to standing on our toes as we wait to find out!