Celebrity statements we want an explanation for 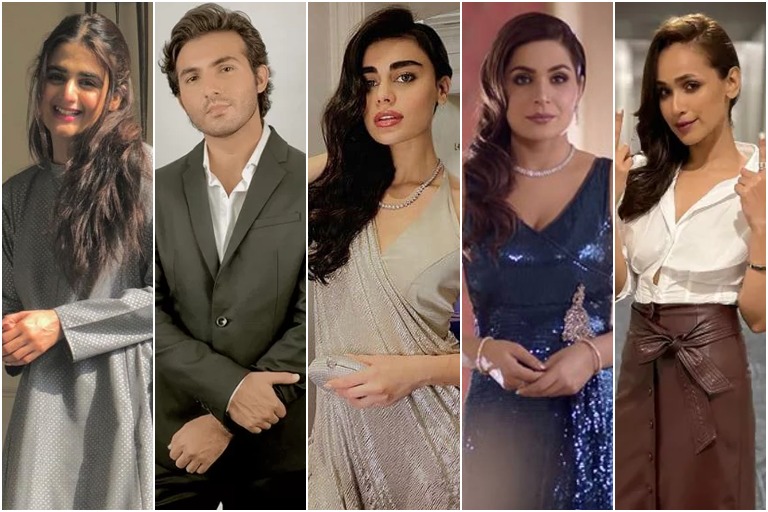 KARACHI: It’s the year 2021 and for some reason Pakistani celebrities seemed to have missed the memo that they need to be careful with what they say. Over the past few days, a number of celebrities have landed themselves in trouble with their problematic statements. From Hira Mani making absurd declarations of love in an interview to the Subzwaris ill-informed take on feminism, to Faryal Mehmood justifying her comments around body-shaming, here are celebrity statements we want an explanation for.

1. Hira Mani and her declarations of love

It wasn’t long ago when Hira Mani infamously declared “mard bari pyaari cheez hai (men are very precious)” and went on to proudly declare that she stole Mani away from her friend. The interview didn’t sit well with a lot of people and for obvious reasons. To start off with, she was a complete snake and a terrible friend. Who betrays their friend like that? Then came her undying love for her husband, which would have been cute, if she didn’t constantly belittle herself to elevate his position in her life.

However, what Hira Mani did manage to do (sort of) was redeem herself in an interview with Urdu News  by reassuring fans that despite the betrayal she is still on good terms with the said friend. One would expect the story to end there and for the interview to be laid to rest. Unfortunately, Hira Mani doesn’t know when to stop talking and in doing so she went on to make a terrible declaration of love for her husband. This time she went on to say that she would still somehow find a way to marry Mani even if he was married.

Does Hira Mani not understand the concept of betrayal and deceit? Is she oblivious to the fact that being the other woman, even in a hypothetical situation, isn’t wholesome and won’t still well with fans? Will she ever stop making such problematic statements?

Now don’t get us wrong, we adore Meera Ji, we really do. But if we’re being honest,  her recent blunder has left us a bit dumbfounded. In her most recent goof ups, Meera Ji was eager to offer her warmest regards to our Olympic athlete Arshad Nadeem who managed to rank fifth in the Olympics javelin throw.

She took the opportunity to commend Arshad Nadeem on how well he performed and talked about how he bought pride to Pakistan’s name. She also went on to urge the government to take active interest in acknowledging the efforts made by performers. All that is great, but we’re not sure which Olympic games the actor was watching because she’s under the impression that Arshad Nadeem is a cricketer. One might give her the benefit of doubt and assume it was a slip of tongue, but no. As the interview draws to an end she brings up cricket once again.

A post shared by Life of a Brownie (@brownlife00)

Oh Meera Ji, what are we going to do with you?

3. Sadaf Kanwal and her ‘culture’

If you don’t get the reference to this statement, you’re probably living under a rock. But in any case, we’ll revisit the curious case of Sadaf Kanwal’s culture.

The interview was a train wreck from start to end. The model said a lot of questionable things in the interview, ranging from how women are not bechaaris (poor souls), how she as a wife has to pick up her husband’s shoes and iron his clothes (disclaimer: she doesn’t iron them). Up until this point viewers took the interview as a bitter pill to swallow.

But then came the most damning statement. Kanwal went on to say she needs to know her husbands likes and dislikes because “I am his wife and I am a woman. He doesn’t have to know the same about me.” That’s when it all came tumbling down for the model-actor.

People, us included, wanted to know if the model even knew what culture meant. Some wondered about why she even brought ironing up if she doesn’t do the ironing and if that makes her a bad wife. Others questioned if Sherry (Shehroz Subzwari) needed a wife or a house help? And most importantly, everyone wondered where did Sherry’s shoes disappear.

Now when the world is on your case, the most prudent thing would be to lay low for a while and wait for the next celebrity scandal to erupt and overshadow your blunders. But dearest Sherry had other plans. He decided the best course of action would be to dig an even deeper hole for himself and here’s how he did it.

In an interview with a fellow actor, Salma Zafar Asim schooled Shehroz Subzwari on why his wife’s statements were problematic, especially considering how terrible the past month had been for women with the severity of crimes committed against them.

Sherry acknowledged that feminism is all about giving the oppressed gender the ability to speak for themselves but in the very next sentence he went on to say that feminism is being used as a smokescreen to allow women to be shameless. We would really like to know who introduced this version of feminism to Sherry and have a conversation with that person. Also, Sherry where was your shame when you were posting shirtless pictures of yourself jogging in the streets?

5. Faryal Mehmood and her unapologetic body-shaming

It’s 2021 and we’re finally at this place where we’ve stopped discussing a woman’s body shape and size. That is unless you’re Faryal Mehmood. Faryal Mehmood decided she was entitled to body shame a fellow actor. Not once, but twice. She did this for the second time on Time Out with Ahsan Khan even though she knew the actor in question had taken offense to her statement.

Faryal Mehmood explained she had joked on a show that Hareem Farooq wouldn’t be able to fit in a space because of her weight and Hareem Farooq was not entertained by the casual body shaming. Rather than apologizing, Mehmood decided to pick at the wound and defended her statement saying, “It was a joke. Why would I make fun of anyone? I used to not be able to fit anywhere. There was nothing to take so personally. Just lose some weight, it’s not that hard.”  She also went on to add, “I know what body-shaming does. It is bad, but if ex-fat people crack a joke, it’s not a big deal. Chill out.”

No Faryal. That’s not how body shaming works. You can’t continue the cycle of shaming when you should be the biggest anti-body shaming advocate since you’ve been through it. And what’s ironic is that Faryal Mehmood went on to call out Sonya Hussyn for body-shaming her! Pot meet kettle.