A clip of the actor receiving the vaccine with Tariq Cheema's family members is making rounds on social media, while the accused claim that it was only a trial shot 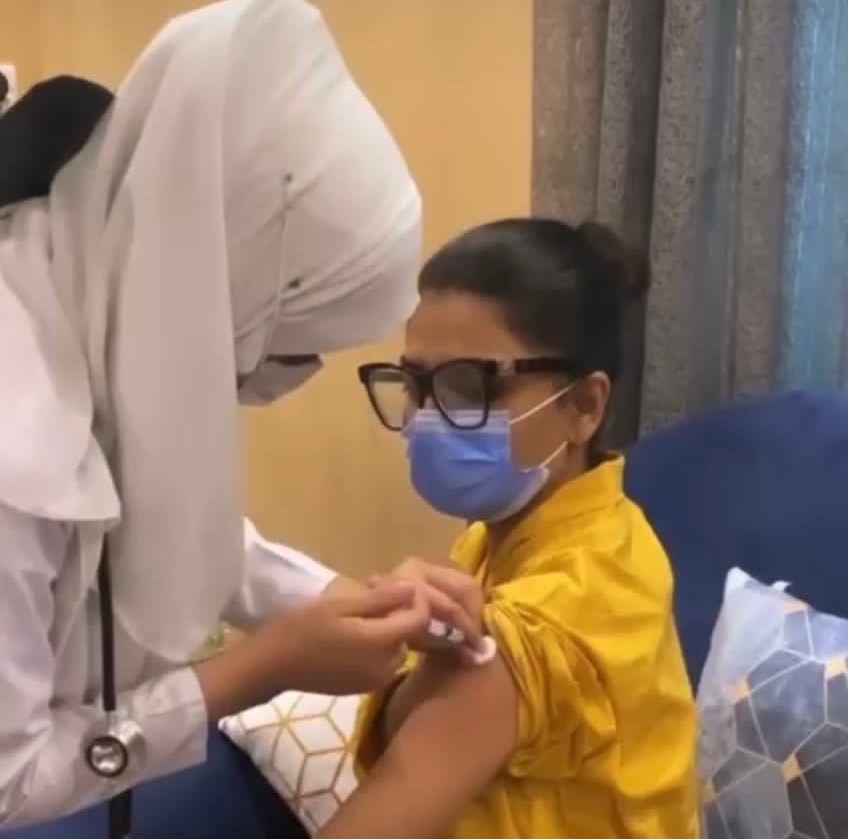 KARACHI: As Pakistan enters the third wave of COVID-19, some percentage of the population has also been receiving the vaccine for the virus. With healthcare workers given priority for the vaccine, adults over the age of 60 years have also made it to the list. However, Federal Minister Tariq Bashir Cheema and actor Iffat Omar clearly do not fit under any of these categories. Yet, a clip of the two along with a few other family members of Cheema receiving the vaccine at a house recently made rounds on social media. Pakistanis were quick to notice that the individuals jumped the queue and got the vaccine out of turn. Their privilege was also called out for receiving the shot at the comfort of their home while Pakistan is yet to receive enough vaccines to cater to everyone in the country.

Not sure if that’s Iffat Omar – it’s all from the clip of Federal Minister Tariq Bashir Cheema (circled) supervising vaccinations for his family at home (of course out of turn)
The iffatomar tag shows up all of a sudden in the clip – it’s not there right before – no resemblance pic.twitter.com/qJBQQ48122

Tweet has been deleted but I expect an apology from Iffat Omar, Tariq Cheema & his family in the very least for using their privilege to jump queue for vaccines that maybe an elderly person with co morbids could've used. People above 60 are waiting for their turns @OmarIffat https://t.co/P0ISgwwEo2 pic.twitter.com/eWTSXAWU0o

Soon after, Tariq Bashir Cheema and Iffat Omar stated that the vaccine was in fact a trial sent by the University of Health Sciences. Apparently, the same team had visited their house earlier for the first shot of the trial booster and no political influence or privilege had been exploited on the occasion. However, Twitter still does not seem convinced.

Some users even came at the actor with facts regarding the trial vaccine and how it is supposed to work.

Cansino is a single shot vaccine. Trials are conducted at hospitals, it's a double blind study. You don't get to know if you're being given the vaccine or placebo in a trial. I'd say accept that you've jumped queue and apologise.

Iffat Omar’s behaviour is the reason Meera hides her age

Iffat Omar has also been called out for her hypocrisy since she has spoken against an inefficient legal system and government earlier but has now allegedly broken the law herself.

Meet Iffat Omar. She talks about rule of law, honesty and what not and was the first one to jump queue and get herself vaccinated! pic.twitter.com/SSKFk4vvVe pic.twitter.com/xJqUhlrjDf

Tum kro to style, hum kry to gunnah
The double standard of this damn shit system for the powerful mafia.
Usually, in the way Iffat Omar gives lectures on her YouTube channel it seems like she is the most honest & loyal but in reality, she is lol.#COVID19 #Covid_19 https://t.co/LNr9EZI8bY

Twitter has also been pointing out the risk that those getting the vaccine out of turn are posing to the ones who are eligible to get it at the moment.

Not sure if that’s Iffat Omar – it’s all from the clip of Federal Minister Tariq Bashir Cheema (circled) supervising vaccinations for his family at home (of course out of turn)
The iffatomar tag shows up all of a sudden in the clip – it’s not there right before – no resemblance pic.twitter.com/qJBQQ48122

I sincerely hope our "celebrities" speak about Iffat Omar queue jumping for her vaccine, while millions of vulnerable people continue to live in never-ending anxiety, waiting for their turn. If they really are "influencers", they should do the right thing and speak up.

Good advice. And don’t jump the queue on vaccination if you are under age https://t.co/ASKpbanNso