Comment: Meghan and Harry’s interview – the irony is lost on desis

Etched with colorism and racism, the subcontinent's shock towards Meghan's discrimination by the royals is surprising 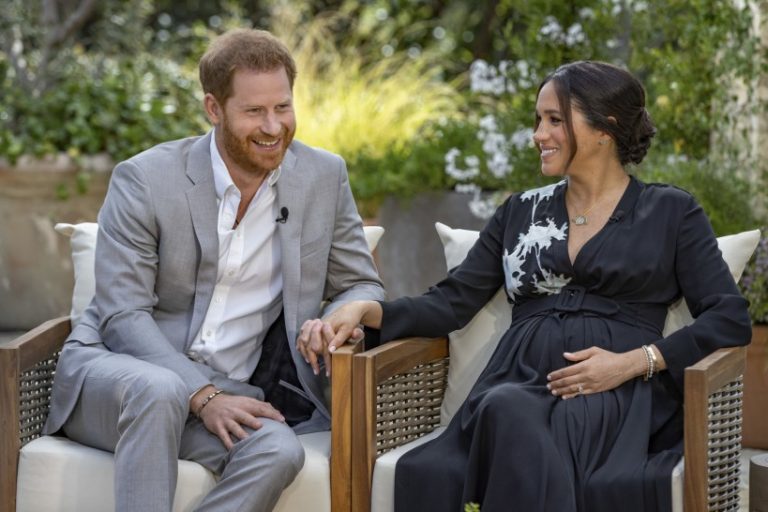 KARACHI: In recent news, Duke and Duchess of Sussex – Prince Harry and Meghan Markle, sat down for an interview with Oprah Winfrey where some of the most explosive revelations about the royal family sprung up. A few of these revelations included Markle talking about how a discussion was made about her child Archie’s skin color (before his birth) with Harry by a member of the royal family. The comment showed fear towards the child-to-be turning out to not be ‘up to the mark’ with his ‘whiteness’ for the royal family, considering Meghan is half black.

“There were conversations about how dark his skin might be when he is born,” reveals Meghan during the interview, to which Oprah exclaims and seeks further confirmation by asking. “There is a conversation with you, about how dark your baby is going be?” “With Harry,” Meghan replied. “Potentially. And what that would mean and look like.” Aside from this, the racism and colorism Meghan faced were conveniently brushed aside by the family and Markle was gaslit for her trauma. When trying to seek help for her suicidal tendencies, Meghan was denied help too.

With an immense amount of outrage and surprise following the revelation, should it really come as a surprise for people within the subcontinent? Have we not had our own fair share of discrimination over skin colors? Do we not look for fair-skinned women as bahus for our sons at the time of marriage? Do we not prefer women associated with our own blood-lines and align marriages with our generational obsession with khandaan mein shadi?

It is time we stopped with our collective shock at the incident and addressed the ironies that have attached themselves to us. Here are some of the things that are highly prevalent in desi households, that otherwise become alarming aspects if seen amongst white families.

Gaslighting is a tactic in which a person or entity, in order to gain more power, makes their victim doubt their own sanity. One of the most frequent tactics of gaslighting can be downplaying the victim’s condition, blaming them for what they go through, or telling them to simply ‘deal with it’.

A common translation of gaslighting and perhaps the most frequent within our society is victim-blaming, where a victim is made to question their own reality by a collective denial offered by anyone who hears about the incident. Refusing the event has taken place, society’s collective efforts are towards ensuring the survivors end up denying it too. This is a general case for survivors of mental health issues, particularly depression, and suicidal tendencies where patients are either told to ‘stop being sad’ or to strengthen their faith.

Nearly every woman beyond her twenties has faced the extremely toxic rishta culture that thrives on insecurities, body-shaming, women’s slavery, and internalized misogyny. Here women are presented as livestock for butchering. Their bodies, skin colors are analyzed. So are their family history and bloodline. It is easy to criticize the royal family for trying to keep their ‘bloodline pure’, but we often tend to forget the fixation our own people have with marriages within the families. A number of our television dramas keep glorifying cousin marriages and vilify marriages to someone outside one’s caste, family, and religion. It is for this very reason that we have become extremely paranoid to change and the word ‘foreign’ is thoroughly used to alienate a certain idea, person, or entity. Like Britain’s monarchy, our own society runs on some of the most archaic notions not followed elsewhere.

In Pakistani society, some very widely discussed phenomena are sectarianism and casteism. However, racism still lurks in the dark as our fashion campaigns are often guilty of using black people in the backdrops, holding umbrellas to our models. In all these campaigns, one can clearly feel a sense of superiority on the basis of skin color and racial identity. People with darker skin (mostly black people) are projected as backdrops or props. The focus of the photos is always the models, embellished and styled as primary subjects, having a lighter skintone.

While we do let out a collective gasp at Meghan and Harry talking about white supremacist elements within the royal family during their interview with Oprah, we must take a look at ourselves and the way we place superiority on the basis of ‘whiteness’. As we use black, African people as backdrops and then waste our energies in a futile attempt to justify our internalized racism, the same energies can be spent on hiring black models within our own culture. The Sheedi and Makrani communities of Balochistan barely ever have any representation within our fashion or media industry. Think of a single actress or model from the aforementioned communities to understand our subtle, yet very-much-there racism as a society.

In their interview with Oprah, Meghan and Harry talk about becoming victims of bullying by UK’s tabloid magazines. This should hardly be strange for people where extremely opinionated and suggestive questioning is directed at some of the most vulnerable respondents. Those responses are further contextualized and manipulated through editing to fit a certain ‘agenda’.

On the other hand, our expertise lies in perhaps something that classifies as the most dangerous mentality across the globe. Like herds of sheep, we follow. Without question, without research. The audiences within the country are extremely polarised and are extremely driven on bullying someone who appears to be, or is different. Most of the time, this different, unshielded person is a woman. The Aurat March bashing is justified by the radical changes it seeks within the society. Its supposedly ‘foreign’ elements are reason enough to justify our hate towards women and our misogynistic actions that follow. It is not difficult for us to single people out and cyberbully them throughout social media – particularly women either in an extremely vulnerable position or seeking justice.

A post shared by The Duke and Duchess of Sussex (@sussexroyal)

It is no surprise that we see Kate more glorified than Meghan. Kate took a dupatta when she came over to Pakistan. She feels less foreign. She embodies what we seek. Fair skin and colored eyes. This fuels our colonial hangover and puts the ‘whiter’ couple on a pedestal higher than the one it already was on. Media is already occupied pitting both daughters-in-law against one another. Meghan translates to everything we refuse to see in women: a divorcee, dark-skinned, openly feminist, and an actress with a rather ‘questionable’ choice of roles according to most desis.