Featuring Asma Nabeel, the campaign urges women to look beyond societal taboos associated with breasts when it comes to something as alarming as breast cancer 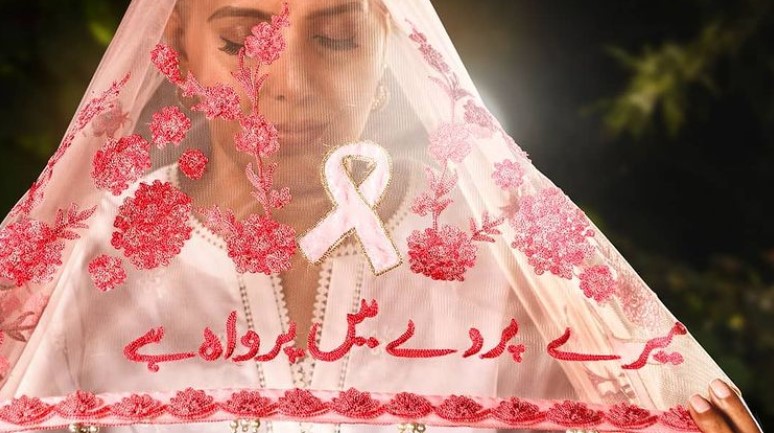 KARACHI: Not long ago, Quaid-e-Azam mausoleum was lit in purple to mark PINKtober. Social media filled with offensive comments and statuses because the word ‘breast’ has been sexualized over the years to the extent that women feel ashamed to seek healthcare if issues spark up within ‘that’ part of the body. Recently Ali Xeeshan, a designer who often uses his platform to highlight women’s issues, incorporated a message highlighting the importance of breast cancer awareness in his campaign, ‘Parday Mein Parwah’.

The campaign urges women to look beyond societal taboos associated with breasts when it comes to something as alarming as breast cancer.

“1 in every 9 women in Pakistan suffers from breast cancer and almost half of them die, every year. The major cause being their hesitation to check themselves that can prevent the disease at an early stage. Ali Xeeshan collaborated with the pink warrior; Asma Nabeel and brought to life a dupatta that reminds you to check yourselves while safeguarding your modesty. Kyon ke ab #PardayMeinParwah zaroori hai. 🌸” The video highlights that every year about 85000 cases of breast cancer are reported in Pakistan, with almost half of these patients succumbing to cancer and dying. Making it a highly prevalent ailment amongst women. “In order to protect a woman’s modesty, any talk about the illness is kept under wraps.”

The video features Asma Nabeel, who has come up with the words sewn to the dupatta. Nabeel is herself going through chemotherapy at the moment and fighting breast cancer. The shoot has been a joint collaboration between Hot Water Bottle Films and Visual Prophecy while Beenish Pervez has served as the stylist for the shoot.

Ali Xeeshan had recently launched another one of his designer collections – Numaish, through which he made a statement against the patriarchal notion of Jahez Khori (dowry seeking) which is a norm in desi weddings.