Public spaces are increasingly becoming digital, and we must moderate them responsibly 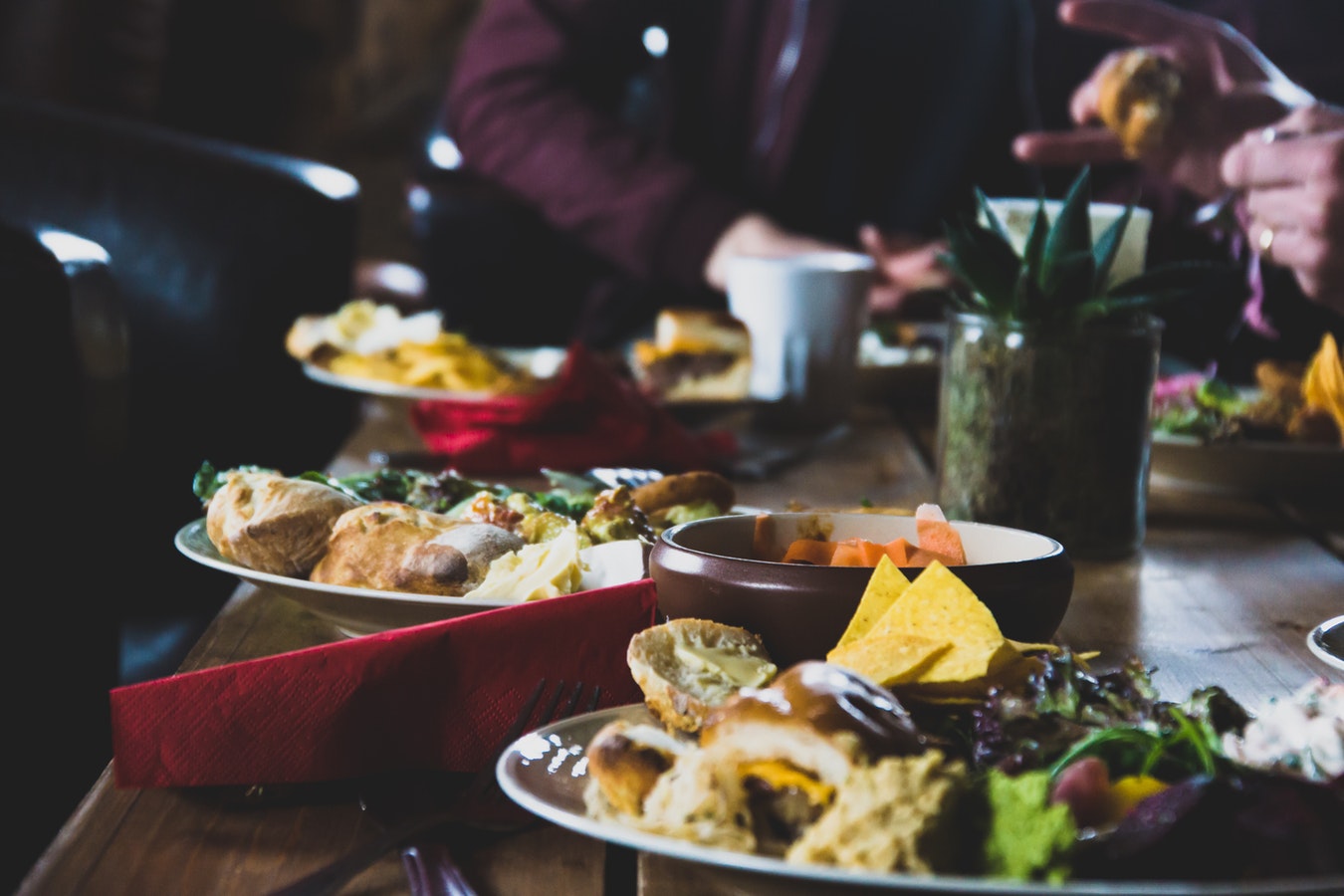 KARACHI: Karachi has a bustling food scene and with new restaurants popping up around the city, discourse related to small food businesses has become important. Six years ago, an interesting digital space emerged on Facebook, called ‘Karachi Food Diary’. The rules governing the Facebook group were simple and based on the basic tenets and ideals of rules applying to all shared and public spaces: be respectful, and don’t take up too much space.

The Facebook group filled an important vacuum in the food market as members began to share reviews of new eateries and home-based entrepreneurs began to market their products. The group helped build a general atmosphere of accountability: bad service resulted in bad reviews – this not only helped consumers make informed decisions, it also gave business owners an opportunity to understand their market. One could go as far as to argue that Karachi Food Diary, currently at almost 27,000 members, helps increase efficiency within the restaurant market by giving business owners and consumers a space for interaction and engagement. However, recently, it has also become a space that promotes and protects sexism, elitism and general hypocrisy.

Read: When hyper-masculinity and hyper-nationalism meet

Recently, a video made by Dawn on three female chefs working at restaurants across Karachi was shared on the group. Certain members began to very distastefully criticise the women in the video – while their larger concern had to do with a problem of representation in the video, their comments came off as highly sexist and misogynistic and gave cause for concern. When women in the group began to engage with the sexist attitude by breaking down why it was dangerous, a male member responded by saying that he couldn’t argue with those women because they would just “cry rape”. His comment created an outcry, as he went on to threaten: “There is physical rape, but mental rape is far worse”. 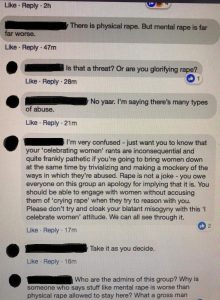 Feminists on the group went on to engage with the moderator – they wanted the perpetrator to be removed from the group, or to be made to issue a public apology at the very least. However, the moderator claimed that KFD is a food group, and not a space for discourse regarding ‘social issues’. He deleted the entire conversation and did not remove the man who was making comments that supported sexual violence against women from the group. 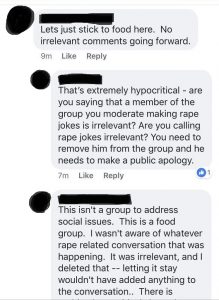 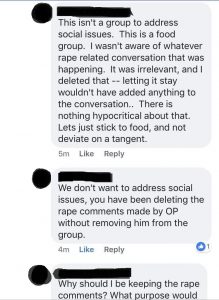 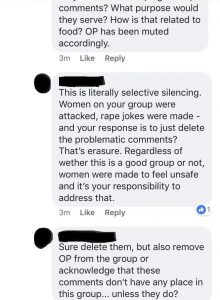 Rape jokes and rape threats make us uncomfortable, but suppressing and erasing conversations on the issue is not the solution. It is a political act; an example of selective silencing that only benefits the perpetrators of that mindset. A refusal to talk about the problem or hold its perpetrators accountable is only going to make the problem worse.

The toxicity of the discourse against women on the group is not just limited to rape jokes. Recently, a male member joked to another male member: “You sound like a woman who hasn’t received her pocket money”. Such comments are a common feature in conversation threads on the group. The comments are representative of the misogyny that inhabits our mindsets, and our refusal to engage with them is indicative of our inability as a society to address or acknowledge how dangerous the attitudes perpetuated by those comments are for the women we are surrounded by. 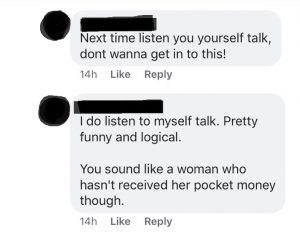 A big part of the problem lies in our fear to have conversations about ‘social issues’. It is important to recognise that the group is a ‘social space’ – social issues exist in spaces where social engagement exists, and they cannot be avoided. Recent debates on the ethics of tipping: whether tipping should be perceived as a form of charity or compensation for a service, or on alcohol consumption in certain restaurants, or the hike in food prices at restaurants due to Rupee depreciation are indicative of the fact that conversations about social and political issues are unavoidable. We are a city of food lovers; food binds us in a way that is unavoidably ‘social’.

It is also important to recognise that we live in a time where public spaces and spaces for public discourse are increasingly becoming digital. We must moderate them responsibly. Karachi Food Diary is an example of the dangers of arbitrary moderation – ‘moderation’ can very easily become ‘selective silencing’, and learning to navigate that fine line is an important lesson for us all.