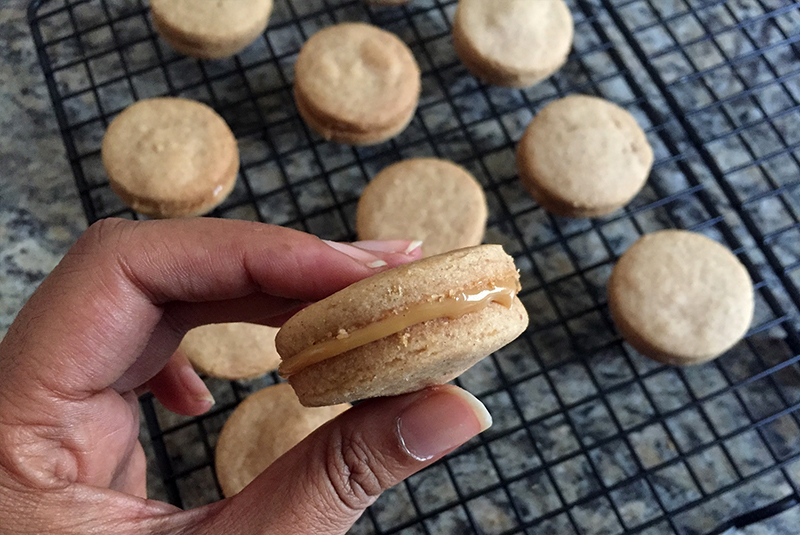 “Okay, if you could move anywhere in the world right now, where would you go?” Farah wriggled herself into the heap of pillows strewn on the ground, getting herself as comfortable as possible.  Looking up expectantly, she moved her eyebrows up and down, coaxing an answer out of Fiza. She loved asking these types of questions.  The what ifs that would enable us to dream outside our mundane day to day existence.

“Easy, I would go to Lima.”  Pulling herself up, Fiza stretched her hand to grab some chips that were just below her.

“Lima! Why would you choose Lima over a city like New York City or London?” Farah protested the selection, putting her answers as the ultimate.

“Oh please, those are so typical.  Besides, Peru is special.  Since the mid-1990’s food has become a religion there.  It’s very exciting.”

Rolling her eyes, Farah drawled, “You and your food obsession.  What’s the difference anyways. Everyone loves eating in Pakistan as well; we all think our khaana is the best.  Just think of all those people we know who go abroad and refuse to try anything other than desi food.  Or people bickering over which biryani place is the place to go.”

Fiza rolled her eyes dramatically in front of Farah’s face, “Not the same, not the same at all.  Let me paint you a picture of Peru, you little ignorant twig!” Making a ridiculous face, they both burst into laughter.

“Okay, you big bountiful branch, paint me this picture, but first pass some of those delicious cookies you brought.”

“Well look who is crawling for the delicious cookies.  Little did you know that they have dulce de leche in them, which, is prominent all over South America, and where Peru is!” At this point, Fiza was just crazed with excitement.

“Can you sit your big butt down and relax,” Farah started putting on a high pitched voice, “little did you know, dulce de leche, blah blah blah.”  Going back to her normal voice, “Don’t make me regret letting you go off on one of your foodie tangents.  We all know where Peru is and we all love dulce de leche, so now give me some new information.” She took a bite of the cookie and groaned happily, pointing at the cookie and giving a thumbs up.

Fiza started waving her hands in front of her body and making “ooo-ing” noises, “Let’s go back in tiiiiiime, back to the mid-1990’s when this all began.”

“Imagine a city, straight after a civil war, with blackouts and…”

Farah erupted in giggles, “What are we talking about Karachi or Lima here!” After seeing the dagger’s Fiza was throwing at her, she put her hands up, “Heh, sorry, sorry, continue! I promise I won’t interrupt.”

Closing her eyes and resetting, Fiza started again, “Imagine a city, slowly rebuilding itself from years of violence, unrest and uncertainty.  A city you couldn’t imagine becoming a world class culinary destination, that just a few years before had no restaurant in sight and darkness in the streets.  Everyone ate huddled at home, except, there were a few who dared to sell food on the streets during the war alongside some fearless customers.  With few customers and a daring outlook, this is when it all began.”

“The famous restaurant, Astrid y Gaston, was one of the starting points to truly putting Peruvian cuisine on the map.  A young couple began their dream by opening up a small restaurant, Astrid who was German and Gaston the Peruvian.  Trained in the French culinary style, they put their skills to use with a French menu.  Over time, their outlook evolved; they saw all the homegrown ingredients that were available, but simply not being used.  Gaston wanted to help build a thriving economy, and provide opportunities for those in Peru to find work.  He initiated a great change.”

“The menu developed further and they began serving Peruvian food in the French manner. Simply put, they began to elevate the cuisine. What started as a small restaurant has now become one of the Top 50 restaurants in the world through absolute dedication and devotion, bringing fame not only to themselves but also the country.”

“Gaston Acurio became an ambassador for Peruvian cuisine worldwide.  Along with other brilliant chefs, dozens of successful restaurants have opened around the world to celebrate their cuisine, and showcase the vast ecosystem that makes up the country.”

“A stunning nation with, I believe, 84 different ecological zones.  Starting down by the Pacific Ocean, and climbing all the way to the top of the Andes.  The lowest point in the country is some -100 feet, while the highest reaches over 20,000 feet.  The Amazon, mountains, desert, and oceans all provide diverse and special products that enhance the flavor of each bite.”

“Now, while most visualise Peruvian food as simply ceviche, it actually is a great example of diversity, and fusion cooking.  For example, Nikkei represents the Japanese-Peruvian culinary sensation.  Peru has the second largest ethnic Japanese population in South America and they have made their mark well known with their beautifully and deliciously crafted dishes.  Making use of the plentiful seafood at their disposal, they combine the light, delicate flavors of Japan, with a Peruvian twist.”

“One is astounded by the strides they have made over the last two decades, a country with no restaurants, to one with over 80,000, spreading their influence world wide, inspiring many chefs, journalists and tourists to fly great distances just for the food.”

“And that, my dear friend, is your foodie lecture for the night.  So, what do you say, let’s save up all our money and plan a trip?  Go explore the Amazon, walk the Inca trail and eat all the food?”

Polishing off the last of the cookies, Farah replied “I’m in, but given our measly salaries we may need to work another decade before we save enough.”

Reading each other’s mind, they both said, “Worth it!” at exactly the same time.

Alfajores is a cookie found all over South America, as well as variations of it across the world.  Traditionally two round cookies with a sweet filling, most typically filled with dulce de leche, they can be covered with icing sugar or coconut (and sometimes even chocolate).  I love these cookies at their most traditional, but I was also inspired by the fusion cooking that takes place in Peru.  As such, I combined Pakistan with Peru, and came up with Masala Chai Alfajores.  Essentially masala chai flavoured cookies with a sweet inside.  If you love dulce de leche as much as I do (which is a lot), then I hope you’ll enjoy these as well.

1 can of condensed milk

1. Making the dulce de leche takes time, but it is the easiest part in this recipe. Take 1 can of condensed milk, and remove the label. Place the can in a tall pot, and pour water inside so that it covers the entire can by an inch or two. Get the water to a boil, then put the heat down to a simmer. Simmer for 3 hours. You will need to keep your eye on this to make sure that there is always an inch or two of water above the can. Every so often, add some more water to the pan to ensure this. After three hours, remove the pot from the heat and leave the can in the water until it cools down. After some time, you can open up the can and the condensed milk should have turned into a dark caramel, with a thick texture.

2. While that’s going, start the cookies! Turn your oven on 175 Celsius and cream the butter and sugar until it is light and fluffy.  Once done, add in the vanilla extract and mix quickly. 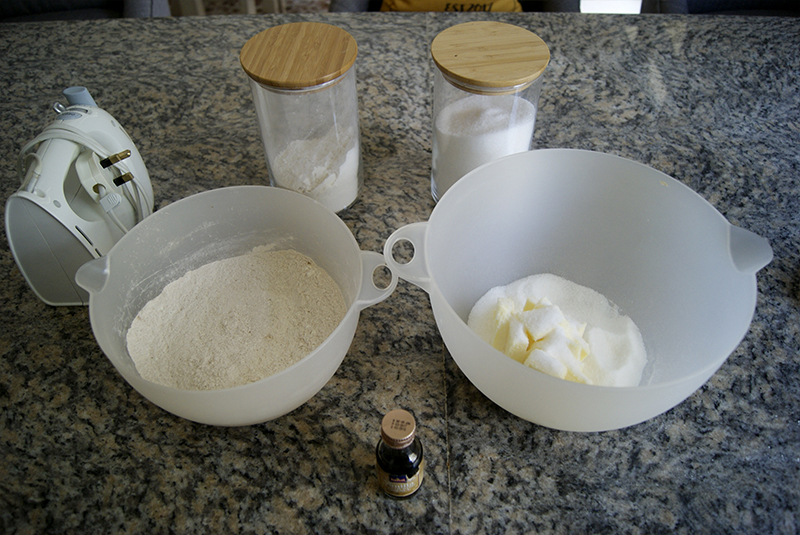 3. In a separate bowl, make the flour mixture.  Combine the flour with the salt and spices and whisk lightly. 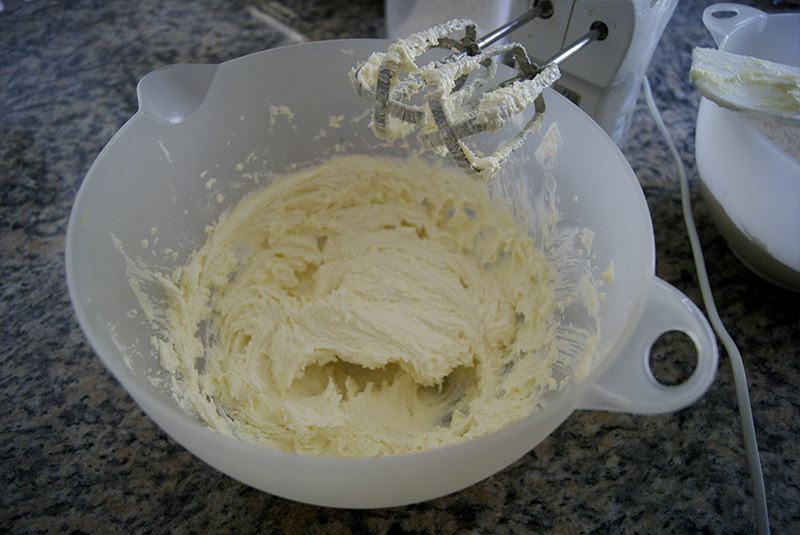 4. Add the flour mixture to the butter/sugar combo and mix together until you get a nice soft dough.  Add the flour in two or three parts to ensure that the flour doesn’t go flying everywhere once you turn the mixer on. 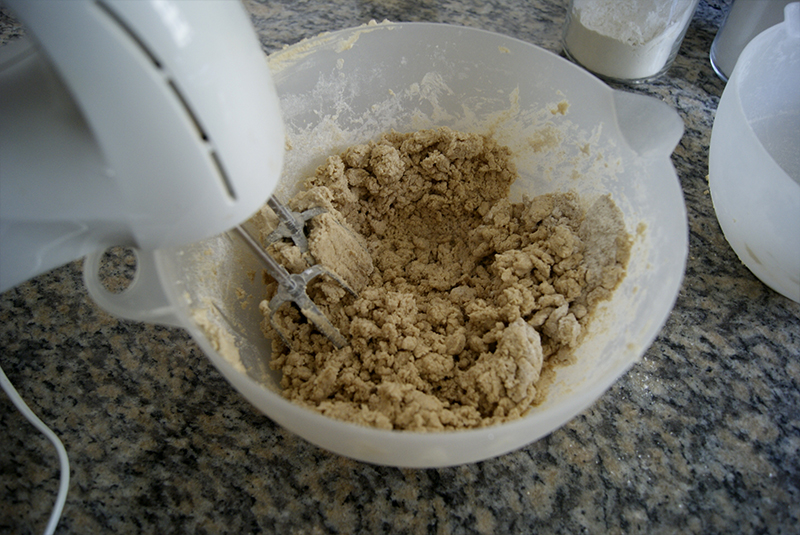 5. If the dough doesn’t come together in the bowl, turn over on your counter and work it into a ball with your hands.  Wrap with cling wrap and put in the fridge for at least 30 minutes. 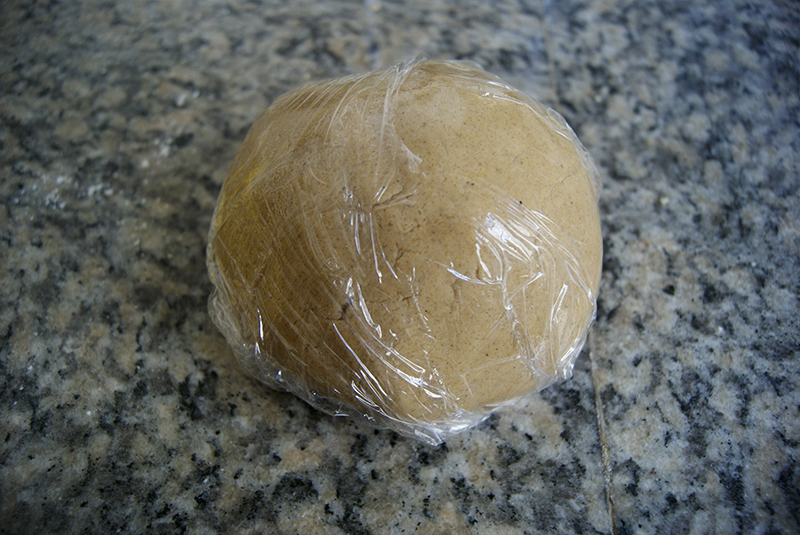 6. After it has chilled, take the dough out, cut in half (putting the other half back in the fridge or even the freezer if you don’t want to make that many), and roll out the dough onto a parchment paper.  This just makes it easier as you can transfer the whole of the parchment paper with the cut out cookies onto your baking tray.  You may need to flour the rolling pin slightly, and as you roll the dough, don’t be worried if some sticks to the rolling pin.  It’s easy to just stick it back on and pat it down.  Roll the dough out, and then taking a two-inch cookie cutter (or anything circular), start cutting out the dough.  You should get around 26-28 cookies for the one half. Remove excess dough and place in the oven for 12 minutes. 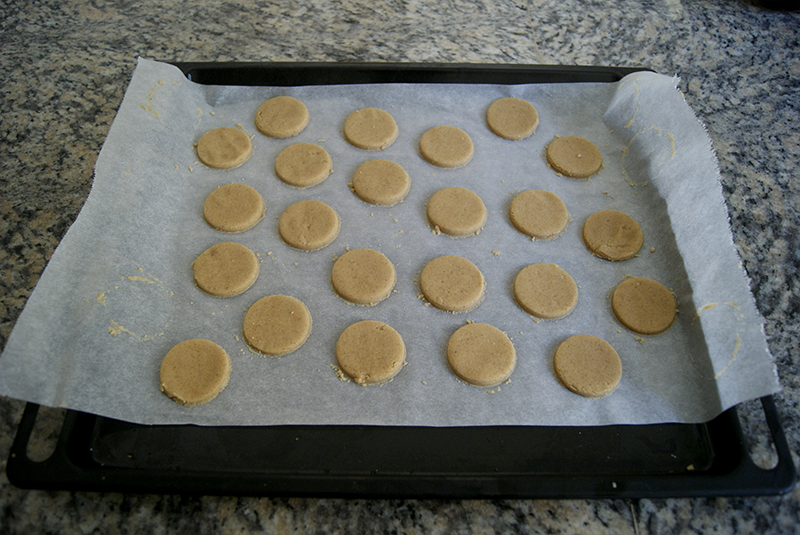 7. While the first batch is in the oven, roll out the second half of the dough

8. After 12 minutes, the cookies will have gotten very slightly darker.  Wait a few minutes and then place on a cooling rack. 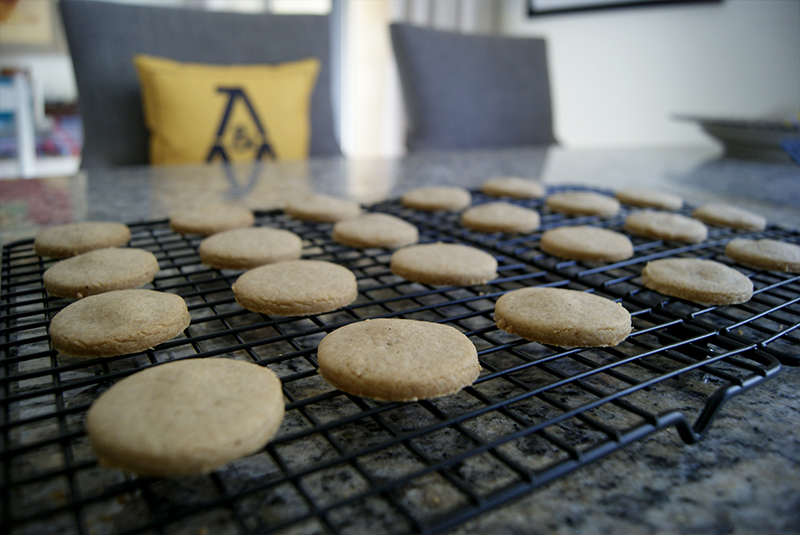 9. Once the cookies have sufficiently cooled down, it’s time to assemble the alfajores. 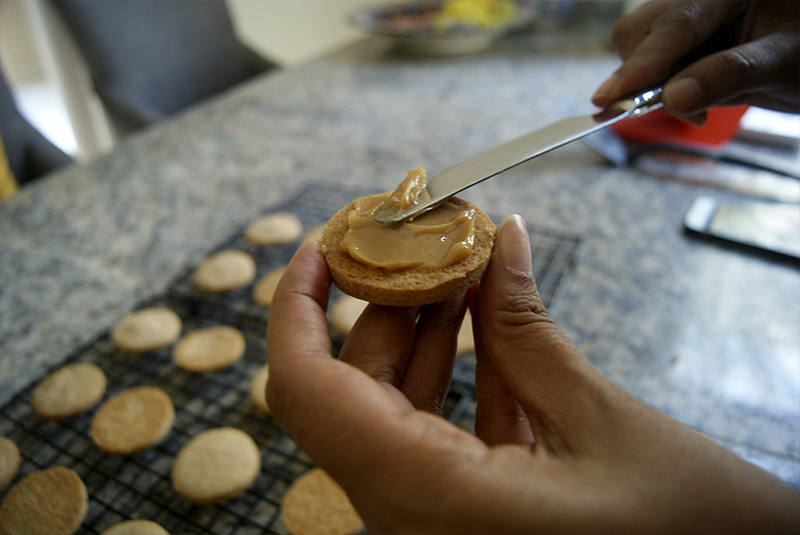 10. On one side of the cookie, place a little dollop of dulce de leche, and using a knife, spread it across the whole cookie.  Take another cookie and place on top.  Continue the process until all the cookies have been matched. 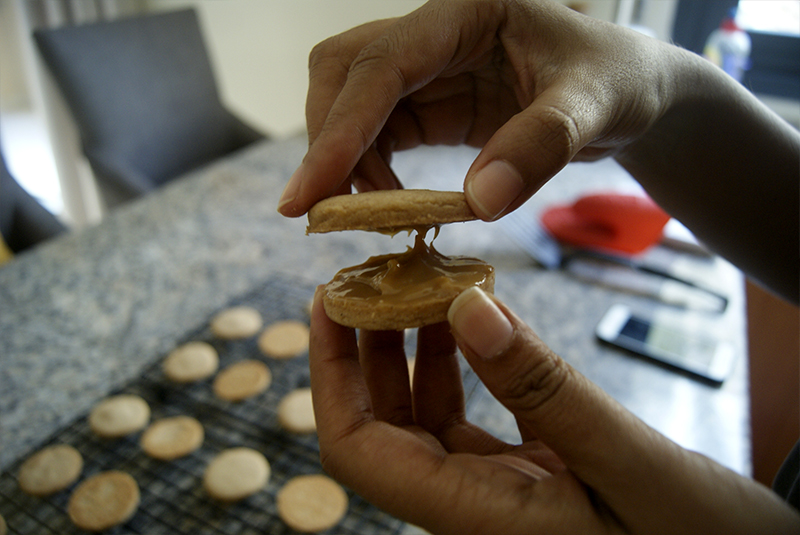 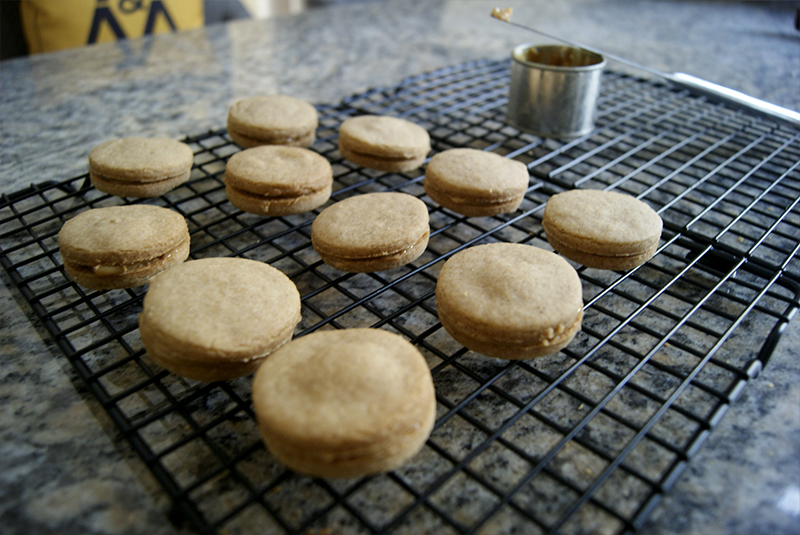 This story is part of a special Ramazan series, which is updated weekly throughout the month. Stay tuned for more stories and recipes.

The Competition: Scallion and Coriander Pancakes