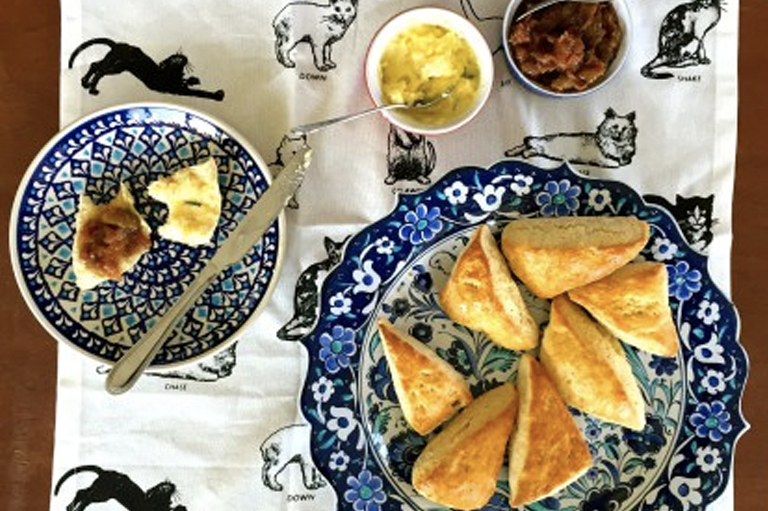 Her eyes quickly opened, instinctively knowing it was 7:30 am, despite the fact the curtains were pulled down, blocking any sunlight. The clanging noise began, her own personal alarm clock that she never had to set. The cause was unknown, yet directly on the other side of the wall. No window to peer out, she would either have to run outside when the sound started or wait by the entrance to the apartment building to find out. Knowing it occurred every morning, she promised herself she would run outside tomorrow to find out. But that would never happen, she made this promise every morning.

Never the type of person who slept in, the noise didn’t bother her as much as her husband. Most of the time he would sleep through it, but when it woke him, he would complain, “What is that? A hammer banging on the railing?” It sounded just like that.

She lay in bed for a few more moments.  Day 130 of unemployed life. The first three months were great; now it was sliding into depressing.  Did it help that she couldn’t sleep in? At least she wasn’t waking up at 2 pm every day. Not that getting up early meant she was being productive. It was easy to imagine the possibilities of what she could achieve before sleeping. Not so easy to muster up the energy to achieve anything the next day.

The “what ifs” of employment kept holding her back. What if I get a call for an interview today, what if I get a job next week? If only she could shake this off and actually start working on her many planned projects.

Did she completely lack the ambitious gene in her DNA? Day in and day out, she wondered how the hell people started their own businesses, or even something so basic as planting a garden. Not even a garden, just one plant. She felt so tired every day. Doing one errand a day, a 30-minute workout and sitting on the couch was exhausting. Just go outside for a walk, start with that. But she never moved when she could.

It wasn’t depression. She still had a very healthy appetite, and her fun spirit around her husband, family and friends. She just finished a book on a woman with depression, fictional, but true to how a person would feel. At times it felt relatable, but not the same. This was different. She was reading, socialising, thinking, just not doing anything. Or what she thought was doing something. A job, that was doing something. Everyone had a job, she grew up thinking she would always have a job, and she did. Until she didn’t.

In a perfect world, she could get paid to cook the way she did, but she knew that wasn’t possible

She hated meeting new people these days. One of the first questions always hovered around what one did for work. As if this was our main defining point. She also disliked talking to some friends who would inevitability ask how the job search was. Well meaning question, but a fundamentally upsetting conversation to have time and time again.

Truth be told, she knew what wasn’t trying as best as she could. Hustling to get that next job. She did that the first time she was unemployed and 99% of her efforts went bust. She was telling people she was enjoying her free time. She knew once she worked she would miss it. Everyone dreamed of having free time.  It would just be nice to know when the free time was over. She swore the free time would be used productively, but it wasn’t. Sure, spending hours over a puzzle was fun, and perhaps a little bit of a mental challenge, but it wasn’t what she should be doing.

She should be volunteering for charities, networking, going for long runs and meditating! Okay, not meditating, she wasn’t that type, but doing something positive for her soul. At least that was the perception she wanted to give people. She wanted to shout out, “I’m doing great! I’m being selfless and productive all at the same time.” But, it would always be the same thing – I’ll do it tomorrow.

She knew what she was interested in, she did it every day and it was what she looked forward to the most. It was creating food that brought a peace that settled over her mind and made her forget about everything else going on. No stress, no headaches, just ingredients and recipes. Testing different recipes, adjusting them to make them her own, seeing what she had around the pantry to make something off the cuff. This was her happiness.

It was something she was good at, not great, but it was a skill she never got tired of improving. She didn’t want to make it a job. She liked the ease of cooking at her own pace, for herself, her friends and family. In a perfect world, she could get paid to cook the way she did, but she knew that wasn’t possible.

She loved watching food related TV shows and documentaries. Hearing the stories of world famous chefs. It was incredible, the passion and obsession behind their work. The genius to create the flavours, and to tirelessly work on perfecting something as simple as bread or stock. This is what she could do as her project for fun. No pressure, just for fun. She started thinking about her favorite things to cook and bake; cookies, brownies, lasagna. She opened up the pantry and was instantly inspired. Something that was delightful for breakfast, and an afternoon snack. Even a midnight turn in the kitchen to solve any late night hunger pangs.

She already had a fantastically easy recipe, that was ripe for customizations and a nearly perfect recipe, just needed a tad bit of improvement to eliminate any uncertainties.

She started pulling out the ingredients from around the kitchen, took out her weighing scale and metaphorically rolled up her sleeves. It would be a good day after all.

This recipe really is a pick me upper. It’s relatively quick, taking 30 minutes from start to finish, making it one of my go to recipes. I’ll always have the ingredients around my kitchen, and you should as well. As such, they can be whipped up if you feel like a breakfast treat, or if you have guests coming over and want to impress them. Scones have a reputation of being decadent and difficult to make, when they really are not. Best when straight out of the oven, but heated up the next day in the oven or toaster for a few minutes and they are nearly as buttery and soft.

2. Combine the flour with the salt, and rub in the diced butter. It’s best to use your hands with this, and really rub in all the butter so after a few minutes it resembles breadcrumbs.

3. Then add in the sugar and slowly add in the milk, though not all at once*

4. As you mix it all together, you should get a nice soft dough, that should not be very sticky.*

5. Then on a floured surface, lightly knead the dough, and then roll out in a rectangular shape with the dough being between ¼ to ½ to an inch thick.

6. I like to cut them into 8 long triangles, or what could resemble the shape of a pizza slice. However, feel free to make circles or any other shape you may prefer!

7. Once done, place on parchment paper lining your tray and brush the top and side of each with the beaten egg.

8. Place in the oven for between 12-14 minutes. Remove when a nice light golden colour.

9. Resist the urge to eat immediately.

*In the end, I never use all of the milk. Which is why the recipe needs to be further perfected to get that perfect amount. Maybe it’s 145 ml of milk.

*If it is too sticky, no need to worry! Add a tad more flour to get that right consistency.

This story is part of a special Ramazan series, which is updated weekly throughout the month. You can read the previous entry here

The Competition: Scallion and Coriander Pancakes