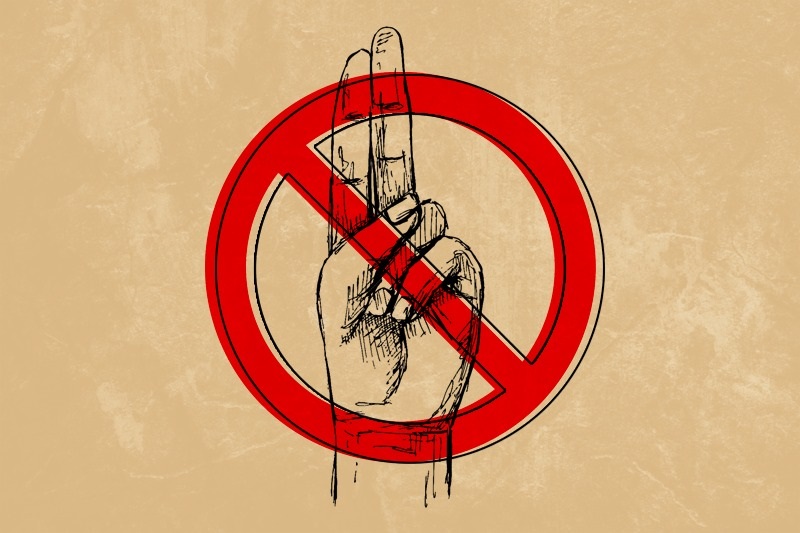 KARACHI: It seems the chants from Aurat March and anti-rape protests have borne fruit. For those who don’t know, rape survivors in Pakistan were required to go through a two-finger test to prove the crime had been committed. Rape itself is considered an unjustifiable, heinous crime, and in order to prove it, survivors had to go through virginity tests and be violated again. Apart from being invasive for an already suffering victim, the test would also prove inaccurate and obsolete in a number of cases. Despite being banned by the UN, it prevailed as a standard testing procedure for rape in Pakistan. However, after several protests and a petition, Justice Ayesha Malik of the Lahore High Court has passed a verdict that declares the two-finger test as well as the hymen test illegal and unconstitutional.

In a landmark judgement, Justice Ayesha Malik of LHC declared two finger test and hymen testing illegal. It is declared that the two finger test & the hymen test conducted for the purposes of obtaining the status of the victims virginity is a violation of her personal integrity👏🏾

A 30-pager verdict was issued which stated that the two-finger test was highly invasive, had no scientific or medical requirement, yet was still being carried out in the name of medical protocols in incidents of sexual violence. The “humiliating practice is used to cast suspicion on the victim, as opposed to focusing on the accused and the incident of sexual violence.”

What exactly is the two-finger virginity test?

The two-finger virginity test, also known as PV (Per Vaginal) is an intrusive physical examination of the vagina to study how loose or tight the muscles of the vagina are. In this test, the examiner puts two fingers inside the woman’s vagina and notes how “easily” the fingers penetrate in. The ease is directly proportional to the assumed past sexual experience. If the fingers slide easily it is assumed that she is sexually active from before the incident, however, if the hymen is still intact, it proves the survivor being a virgin.

Hence, the test does not take into account victims of rape who have had prior sexual experience and is both, exclusive only to women that are virgins, and primitive.

What the verdict says about this

The verdict states that the two-finger test and all other virginity tests are a strong violation of the dignity of a woman and are extremely disrespectful. “The conclusion drawn from these tests about a woman’s sexual history and character is a direct attack on her dignity and leads to adverse effects on the social and cultural standing of a victim,” it said.

It shifted the burden of proof onto the accused instead of the accuser by stating that such a case should investigate whether the accused raped or not, not if the survivor was raped or not. “If the victim is found to not be a virgin it cannot and does not suggest that she was not raped or sexually abused.”

“The victim’s sexual behavior is totally irrelevant as even the most promiscuous victim does not deserve to be raped, nor should the incident of sexual violence be decided on the basis of a virginity test,” the verdict strongly added.

The forces behind the change

Pakistan has been conducting virginity tests on rape survivors to check if they had sexual intercourse before they were sexually assaulted. According to such tests, a woman must be a virgin to be raped, said lawyer Maliha Zia Lari, one of the petitioners in the case. She also added that these tests violate a woman’s space and dignity.

The verdict said, “There is no law governing the requirements of virginity testing specifically the two-finger test and the hymen test. At the core of the respondents’ case, the justification is that these tests are carried out on the basis of established medical protocols in cases of rape and sexual abuse.”

For this issue, the petitioners took reliance upon Modi’s Textbook, a textbook of Medical Jurisprudence and Toxicology. The book is relied upon for medico-legal examination protocols. The 26th edition of the same textbook states: 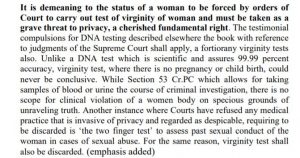 The verdict argues that it has “conclusively established that the so-called two-finger  ‘test’ has no scientific or medical basis.” They are an “extreme invasion of women’s privacy and bodily integrity as well as a source of re-traumatization.”

The petition says that there is “no place for these outdated practices under the Constitution.” It has also asked for the medical reports to discontinue phrases such as “habituated to sex”, “easy virtue” and “loose morals” while referring to women in medical reports.

The respondents argued that a consent form is sought from the survivor. The petitioners then retaliated by stating that the form itself provides extremely limited information about the test to the examinee. 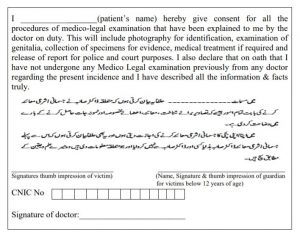 “This consent form does not explain why the two-finger test or hymen test is required or what its purpose is. On the contrary, it misleads the victim into thinking that she will be examined to collect evidence of the incident of rape or sexual abuse and not evidence with respect to her sexual history or promiscuity.”

“Change can only be brought about when the people responsible for the change understand and acknowledge the reasons for changing old practices which no longer find any justification. Merely documenting change and not implementing change does not mean that the Federation or the Provincial Government have acted in accordance with the Constitution, the law, and international obligations. Hence a concerted effort must be made so as to ensure that virginity tests are stopped in totality,” the verdict concluded.