Everything you need to know about the so-called ‘virginity test’ 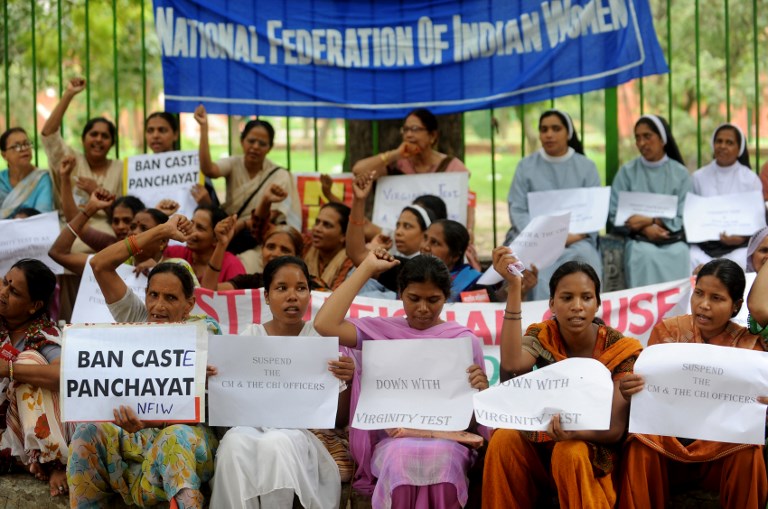 Protests against virginity testing in Delhi in 2009. PHOTO: AFP

KARACHI: A state in India has declared virginity testing a punishable offence which will be considered sexual harassment. The practice is rampant in some communities where newly-wed or brides-to-be have to prove their virginity before getting married.

In case you’re not exactly sure what virginity tests are, here are a few basics:

What is virginity testing?

Virginity testing is a practice to determine whether a person has had sexual intercourse or not.

Who is subjected to it?

Mostly girls and women. The invasive procedure can only be done on women.

Read: UN calls for a global ban on ‘virginity testing’

How is the test conducted?

It is conducted through the insertion of fingers or an instrument to gauge whether a woman’s hymen, the skin circling the vaginal entrance, is unbroken.

Not really. Many medical experts believe that virginity testing is unreliable, with serious repercussions for girls subjected to it, according to the International Society for Sexual Medicine.

There are a lot of different ways in which hymen breaks (in fact, some girls are born without it) for example through exercise or using tampons; hence, there is really is no way to find out if a woman is virgin or not. In October 2018, United Nations and World Health Organisation ruled out the practice terming it “unscientific, harmful and a violation of women’s and girls’ human rights.”

Is virginity testing practiced around the world?

Yet, for instance in Kanjarbhat community in Maharashtra up until activists started campaigning through a WhatsApp group, ‘Stop the V-Ritual.’

India is not alone in this. Virginity testing is a requirement for women wanting to join the police force or army in Indonesia, according to an article by Grazia. In Turkey, virginity tests are perceived as tests of family honour. In Egypt and Iran, the tests have been used as a type of political violence. In 2012 in Egypt, female protestors were reportedly strip searched and were forced to do virginity tests in Tahrir Square.

Read: We need to talk about the different types of hymens

Is it practiced in Pakistan?

Although there are no reports of a virginity test in Pakistan, there is a similar two-finger test carried out on victims of rape to determine whether a woman is a “habituated to sexual intercourse, according to DAWN. “The test although not a legal requirement, is a medical practice that has become part of the legal jurisprudence.”

Pakistan has yet to do away with this practice, deemed an extreme violation of human right.