Emily in Paris: What’s the hype all about?

Here are a few reasons why the new Netflix show, Emily in Paris misses the mark 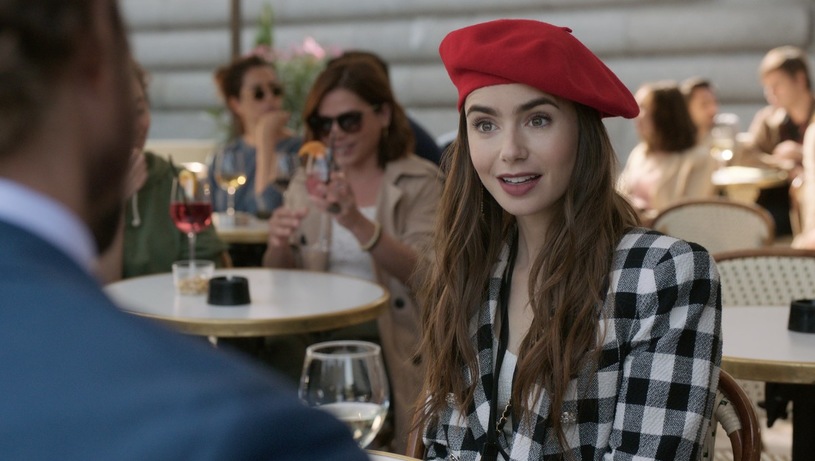 KARACHI: If you are someone who wants a sweet escape into something which will help you pass your time, without giving you much to think about, Darren Star’s Emily in Paris serves as a good piece of entertainment. Shot in France, the show sets itself in a small Parisian neighborhood and can serve as a good getaway from our COVID-struck reality. The Netflix show mostly feels like a soap-opera and ending on a cliffhanger, seems likely to be renewed for another season.

However, the show often throughout its 10-episode course relies on its Parisian charm, sometimes not even that. Here are a few places where Emily in Paris only slightly misses the mark (and a few places where it is completely off the mark).

Too often the show relies on good-looking men to get away with plot-holes. Why does Gabriel (played by Lucas Bravo) keep showing up everywhere? Why does Emily keep bumping into him? This takes suspension of disbelief away from the show and mostly depends too heavily on “as long as he’s hot, who cares?” The show relies more on Bravo’s appearance than it does on his acting.

Comment: Is there diversity for male actors on television

Watching Lily Collins reminds us of her romantic comedies such as Love, Rosie. It would have been refreshing to see a face that has not been seen in rom-com before. However, she does a stellar job as an actress and perhaps shows the biggest range of expressions compared to any other character on the show.

Perhaps one of the best cast members on Emily in Paris is Philippine Leroy-Beaulieu, who plays Emily’s unforgiving and tough French boss, Sylvie. Hard to impress, you barely see her smile around Emily. However, there is always a 360-degree shift in her character when an important client is nearby. She does an incredible job of playing a character who won’t let her guard down.

One sad part about the cast was that it was all white. Although Julien is black and Mindy is Asian, they’re nothing but ‘factors’ and not really in-depth characters on their own.

In the show, Emily’s character seems a little too optimistic. Let’s be honest, are Americans really that positive about everything? She believes she can accomplish anything now that she is in Paris, often sabotaging someone’s personal space, and not taking no for an answer in most cases. Emily’s character’s only arc in the show is breaking up with her ex-boyfriend and deciding to go to Paris. There is not much of an arc after that, and this happens within the first two episodes. Perhaps the only big change in her life in the show is finally getting to sleep with Gabriel. That is a character shift too small to create any real depth.

However, there are certain points that feel relatable. Struggling at a new job, a hard-to-impress boss, not knowing what to say in a lot of places, and making a move that seems awkward to everyone are a few things pertaining to Emily’s character that might be relatable to a young audience.

The makers of this show were aware of the kind of audience that will watch the show: driven, young, enthusiastic at new workplaces, energetic and bubbling with new ideas, and waiting for their chance to pitch it. The show does try to make use of that but slightly goes overboard with Emily’s confidence right from her first day in Paris.

During the show, she tries to explain how American films have happy endings and the hero should win, while she is told that films are not an escape from reality because one cannot escape life. Those in her surroundings insist that the French way of making films is closer to reality. It almost feels like the show is using Emily to put forward their own argument because the show could really use a pinch of reality.

None of the other characters like Mindy and Camille are explored, although they had a lot of potentials. Especially Mindy. Not even the character of Gabriel is anything other than unidimensional, even though he happens to be the male lead. You do not know anything about his life as a chef, his relationship with Camille, and how conflicted it all makes him.

One good thing the show does is showing that although the city is hailed as the romantic capital of the world, a number of relationships in the city are too complicated, portraying Paris too romantic for its own good. However, a lot of times, it reduces them to that. Antoine, a client and the married love interest of Sylvie, only has one noticeable characteristic, that he’s a sexual being. Towards the end, the show does reveal why he cannot leave his wife, but all we see Antoine doing is showing his teeth and trying to charm his way back to Sylvie.

The show does not make much use of the scenic locations in Paris. Yes, it does feature some of the most beautiful and famed locations of Paris but often misses out on the opportunity to use good lighting to show those locations in their glory. While the show is happy and mostly uses natural light for its scenes, frames, although pretty, often appear a little bland cinematically. The treatment of the show appears very ‘sit-comish’.

The costumes do come to the rescue, stealing attention away from simple lighting and dull colors in the background, but every once in awhile, you wish you saw Paris a little more cinematically.

Here is to hoping, that in case Emily in Paris is renewed for a second season, we get to see more characterization and a little less wine.