The Trump/Biden Presidential debate leaves everyone in shock

Among many unpredictable things to have happened during the debate, Biden uses "InshaAllah" in response to Trump who stated he would release his tax returns 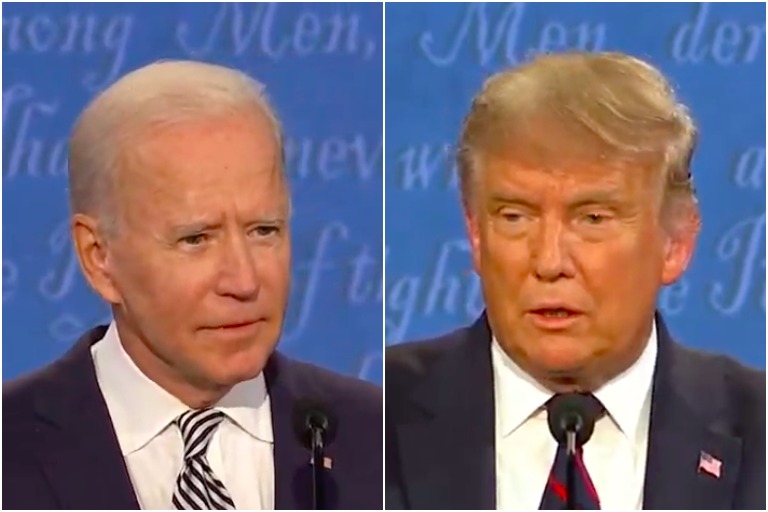 KARACHI: Speaking on the matter of voting, The Daily Show host Trevor Noah stated, “It is how America chooses which person it will be mad at for the next four years.” America moves closer to the elections and it has brought forth some of the most unpredictable events. One of such was the presidential debate that happened Tuesday night between President Donald Trump and Joe Biden, moderated by Chris Wallace.

The debate has been a show of frenzied responses from either side, mostly Trump’s. Several people have taken it to their social media to break down the conclusion of the presidential debate.

A commenter wrote, “Give the moderators the ability to turn off the mics!” However, what was perhaps the greatest takeaway for most people, including Van Jones from CNN, was that Trump refused to denounce white supremacy after several chances given to him to do so.

White supremacy has no place in America.

We shouldn’t have to beg the President of the United States to say that.

Some of the most consistent things to occur during the debate were Trump’s constant interruptions and him dodging the part where he was asked to condemn white supremacy.

However, one thing that Biden is getting the most highlight in our part of the world is over his use of the word InshaAllah other than saying “Shut the f*** up, Trump!”.

When Trump said “you’ll get to see” his taxes, Biden: “when? inshallah”(meaning never) pic.twitter.com/6J18Rgn4pL

Biden said “InshaAllah” — meaning ‘As God wills” in Arabic/Persian retaliating to Trump’s statement where he said he would release his tax returns.

Fadi Hilani, a linguistics professor at Montclair State University in New Jersey spoke to The Washington Post stating that it cannot be denied that Biden was being sarcastic as he uttered the word with a slight smirk.

“He was casting doubt, in a sarcastic way, on Donald Trump saying he would release his tax returns,” he said. “What Trump is saying is too good to be true.” However, it was enough to raise eyebrows from many, while others felt there were other, far more important takeaways from the debate.

Don’t know American politics, but politicians/celebs always drop a few Muslim phrases or say they have an interest in Islam just to widen their audience

And he didn’t even say it to appeal to a Muslim audience. He said it as a joke! To get back at Trump. He used it just like my Mom does when I say that I’ll do something we both know I won’t.

Trump said he'll show his taxes.
Biden replied what *sounds* like, "When, Inshallah?"
Assuming that was what he really said, the usage was clearly ironic and, I assure you, not what a Muslim would say in that snarky context.
I'm not Muslim but I live in Malaysia, so I know.

It was difficult to really see what either party brought to the table with each one yelling over the other and getting interrupted. Chris Wallace had little control over the panel as a moderator with several fiery brawls that often occurred between the two candidates before Wallace even posed his question. As the elections draw nearer, the battleground between the two gets busier. Even though Joe Biden leads the way with Kamala Harris only the election results can truly seal America’s fate.