Celebrities receive backlash while protesting against rape. What happened?

Frieha Altaf, Sarwat Gilani among various other celebrities criticized for being disingenuous and for hijacking a trans protest 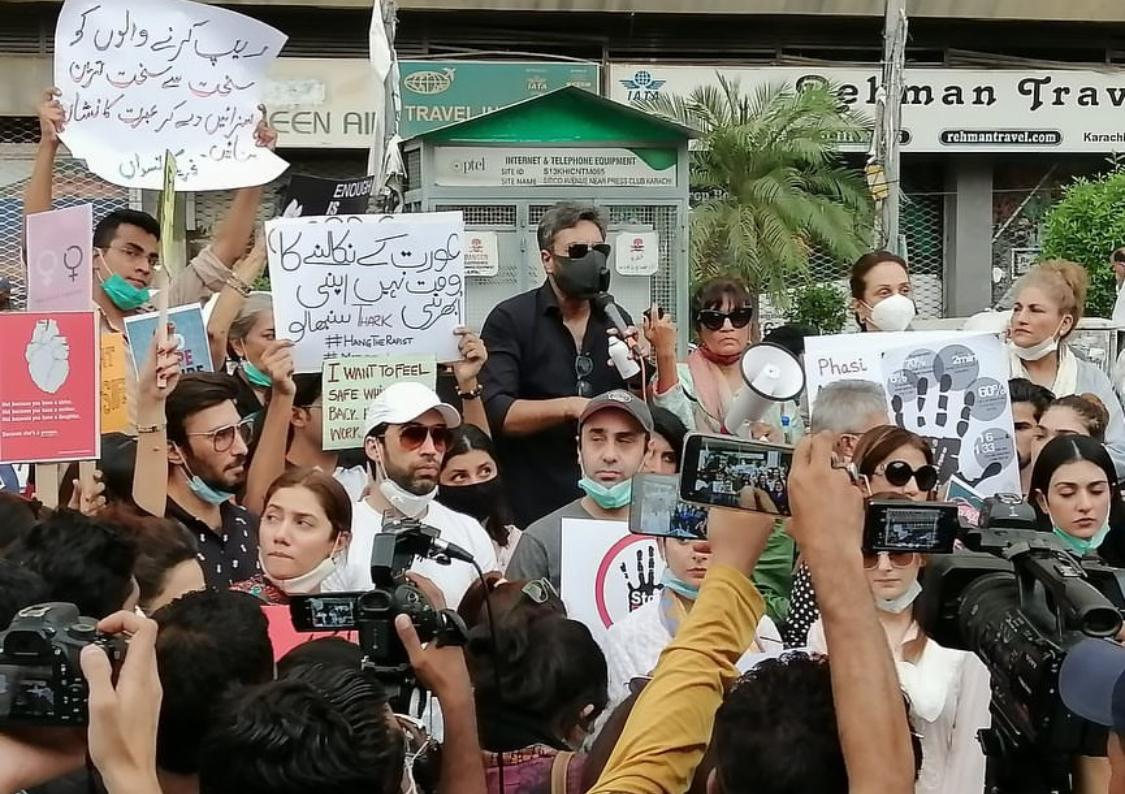 KARACHI: Last week, Aurat March, Women Democratic Front, and various other feminist organizations arranged a protest against the recent motorway rape incident that shook the whole nation to its core. This protest took place on the 12th of September. Celebrities also protested a few days later. But instead of receiving praise for taking a stand on the issue, most actors were criticized on social media. So, what happened?

Showing their support for the survivor of the motorway incident, a number of celebrities took to the Karachi Press Club to stand in solidarity with rape victims/survivors. Frieha Altaf, who encouraged a number of her peers such as, Sarwat Gilani, Ali Rehman Khan, Mahira Khan, Yasir Hussain, and Adnan Siddiqui to protest on the 14th, said, “It saddens me, it angers me to have to raise my voice against such barbaric incidents.”

We demand a secure nation for all women!! At home, on the streets, at work, alone, not alone, with kids, without kids, in a skirt or in a burkha. Where ever she may be, whoever she may be – we demand basic rights of safety🙏🏼 Proud of my industry for coming together for this cause – United we are stronger, our voices are more powerful and impactful🇵🇰🤍♥️ 📸 @mystapaki

These celebrities had Mahira Khan highlighting rape culture and the patriarchal mindsets that allow or encourage it.

#MahiraKhan attended the protest where the media fraternity gathered to fight for the safety of women and children, and spoke about how the mindset of males is what propels them to commit these acts of crime. @mahirahkhan #Nomercyforrapists #Womenarenotsafe #Childrenarenotsafe

The celebrity protest, however, has been criticized by a number of people for being exclusive, as well as for sabotaging an originally planned protest by the transgender communities and activists for 14th September.

IMPORTANT ANNOUNCEMENT We would like to request to join us on solidarity protest against domestic violence, burtal…

Various voices on social media have posed the question as to why these celebrities did not participate in the protest organized on the 12th of September.

They didn’t even bother to show support for the trans community, it was just a photo op for their instas and getting interviews out. What a shameful, will not endorse such elite and pretentious celebrities. Cis/ hetero privileged elite Pakistanis must see things of how we suffer!

Why did our celebrities arrange an exclusive rally for protesting against the #lahoremotorwayincident when they could have easily joined the massive one that happened a day before? For greater coverage? Publicity? Spotlight status? Someone please explain.

They are NOT allies – and do NOT confuse their opportunism with support. We did it with the NGOs before and look where it has led us.
We are repeating the same mistakes. Again.

All that glitters is NOT gold.

I really want to believe their hearts are in the right place, but wtf? This is cringe-worthy. And can someone explain why the celebrities felt the need to have their own protest against #motorwayincident vs getting more support for the first one? pic.twitter.com/Ezjwpu2opU

Still don’t understand why Pakistani celebrities had to have their own protest in Karachi? Was the common people protest not good enough for them? #amotorwayRape

Muhammad Moiz, better known as Ms. P Chatni, took to his Facebook to express his displeasure on the way the protest was taken over by these celebrities. Moiz highlighted in his video that the stars remained aloof from the trans community protesting alongside and also took away all the limelight in terms of media coverage. He stated that none of these celebrities joined the trans activists during the protest or actively spoke for the rape/harassment and mistreatment they face as a community. They were all fighting for the same cause, but celebrities chose to remain distant.

I am SICK of and DISGUSTED with the so called "celebrity", media and lifestyle crowd of Karachi.Adnan Siddiqui, Freiha Altaf, and Sarwat Gillani along with the one and only Yasir Hussain protesting against rapes but they didn't even come and show face with the trans community standing literally 10 feet from them. Mahira Khan, Ayesha Omar, and a few others joined later as well.Sarwat Gillani ka liberalism aur feminism sirf BBC interviews k liye hai? Is this ALL she learnt from Churails?? Yaani yeh kya beghairat kism Ka tokenism hai? Seriously. Disgusted to my core.

Co-founder of Queeristan, Aradhiya Khan Jack spoke to Cutacut and revealed how trans activists like herself were asked to “please wrap it up.”

a brief rundown of today's Khwaja Sira Protest outside the Karachi Press Club:i show up, to be immediately greeted…

A transgender activist who organized the protest, Sarah Gill said, “It was very heartbreaking for us to see that those celebrities who we thought are working for human rights and believe in equality were just putting forth a drama in real life. Of course, the media will cover Mahira (Khan). I’m not against them receiving coverage, but why did they not join us?”

Masks down for photo ops. pic.twitter.com/dV1x2VvEys

Sarah Gill lamented on the way nobody lent a helping hand or a voice. Nobody asked the community to talk to them about their struggles. “They were just there to show people on Instagram that they were there. If they came for us, they should have at least stood with us.”

Frieha Altaf was herself unavailable for comment. Her PR told Cutacut, “Media fraternity came out together for a protest at Karachi Press Club for the safety of all women and children and some other protest was also happening at the same time. We don’t know why people are raising this issue and comparing one protest to the other.”

Moiz showed his distaste to the fact that there was zero solidarity. There were a number of students from Dow medical college and hundreds of transgenders protesting for the same cause as the celebrities present on the occasion. “You had the power and the media attention, bring them in. A harmless 65-year-old trans woman is missing for the past two and a half months but recovering a trans person is not a top priority for our local police.”

“If you are so concerned about rape, what practical action have you taken to make the media industry a safe space for women? What mechanisms have you put in place to ensure a young girl from Gujranwala who comes to Karachi to be a model does not get raped and gets equal value and importance compared to the crowd you are currently swimming in? Is there a review body, if not a legislative one, that will review scripts or a female caucus that will unanimously refuse sexist content on television/media?” Moiz put forth some important questions.

“We need to be more inclusive. If we feel there is a gap, we need to sit and talk to sort it out,” said Aradhiya Khan Jack in conclusion.