Ayesha Omar spoke to Rose McGowan about the #MeToo movement

"I want women to know that they have been sold a lie that it was always going to be a man that was going to rescue them," McGowan shared with Omar 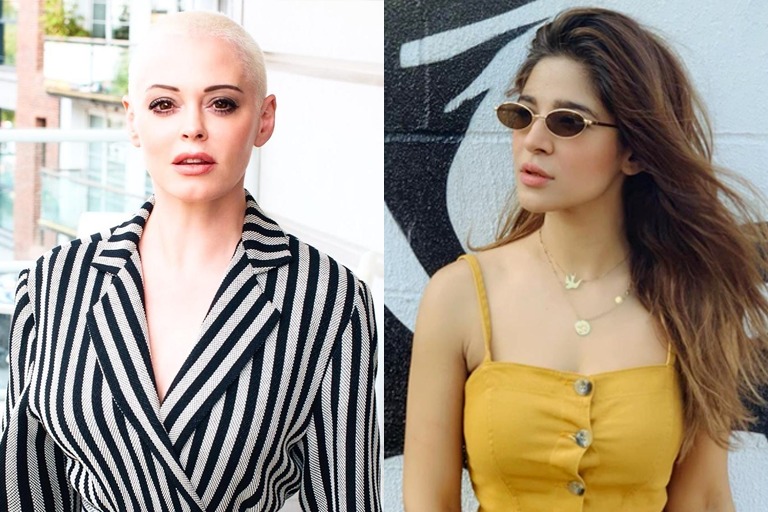 KARACHI: Not many people know that the #MeToo movement was originally started in 2006 by an activist, Tarana Burke, to raise a voice against the pervasiveness of sexual assault. However, the hashtag got more traction on social media after American film producer, Harvey Weinstein was accused of sexual assault in 2017. Of his many victims, Rose McGowan was one of the first to speak out against him.

1) @jeffbezos I told the head of your studio that HW raped me. Over & over I said it. He said it hadn’t been proven. I said I was the proof.

If the memory of the incident itself was not traumatic enough, the journey after her public accusation was also difficult. After Weinstein landed in jail, the survivor went to Mexico in order to heal with the help of a therapy dog.

Only last week, McGowan joined Ayesha Omar on an Instagram Live session to speak about her journey.

. In 2017, Rose McGowan decided to break the silence about Hollywood and one of the most powerful men in it, Harvey Weinstein. She decided to tell her story to the world. Did the world believe her? Not really. As is the case with most silence breakers. “Time” magazine, though recognised her as one of the Silence Breakers and their Person of the year, for speaking out about sexual harassment/assault. Soon after, several other actresses started sharing their stories of assault by the same monster. Her book “Brave” tells her story in her own voice. A singular voice that stands in a large arena full of women with similar stories of assault and rape. . In my eyes, Rose is one of the bravest women in the world today. I have watched several of her interviews and the way she articulates her feelings, emotions and thoughts is mesmerising. She hits the nail on the spot. Every single time. Rose is also an angry woman. A woman who allows herself to feel and feels no need to justify her emotions to anyone. Her fight is to allow all women in society to feel angry for what they have been through. For what they have been made to go through. Two years ago, I finally allowed myself to acknowledge and talk about my own sexual harassment story by a powerful monster, twice my age. When Rose agreed to go live with me, I felt I was dreaming. It was unreal. I thought non-stop about everything that I wanted to ask her, everything that I wanted to tell her about Pakistan. But she’s been asked everything and she’s answered everything…. that’s why I decided to chat with Rose about how she is doing right now, at this moment in her life, let the conversation flow freely…. and it did… it was real and honest, probably uncomfortable for some…. I did think of some solid questions to ask but never got around to them… they are all still floating in my head. We plan to go live again in a week, and this time go deeper into the various layers and constructs of societies all over the world. Would love for you all to join. Until next time folks! 🌹🧚‍♀️✨❤️ . . #ayeshaomar #rosemcgowan #metoo #feminism #feminist #womensupportingwomen #timesup #speakup #crazy #keepitreal #hereandnow

McGowan revealed that she had no friends supporting her when she came out with her story and realized that she was on her own. Though the survivor herself was never ashamed of what happened to her or afraid of labeling Weinstein as a rapist, she believed that the world was not ready for the truth until 20 years after the incident.

“I want women to know that they have been sold a lie that it was always going to be a man that was going to rescue them,” McGowan shared with Omar as she spoke about being her own supporter. According to her, women are sent into the world to be ‘polite with their hands tied behind their back’, which results in so many of them not being able to recognize the monsters they are surrounded by because they are never taught what to look for.

A little teaser from my interview with @joshsmithhosts for @glamouruk about #BRAVE and helping others to have their voices heards #RoseArmy. Watch it all on @glamouruk & @Youtube

The author of Brave further elaborated upon a culture that enables men to exploit their power, one that has to be cleaned up after an explosion, much like a messy closet which is untidy before it can be put into order again.

Read: What all women at Aurat March want

During the conversation, Ayesha Omar also hinted towards her own experiences with sexual abuse at the hands of a powerful man in the Pakistani entertainment industry when she was only 23 years old and at the beginning of her career.

The live chat ended with the two women feeling slightly more optimistic about the world and seeing it move towards a better version for all, and a promise to return with a similar conversation the following week.