The outcry against Sadaf Kanwal’s marriage exposes the women we choose to defend, and those we choose to blame 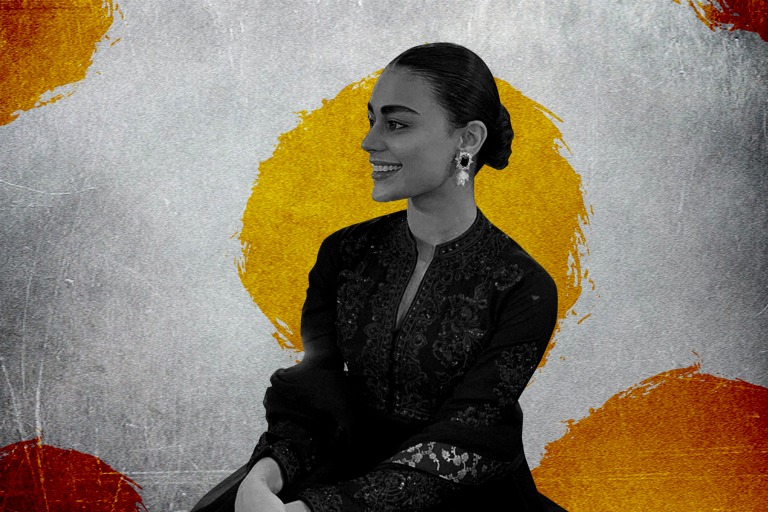 KARACHI: Sadaf Kanwal has never really been good with words, one of the many reasons why an outcry against her has been almost enevitable from all sides. One of the most famous models in Pakistan today, she has been under fire for dismissing the #MeToo movement, attributing Mahira Khan’s success to her fair skin tone, and making fun of Mansha Pasha’s style. While still acting as a brand ambassador for Nabila’s Salon, and profiting from a loyal fan following and her own patrons in the industry, Sadaf has nevertheless attracted ire and outcry with her controversial comments in the past.

Recently, the 26-year-old model did not need to say anything to incur an internet-wide pile-on. A picture is worth a thousand words, and a photograph of Sadaf Kanwal’s nikkah with Shahroz Sabzwari posted on her Instagram was enough to attract viral hatred for the newly-wed couple. Condemnation came from all corners: conservatives and liberals, sexists and feminists, and trolls and influencers expressed widespread outrage at Sadaf’s decision to marry Shahroz, citing the fact that Shahroz had been married to actress Syra Yousuf until a few months ago.

The response in real life was no less damning. I spoke to my mother and aunt about the celebrity nikkah, only to see their faces glaze over. My aunt was adamant that Shahroz had cheated on his ex-wife, actress Syra Yousuf, before marrying Sadaf. My mother, likewise, felt as if the sanctity of marriage had been violated.

“I wonder what kind of message this sends out to women who commit,” she said grimly.

The fear was universal. Feminists were concerned that Syra Yousuf, famed for her iconic role in the TV serial Mera Naseeb, had been wronged by her husband, with Sadaf allegedly enabled as ‘the other woman’. Conservative users slammed Sadaf as a homewrecker and slut, who couldn’t keep her hands off a married man. The internet-wide outcry eventually got under the celebrity couple’s skin, and Shahroz Sabzwari made a video denying allegations he had cheated on his former wife, and vowed to defend his family’s honor.

The sanctity of long-term commitment, which Pakistanis idolize as integral to the institution of marriage, had been threatened, despite Sadaf and Shahroz’ decision to put a ring on it. The news came on the heels of a different controversy, wherein a video of actresses Uzma and Huma Khan being attacked by a woman, who alleged they were having an affair with her husband, went viral on the internet.

For Pakistanis, both stories were cut and dried. The woman wronged, whether dupatta-clad or modern and successful, was the good girl. The woman perceived to be sexually licentious, helping a man violate his marriage vows, and hailing from a lower middle class background was the homewrecker.

Shahroz Sabzwari’s claims he hadn’t cheated faded into the dust. The public was bloodthirsty for our favorite national hobby: shaming people for their personal decisions, and pitting women against each other.

“In a world of Uzma Khan and Sadaf Kanwal, be a Syra Yousuf,” a Twitter user wrote.

In a world full of Uzma khan and Sadaf kanwal , Be a Syra Yousuf✨ pic.twitter.com/Rx0USwSWvm

It didn’t matter that Sadaf and Shahroz had tied the knot and no evidence has yet emerged to support allegations that their relationship was borne of unfaithfulness, regardless of how it looks. Judging by the outrage, it appears  Sadaf is the villain in this story, and Syra the hapless victim. Shahroz is mostly deprived of blame, but catches some anger for forsaking his marriage and marrying a woman deemed unworthy of love and affection.

While the projected narrative echoes the storylines of many of our TV serials, it speaks to a larger phenomenon of how women are portrayed in the media.

In 1912, psychoanalyst Sigmund Freud wrote about how men cast women into a binary, seeing them as saints or innocent virgins, who are put on a pedestal, or as whores or prostitutes, who are consequently degraded. Termed the Madonna-whore complex, a woman’s place in this binary also defined how deserving she was of love and desire. The virgin and wife cannot be sexual, and the whore and mistress cannot be worthy of love and respect.

“Where such men love, they have no desire and where they desire, they cannot love,” Freud wrote.

By transforming women into symbols, patriarchy polices their sexuality and denies them respect or sexual agency, since a woman cannot possibly possess both. And it’s not a coincidence that the woman deemed ‘sexual’ is usually associated with a lower class, lacking the social capital to be put on a pedestal. For example, Qandeel Baloch was shamed not only for expressing her sexuality in her videos, but also her rural, working-class background.

“[T]he tendency so often observed in men of the highest rank in society to take a woman of a low class as a permanent mistress. . . is nothing but a consequence of the need for a lower type of sexual object,” Freud wrote of this perception and its effect on the lives of the men who believe in it.

As a nation, we have internalized the Madonna-whore complex. For us, Syra Yousuf with her charm and delicate features deserves respect and support, and Sadaf Kanwal, with her thick eyebrows and exaggerated looks, her lower-middle-class background, and politically incorrect statements warrants nothing but scorn and contempt.

Attraction is flesh. Connection is soul, 🌾

How do class dynamics impact the way we see women?

Sometimes, the class aspects of this dichotomy are reversed. In TV dramas, the elite woman is associated with lust and desirability, whereas the morality of conservative, urban patriarchy is mapped onto the body of the middle class woman.

But real life is often different, as seen with the public reaction to the conflict between Uzma Khan and Amna Usman. The actresses are characterized as sluts, caught red-handed with a married man, and their Urdu accents deprive them of cultural capital in comparison to Amna Usman, who not only had the employ of armed bodyguards but fluently spoke English in her video explaining the incident.

Sadaf has spoken in the past of her “humble middle-class background”, and speaks mostly in Urdu in interviews. And while Syra is upbeat and intelligent on talk shows, Sadaf lacks the same wit and timing, incurring the disdain or distrust of viewers.

And yet, Sadaf’s impact on fashion and beauty in Pakistan is inestimable. With her tanned skin, chiselled face and thick eyebrows, Sadaf has redefined what the millennial model in Pakistan looks like and paved the way for unconventional faces in an industry dominated by light skin.

The intersection of denigrated looks in a colourist society and Sadaf’s lack of cultural capital on account of her class background intensifies the awaam’s bias against her. Feminists, instead of defending Sadaf Kanwal against body-shaming and misogynistic attacks, are more invested in Syra’s modern, good girl image.

The truth is, we have no idea what these women are like in real life, and the record of what actually happened has yet to be investigated, or clarified by all parties. But respectability politics, colourism and classism shape our collective response to pop culture and the way in which we elevate some representations above others.

Pitting women against each other doesn’t just clear the man of accountability, it also validates the virgin-whore dichotomy instead of reconciling respect with sexual agency. Women should be protected from sexist harm regardless of their personal or sexual choices, and whether the morality of a celebrity couple’s consensual relationship falls within the remit of public judgment is still debatable.

Sadaf and Shahroz consented to a nikkah, the respectable decision in an Islamic country. And while the public may feel aghast at Shahroz elevating the woman they deem unworthy of tenderness and love to marriage, an old adage still rings true. It’s really not any of our damn business.