Violence against women, in numbers 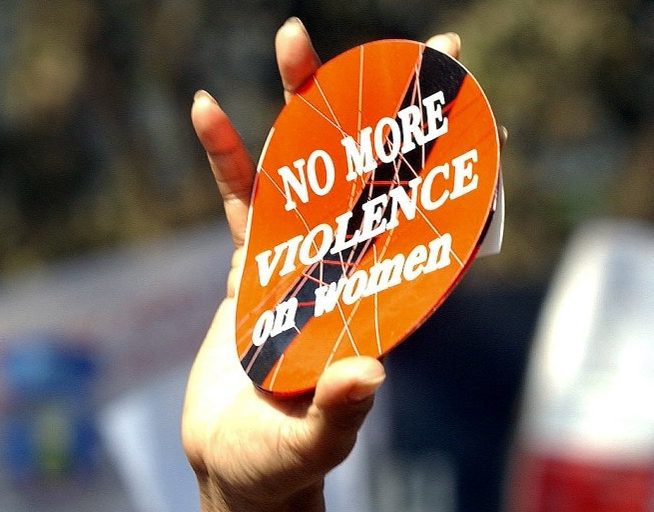 A delegate holds aloft stickers during a protest against violence. PHOTO: AFP

KARACHI: November 25 marks the United Nations’s International Day for the Elimination of Violence against Women is an occasion for governments, international organizations and non-governmental organizations to raise public awareness of the violence against women all over the world. This day is intended to not only bring awareness to the vast injustices that women face in regards to various forms of violence, but it also reminds us to develop empathy towards the female race that is one of the numerous significant necessities in order to prevent these issues.

In an attempt to help people empathize with and understand and act on violence against women, we have briefly compiled the different forms of violence that women face with regards to the number of victims.

Read: Women assemble in Lahore to protest violence against women

This form of violence refers to the personal relationships that women have with men via a current or ex partner. There are several forms of violence in this category such as sexual violence, physical violence and emotional violence. This form of violence can and does lead to severe mental problems and physical impairments in extreme cases and affects the functioning of the victim in society i.e. with work life, family life or even with friends.

The world health organisation reports that

-Globally, as many as 38% of murders of women are committed by a male intimate partner.
– Almost 30% of all women who have been in a relationship have experienced physical and/or sexual violence by their intimate partner.

This form of violence refers to individuals who are not intimate partners (they could be members of the family etc).

-Of the 87,000 women who were intentionally killed in 2017 globally, more than half, 58% were killed by family members, meaning that 137 women across the world are killed by a member of their own family every day.
-Adult women account for nearly 49%  of all human trafficking victims detected globally. Women and girls together account for 72% , with girls representing more than three out of every four child trafficking victims.

This form of violence refers to a type of collective action, sometimes prompted by culture or religion and sometimes by prejudice. This can further include hate crimes and different ideologies of intolerance.

– At least 200 million women and girls aged 15-49 have undergone female genital mutilation in 30 countries with representative data on prevalence.
– 72%  of trans and gender diverse students reported having been sexually harassed at least once during 2016, in contrast to 63% of female students.
– More than 20 million women and girls in just seven countries (Egypt, Sudan, Guinea, Djibouti, Kenya, Yemen and Nigeria) have undergone female genital mutilation by a health care provider.

Women are not even safe online. This form of violence refers to the harassment that women face through the various platforms of social media.

– 1 in 10 women in the European Union report having experienced cyber-harassment since the age of 15 (including having received unwanted, offensive sexually explicit emails or SMS messages, or offensive, inappropriate advances on social networking sites).
– 82%  of women parliamentarians reported having experienced some form of psychological violence and cited social media as the main channel through which such psychological violence is perpetrated.