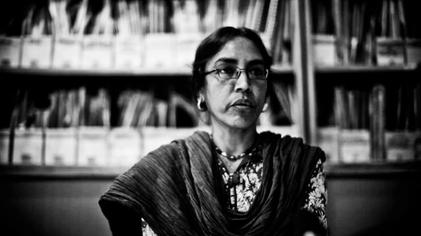 KARACHI: Perween Rahman was a social activist, social educationist, architect, urban planner, writer and director of Orangi Pilot Project (OPP). She gave selflessness a new meaning. She was not only one of the most giving social activists in Pakistan but she was one of the most empathetic towards a diverse line of issues surrounding her country. Not only was she a brilliant architect with ideals of reforming Karachi’s landscape via also maintaining and enriching the history of it but she worked very hard in achieving patriotism through reconstructing.

Her attempts in reconstruction were directed towards architecture, land-mafias, environmental corruption and aspects surrounding community empowerment. This is a recollection of all the incredible things she strove for till her death and a reminder to unravel and continue the projects she started to achieve what she was unable to do so upon her murder seven years ago.

Perween worked at a private architecture firm before being recruited to become Joint Director of the Orangi Pilot Project in 1983. OPP is a Karachi-based NGO that works with the city’s poorest communities to improve their neighbourhoods. She began to start managing housing and sanitation programmes as a start at the company and then in 1988, when OPP was split into four organisations, Perween  became director of OPP-RTI (Orangi Pilot Project – Research and Training Institute), she took on more programmes relating to education, youth training, water supply and secure housing.

In an interview with Pakistan Calling (below), she stated that she, along with OPP, worked closely with government officials on water distribution corruption and found that it is a huge operation that has seen active participation by individuals of power and strong connections with politicians. She established that the water tanker mafias are causing the average man to suffer and struggle for a livable supply of water daily. She quoted the example of Orangi town which sources its water from the Hub dam, that could supply 40 million gallons of water to it but due to these mafias it only receives 10 million gallons. In a state of despair she says “30 million gallons of water just disappear.”

Read: How to conserve water at home

In  her publication Katchi Abadis of Karachi: A survey of 334 katchi abadis – Existing situation, problems and solutions related to sewage disposal, water supply, health and education, her extensive research details the possibilities that are in store for the denizens of Karachi if they were to live in a sustainable manner that is free of corruption and speculative greed of those who have control over the sources of distribution. This publication also serves as a voice for the poor who have to live in disparaging conditions and offers solutions that can aid in a better standard of living in those areas.

Her views on water supply and distribution issues can be seen in this interview posted by ‘Pakistan Calling’ on YouTube.

Mahera Omar’s Perween Rahman: The Rebel Optimist, a documentary film made on Perween’s efforts,  featured interviews from her colleagues and family members remembering the strong and devoted woman that she was. In a Dawn article , her sister Aquila Ismail explained  Perween’s obsession with security after their family’s move from Dhaka, Bangladesh, during the war. She added that Perween wanted to create safe spaces targeting low-income groups and wanted to use her architectural expertise in designing secure housing as well.

Perween often stressed on the importance of intelligent planning and design and spoke of it at various conferences both locally as well as internationally. She recognised the significance of mapping. At a talk with ACHR in Bangkok, she said, “Maps are to our work what x-rays are to a doctor’s: they tell us what the problem is and how to resolve it.” Mapping, as she suggested, is the most empathetic way of constructing a space because it identifies directly what the problem is and how to solve it.

As a development worker, she argued that if one is unaware of what exists in any settlement of any city, then there is a rising fear of her doing “what the government does.” She explained this by giving the example of the government trying to lay sewerage lines without mapping and ended up cutting phone lines and water lines because of lack of research which resulted in the denizens of that area being greatly affected by it. She also explained that by mapping areas that have become urban help those areas greatly. In the ACHR meeting she states that the government data of one of the areas she mapped showed it had 400 settlements when there were actually 2,000, according to her research. The point of such research was not only to be empathetic but to also help the government understand that the actual number of settlements were too many to carry out an eviction plan. In this way, she greatly made a difference in allocating smart planning in the industry.

In addition to her revolutionary ideas, she established the Urban Resource Centre that aims to research and document some of the major issues in Karachi as well as monitor developments and processes related to them. This centre is designed solely to help the poor (by understanding their point of view of living) and subsequently better help the areas they are located in. In an article written by her sister after Perween’s death, she said, “Everywhere else she went to talk about the model of people-government partnership through which sanitation, housing, education, and health for the poor could be obtained.”

Perween Rahman’s murder held an example for the need for Pakistan to ensure security and support for community service workers and recognise the amazing potential that the work they do has and can achieve for the development of the poorer areas of Karachi that are suffering at the hands of land and water tanker mafias. She was indeed a force to be reckoned with and displayed utmost bravery and determination to be a selfless woman with nothing but positive change in mind for her city. She has since inspired other NGOs and university students to stand in solidarity with her and attempt to continue the work she dedicated her life to.