On the poet's 12th death anniversary, let us look back at his life 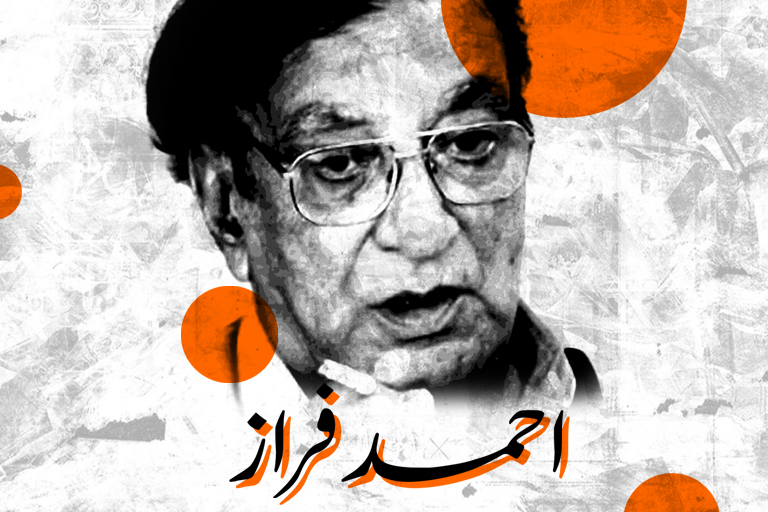 KARACHI: Today marks the 12th death anniversary of Syed Ahmed Shah who passed away in 2008 at the age of 77. Known by his pen name, Ahmed Faraz, he was considered to be amongst the best Urdu poets of modern times. Faraz’s ghazals, poems, and books remain popular and appreciated by many across Pakistan and India, both.

Faraz’s work was a reflection of his passion, not just for writing but for his country as well. He wrote against capitalism and materialism, along with romantic pieces. He may not be present with us today but he lives in the hearts of many, be it in the form of his poems or the musical adaptations of his work.

Read: 5 inspiring verses by ‘poet of the East’ Allama Iqbal

Ahmed Faraz belonged to a Hindkowan background, and later moved to Peshawar with his family. He attended Peshawar University and received a Master’s degree in Urdu and Persian. Faraz had also attended college in Peshawar and it was during that time that he got influenced by famous poets Faiz Ahmed Faiz and Ali Sardar Jafri.

Under the influence of his role models, Faraz started writing while he was in college. The Tanha Tanha ghazal collection, a book published in 1957, was one of his first works. His poetry mainly revolved around the themes of love and beauty. Some of his most famous works include Sab Awazain Meri, Khuwab Gul, Janan Janan, and Ghazal Bahana Karon. Faraz was also one of the very few poets whose poetry was sung with renowned singers like Noor Jahan, Ghulam Ali and Mehdi Hasan adapting his poetry in their songs.

Faraz recited his own poetry as well and was often high in demand at mushairas. The poet was critical of the political regime in Pakistan and addressed the military rule during the reign of Zia Ul Haq in his poems for which he was also arrested. Faraz then went into a self-imposed exile and spent a few years outside of Pakistan. Returning to his homeland, he was appointed as the Chairman of the Pakistan Academy of Letters and later chairperson of the National Book Foundation in Islamabad for several years.

For his outstanding contributions to the world of poetry, Ahmed Faraz received numerous national and international awards including the Adamji Award, Abaseen Award, and Kamal-e-Fun Award. He received the Hilal-e-Imtiaz in 2004 but returned the award two years later as a form of protest against then president, Pervez Musharraf. After his death, the government of Pakistan awarded him with the Hilal-e-Pakistan.