Is smoking associated with masculinity? 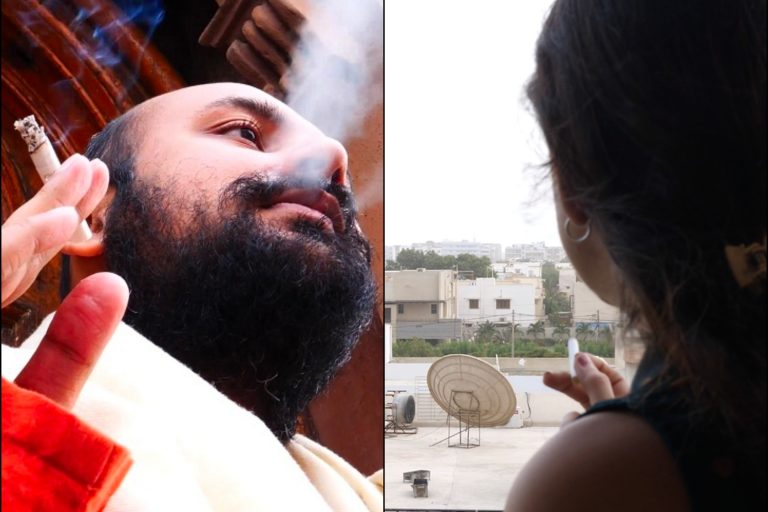 Fahad Naveed (L) explores intersection of gender and the act of smoking in his short film. PHOTO: Fahad Naveed

The screening was followed by a panel discussion on the film – between the film’s director and producer, founder of Girls at Dhabas Sadia Khatri and artist Samya Arif, and hosted by Jahanzeb Hussain. The panelists dissected how, and if so, the practice of smoking is gendered.

After quitting smoking one summer in New York, Naveed returned to Pakistan, where the habit isn’t as profoundly discouraged and a lot more common. More importantly, in Pakistan, smoking is still associated with masculinity, with “being a man” – a theme that Naveed largely explores in his film.

The synopsis of Puff Puff Pak states, “After quitting smoking in New York, [Naveed] goes back home to Karachi, where his friends still smoke like chimneys, feminists are lighting cigarettes to fight the patriarchy, and his mother is going through chemotherapy.”

The film featured Naveed’s mother, as well as panelists Khatri and Arif themselves, who gave their insight on being Pakistani women who smoke.

The panel discussion that followed continued the conversation in the short film on how gender stereotypes are tied to smoking.

Naveed said he was aware that quitting to smoke would be a completely separate experience for a woman. “When it’s part of your [gender] identity, quitting is different.”

Khatri elaborated that smoking is a “form of protest and a source of power” for women and that quitting smoking for women carries “different connotations and weight”.

Read: Smoking scandal: Elephant seen lighting up without any regard for public image

A member of the audience added to the discussion, saying that many men feel threatened by women who smoke as smoking and cigarettes are associated with aggression, and the male body, and how the male body is perceived in society.

“Smoking is connected to gender issues in our society,” said Arif, adding that it makes one wonder that “if men have an issue with women smoking, what other issues would they have?”

She added that it wasn’t so much a question of why women smoke, rather why couldn’t they smoke freely and openly. “Are my lungs smaller or something?” she asked.

In the 29-minute-long documentary, Naveed touches upon several themes: kicking the habit, gender, tobacco companies and advertisement, and cancer.