In viral satirical post, Pakistani woman boasts of her husband's piety by having him wear a burka 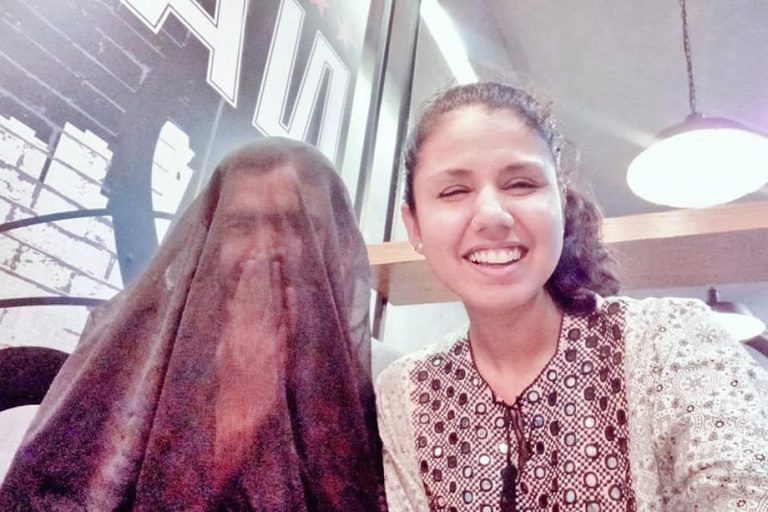 KARACHI: A young millennial couple in Karachi, who run a blog called “The Mewly Weds”, unveiled the unfair culture of Pakistan towards women, one by one via a post on social media. The post, meant to be a satirical commentary on society’s double standards towards gender, was written by Hera, the wife’s perspective.

“This is my beautiful husband. Of course, you can’t see how beautiful he is because I make sure he keeps his beauty (read: identity) hidden as I am the only true haqdaar (owner) of it,” Hera says, taking a jibe on those who push the burka and niqaab on the women in their house as a means to control them.

“Everything he is, all his achievements, dreams, all of his life, he owes it to me,” she adds, mocking people who romanticise the idea of a woman’s entire existence belonging to a man.

Hera then says, “Any namehram’s nazar is haraam on him (It is a sin for strangers to even look at him), so I prefer he stay at home as the world is a bad place.”

Ironically, some men believe  women become instantly more desirable and attractive as soon as they don the burka or niqaab, defeating the entire purpose of de-sexualising females. Often, people justify wearing the burka and niqaab by saying that those items of clothing offer protection against sexual violence on women.

But of course, there wouldn’t be any need of wearing the robes if women stopped going outside the house at all, unless they are accompanied by a man.

Read: A university has replaced Valentine’s Day with Sister’s Day and here’s how we’re coping

“However, it is ok when he goes out with me. I took him to dinner at Mad Roosta last night,” Hera adds, turning the discussion towards the undue pressure society places on a woman’s fertility.

“We only go there because they use steroid free chicken and we are very health conscious, especially after knowing how growth hormone injected chicken can affect fertility. I don’t want his fertility to be affected because his major purpose of existing is to give me children and make me a mother. So no matter what, I only bring him to eat out here.”

A woman in Pakistani society is not successful unless she has given birth — the same pressure and standard hardly ever applies to a man (not that this is healthy either way).

This is my beautiful husband. Of course, you can't see how beautiful he is because I make sure he keeps his beauty…

“I Iove how he modestly hides himself while going out, as he is khuli tijori (open safe) and I wouldn’t want him to get molested,” she says, pointing out how ridiculous the idea is to think a piece of clothing is a defense mechanism against violent men.

“Even then if he gets molested, we will accept that as qismah (luck) and hope that the abuser will be punished in akhirah (Day of Judgment),” Hera continues, shaming people who encourage victims of sexual abuse to stay quiet and accept what happened.

“I, on the other hand, can roam around and loiter on my own, in my chadda banyaan (underwear and vest), in my tank top, in my spaghetti strap top or even shirtless, because I am a woman.

“I am a woman and hence I understand perfectly how horrible women can be, but I am not scared of other women. They will not assault me. And even if they do, I will not talk about it because it will prove me weak and defenseless in front of the whole wide world,” Hera adds, shedding light on the man-on-man sexual violence.

She then points out the double standards of people who say they believe in equality, but in reality they are reek of sexism and toxic abusive habits.

“Also, I let him go out to work and drive because I am a strong believer in equality.” Notice the word “let”, which when used shows the obvious power dynamics in any relationship.

“However, looking at na-mehrams and interacting with them in any way is strictly prohibited. It is my duty to ensure these practices as a pious husband is my key to jannah, how will I get to sleep with 70 virgins in the afterlife warna?”

Many men think it is their job to tell women what to do so that they may become pious, and in doing so, the men will earn rewards and enter heaven — a big motivator for many Muslim men controlling the women around them.

The couple wraps the post on a high note, speaking on behalf all of such men who feel entitled to rewards and expect to be exalted for their sexism and misogyny disguised as benevolence.