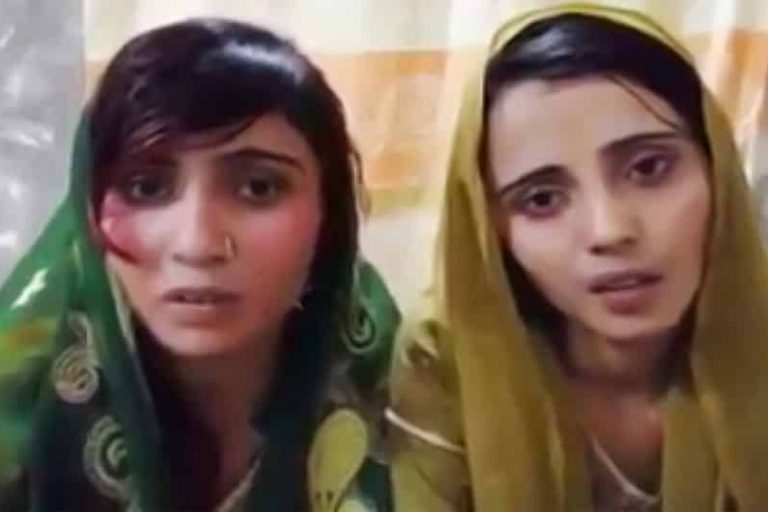 SCREENSHOT: Reena and Raveen, the teenage girls that have been reportedly forcibly converted to Islam.

KARACHI: This year’s Holi celebration on March 20 were marred by reports of two teenage girls from Pakistan’s Hindu community being allegedly abducted and forced to convert to Islam. Here’s a look at how the case unfolded:

The incident first surfaced via reports on social media of sisters Reena, 14, and Raveena, 16, going missing from Daharki, city of Ghotki district in northern Sindh. The reports emerged when the Hindu community was celebrating the festival of Holi, commemorating the victory of good over evil.

The girls’ family claimed that they were kidnapped and married off to Muslim men after forced conversion to Islam.

Is this a case of forced abduction?

Four separate videos emerged following the uproar on social media. In one video, the two girls say they accepted Islam of their own free will and are happy.

However, drawing a stark comparison, in another video, the father of the two girls is seen sitting on the floor at the police station in Daharki, and beating himself up to protest the alleged abductions. “Don’t tell me to be patient anymore,” he says.

Watch: The White in Our Flag

A separate video shows the girls’ brother protesting and saying the two sisters were abducted and forced into changing their religion from Hinduism to Islam.

In the latest on the issue, yet another video shows a cleric sitting next to the girls and the two men they married. He says the girls were influenced by the teachings of Islam but were never given the chance to accept the religion. “When they converted, these young men who live nearby married them,” he adds. “Now the family of these girls is spreading false propaganda and is threatening their lives,” the cleric alleges.

Copies of their nikkahnama have surfaced too. After conversion, Raveena was named Aasia Bibi and Reena was named Shahzia, according to Samaa.

Father of #Reena 14 #Raveena 16 who were forcefully converted to Islam is beating himself up out of sheer desperation. He says either help me get my daughters back safely or kill me. Yeh thappar yeh buzurg apne moun per nahi maashray ke moun per maar rahay hain @BBhuttoZardari pic.twitter.com/cpmlvruAEC

Brother of #Reena and #Raveena along with the local Hindu Community in Ghotki protested their abduction on #Holi but the Police has tried to dismiss the matter by citing a video of the two sisters in which they claim they will fully converted to Islam. pic.twitter.com/NC9dL49Lxc

Thread @BBhuttoZardari #ForcedConversions. 2 sisters #Reena 14 #Raveena 16 were converted to Islam at Darga #BarchundiSharif in #Ghotki. As per Dargah girls wanted to convert to Islam since long influenced by it's teachings but 1st act after conversion was underage marriage pic.twitter.com/ztl3x13q6N

Has the police taken any action?

According to Dawn.com, police have detained at least seven people who are suspected to be involved in the reported incident. The suspects include the Nikkah Khwan (marriage officiator) who solemnised the marriage, a leader of the Pakistan Sunni Tehreek, and some relatives of the two men who had married the two girls. Further investigation is underway.

Human Rights Commission of Pakistan issued a statement condemning the incident, urging the Sindh government to pass the pending 2016 bill against forced conversions. The civil society is also raising the issue of child marriage in Pakistan, where in Punjab, the legal age to get married is still 16 years.

Has the government taken any action?

On Saturday, Information Minister Fawad Chaudhry tweeted about the Pakistani government taking notice of the reports of abduction of the Hindu girls and the alleged forced conversion as well as their underage marriages to the young Muslim men.

Prime Minister Imran Khan has also issued orders to Sindh and Punjab governments to work together and recover the affected teenagers who have been reportedly taken to Rahim Yar Khan in southern Punjab.