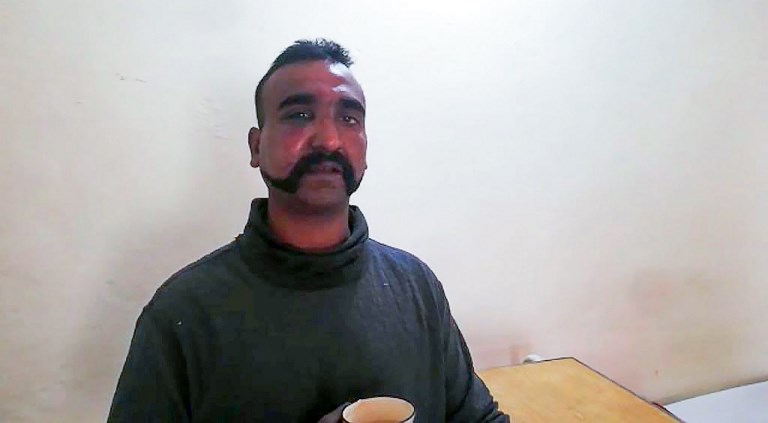 This handout photograph released by Pakistan’s Inter Services Public Relations (ISPR) on February 27, 2019, shows captured Indian pilot looking on as holding a cup of tea in the custody of Pakistani forces in an undisclosed location. PHOTO: AFP

KARACHI: Over the course of last two weeks (and seven decades!), India and Pakistan have enjoyed a relationship that can be best described as volatile.

In light of the ongoing tensions between the two countries, here’s what we should know about the international law, in this case, the Geneva Convention:

What is the Geneva Convention?

The Geneva Convention is most commonly referred to as the updated agreements signed in 1949 in the aftermath of the Second World War. The treaty essentially revised the previous two accords, from 1864 and 1929 respectively, regarding international humanitarian law, adding two new conventions regarding “Treatment of Prisoners of War” (POW) and “Protection of Civilian Persons in Time of War”.

The third Geneva Convention deals with the treatment of POWs. As per the treaty, all signatories, including those who haven’t signed but are party to the armed conflict, must “respect” the international law.

The treaty is applicable during peacetime as well as war, even if the parties to the conflict do not officially recognise the state of war.

Read: Here’s how some people from both sides of the border are urging India and Pakistan to #SayNoToWar

Who is a POW

Who falls under the description of a POW? The Geneva Convention says the POW status applies to anybody that has “fallen into the power of the enemy”.

Article 3 states the protection applied to any POW who is “taking no active part in the hostilities, including members of armed forces who have laid down their arms and those placed hors de combat by sickness, wounds, detention, or any other cause”.

1. The treaty “prohibits” signatories from committing the following acts should they take in a POW:

2. The wounded and sick shall be collected and cared for

3. If questioned, the POW is only bound to provide their “surname, first names and rank, date of birth, and army, regimental, personal or serial number, or failing this, equivalent information”. As per law, they are not bound to provide any further information. However, if a POW “willfully infringes this rule”, they may risk losing “the privileges accorded to his rank or status”.

The convention mandates that Detaining Powers must grant a period of at least six month from the date when the POW was captured should the Power sentence the prisoner to death.

As per the Convention, the prisoners of war may be released “on parole or promise” as per the law of the country that has captured them. The treaty further says that the POW should be released and repatriated “without delay after the cessation of active hostilities”.

In essence, the convention does not lay down a specific timeline of repatriation.

You can read the detailed document here.