Few sane voices are providing an alternative point of view, one that tells people to be patriotic by rejecting the idea of war 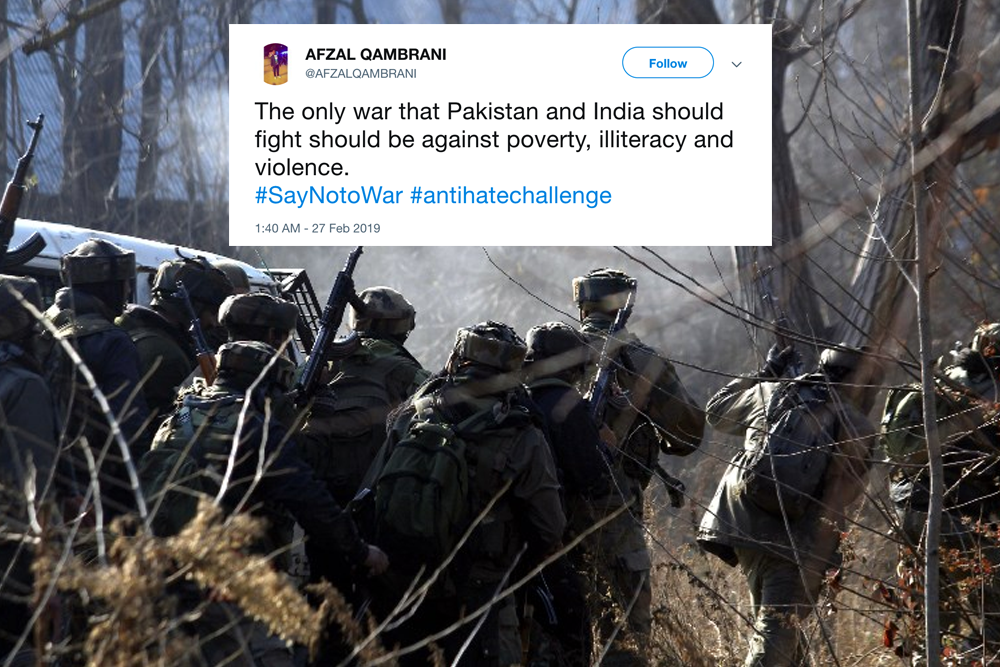 KARACHI: Following an attack in Indian Occupied Kashmir and subsequent rising tensions between India and Pakistan, it’s shocking to see the displays of jingoism by people, especially the Indian mainstream media. However, there are a few sane voices on both sides of the Indo-Pak border that are trying to provide an alternative point of view, one that tells people to be patriotic by rejecting the idea of war and #saynotowar.

Here’s what they have to say:

Love Thy Army… Help Them Live

Im with our Troops and thats why i dont want them dying. No Wars 🙏🏽

No, that’s not the way to retaliate. Aaj hum kar rahe haiN kal ko hamarey bhi maraiN ge.
there were fighter pilots who are gone too early. May their families get strength, and I hope no mother receive ashes and bones covered in a flag #SayNoToWar https://t.co/NRUJZdRaVc

The truth is: politicians and televangelists, and the educated masses with access to social media propagating war from the comfort of their homes, forget that soldiers are ordinary humans, with children and families, much like themselves. If they really loved their armed forces’ officers, they wouldn’t want them to die.

Who benefits from war?

Beneficiaries of this war:
1) Military economy in Pakistan
2) Hindutva Sarkar in India
Losers: The People

#SayNotoWar … it’s just a result of toxic masculine ego centric ideas with no benefits attached to it… it only oppresses the already oppressed genders and class , a few people can not just decide massive destruction of lives and land for us.

War have never benefitted anyone except boasting the egos of warmongers , everyone should call for a ceasefire #SayNoToWar

War reaps no benefit. In fact, it is a battle of egos and hyper-nationalism gone too far.

All those who were cheering and pumping their fists in the air for war yesterday: there are many of us who rejected and refused your celebration. Today’s escalation is why. No one wins in war, both countries children die.

People who are pro-war are those who have never felt the pain of losing loved ones, who never known how it feels to see your homes destroyed. How it feels to be injured with no medical help in the vicinity. Because its war! Talk and destroy terrorism not each other. #SayNoToWar

If you are thinking about war then think about yourself standing tumult infornt of your razed house, family corpses and waiting for a bullet or missile to rampage your existence completely. Because War is accursed, trifle and exorbitant affair that will only bring miseries.

Seeing horror and death at the frontline should make you want peace not more war #SayNoToWar https://t.co/XwoNRm4CR9

Pakistani warmonger is no different than an Indian warmonger

To all those in Pakistan who are celebrating this, you are no better than those we were criticising yesterday. Warmongers on both sides of the border are cut from the same cloth, which is woven with threads of hatred and soaked in blood. #SayNoToWar

Fereeha- this is an armed conflict between two nuclear powers that has escalated. As an accomplished journalist, the least you can do is to not use this horrible situation to insinuate jokes and tease a Bollywood actor. No one will win a war between India and Pakistan. https://t.co/WXPwgEZdua

Where countries’ resources should really be utilised

War is a race of egoism , let’s transfer our ego against poverty , diseases and ignorance. May peace prevail across the globe. #SayNoToWar

The only war that Pakistan and India should fight should be against poverty, illiteracy and violence.#SayNotoWar #AntiHateChallenge

Both countries #Pakistan n #India have so many issues which r common-food, poverty etc. Both r victims of #Terrorism