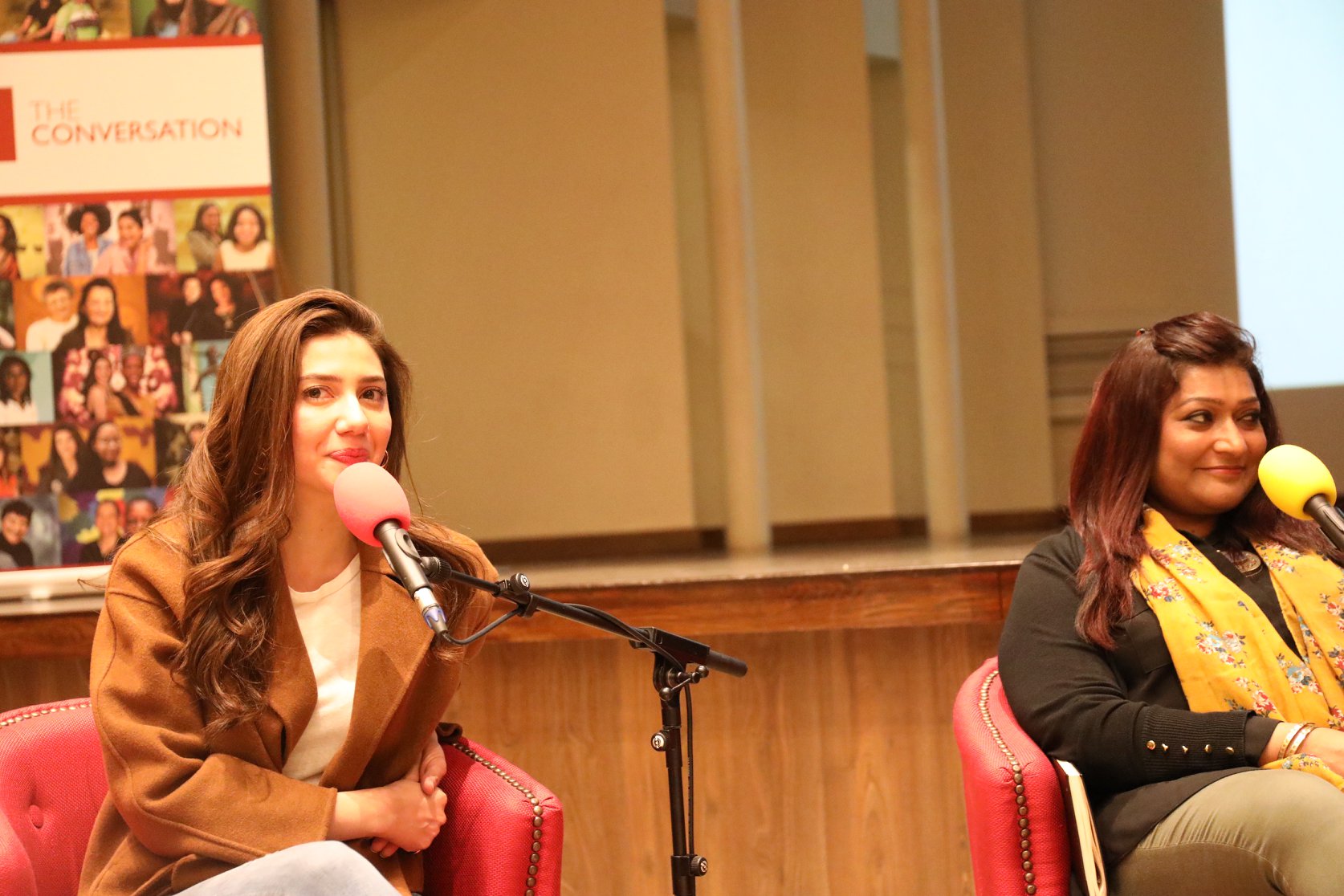 KARACHI: Last week, a panel discussion took place in Karachi where high-profile Pakistani women like the actress Mahira Khan, comedian Faiza Saleem, lawyer and activist Nighat Dad, and national footballer Hajra Khan came together to tackle the question: What is it like to be a woman in Pakistan?

Titled “The Conversation“, the event was put out by BBC World Service at the Institute of Business Administration (IBA) in Karachi. Kim Chakanetsa, a BBC journalist and moderator, began the conversation about how “Pakistan is a place of stark contradiction”. Pakistan is a country that ranked second to last in the latest Global Gender Gap Index, only above the war-ravaged Yemen, yet Pakistanis also voted in a female prime minister Benazir Bhutto, she said.

“Depending where you’re from, getting an education or having a career can be a real challenge,” Chakanetsa said, as she turned to the panelists to ask what being a woman in Pakistan means to them.

Pakistan National Women’s Football team Captain Hajra Khan said being a Pakistani woman means she “might be a top-level athlete… but [she] might lose bits of [her] family in the process” — which is perhaps the hardest bargain any ambitious Pakistani woman draws, and is forced to deal with if her family does not support her in pursuing her career goals.

Comedian Faiza Saleem said she might be breaking grounds in comedy but is still “expected to look a certain way in order to feel beautiful, to feel worthy”. She’s “breaking ground but still having to conform”, as Chakanetsa put it.

The floor then opened to audience for questions, and multiple themes were discussed:

On dress codes for women and what they represent:

A member from the audience asked why women who wear the hijab are portrayed as under-confident as opposed to those who don’t observe the same dress code, and are shown to be more confident.

Saleem explained it perfectly: she said, in the Pakistani media, women who wear the hijab are portrayed positively as opposed to women who don’t observe it. “When it comes to actual hijabis, there is very little (authentic) representation of them in the media itself,” the comedian said, adding that a hijabi lawyer once featured in Auratnaak, an all-women stand-up comedy show in which Saleem also performed.

“She was the most well-received comedian of the night. Everyone loved her take on wearing the hijab in Pakistan and other aspects of her life (as a hijabi),” Saleem added.

Football team Captain Hajra’s take on the issue was that if a cricketer is not being asked to play in shorts, a footballer should not be either. However, she said whether a footballer on her team is wearing the head scarf or not has become a non-issue. “We don’t consider these things a problem a anymore,” she said, “They are as confident as we are.”

“It is just how Pakistani women portray themselves, no matter what industry they are in,” Hajra said. “Because this is the Islamic Republic of Pakistan, it’s like, how dare you wear shorts?”

On body-shaming of women:

When asked how Saleem is received as a female comedian in Pakistan, she pointed out that people focus on her looks instead of her comedy whereas her male contemporaries receive feedback based on their comic content.

Answering a question from the audience, Saleem said it is not just the middle-aged women that make comments entrenched in body-shaming but well-intentioned male relatives do that as well.

“They are people who have absolutely nothing to do with your life,” Saleem retorted, “… They’re so concerned with the way you look, the way you dress and the way you are.’

“An uncle once said to me, and my husband was around, and he goes: O Beta, I really hope that you’re trying to lose weight for your wedding.”

On cyber harassment and bullying:

“I have enough faith and confidence in myself that I [understand] that these are just 50 bored, faceless, nameless, good-for-nothing people … but again, I am older, I am in a stage in my life where I can think like this,” Mahira said, adding that even she is not immune to hateful comments.

“I could win an award and they’d drag me down for that,” she added. “I could go somewhere and wear sleeveless and [they would say] I’ll go to hell and take everyone who loves me to hell with me,” the star said. “My only advice to you will be: Just remember, these people do not exist. It’s not real.”

“Do not share your passwords with partners. Most of the times we receive calls [on cyber harassment helpline] saying that their account is hacked but we find out that it’s not hacked, it’s sharing your password, because it’s the key of trust in your relationship that’s how people get passwords of each other,” she said. “Your password belongs with you, not your partner.”

On religion and feminism coming together:

“I strongly feel that since centuries our religion, Quran and the Sunnah have been interpreted by men,” said Dad. “It’s us in society that decide what men will do and what women will do.”

Chiming in, Saleem said she does not “understand why the two (feminism and Islam) have to be mutually exclusive”.

“We have Hazrat Khadija’s example as well, who was the wife of Holy Prophet (pbuh). She was an entrepreneur, she was older than the Prophet (pbuh) and she proposed to the Prophet (pbuh) herself, so when we have a woman like that as a role model, I don’t understand why it is such a big deal for us to be speaking about equal rights.”