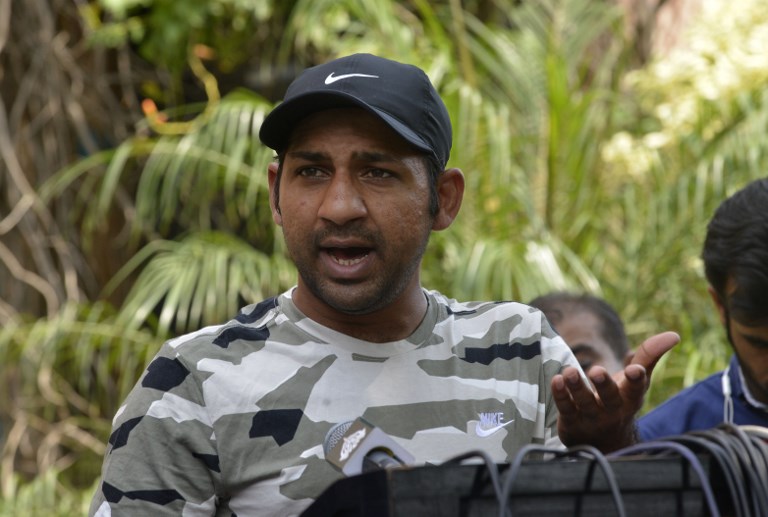 Pakistan cricket captain Sarfraz Ahmed gestures as he talks with the media in Lahore on September 10, 2018. PHOTO: AFP

On Thursday, Ahmed took to Twitter to apologise to “any one who may have taken offense from his expression of frustration which was unfortunately caught by the stump mic”.

1/2 – I wish to extend my sincere apologies to any person who may have taken offence from my expression of frustration which was unfortunately caught by the stump mic during yesterday's game against SA. My words were not directed towards anyone in particular and…

“My words were not directed towards anyone in particular,” he added. He was, however, standing behind the wicket, behind a player who happens to be black.

Ahmed went on to state that he did not even mean for his words to be heard or understood.

2/3 – I certainly had no intention of upsetting anyone. I did not even mean for my words to be heard, understood or communicated to the opposing team or the cricket fans. I have in the past and will continue in future to appreciate the camaraderie of my fellow cricketers from…

3/3 – …across the globe and will always respect and honour them on and off the field.

ICC Anti-Racism Code for Participant states that any player or support staff would deserve a punishment of four to eight suspension points if found guilty of the offense for first time, which can also be termed a four to eight ODI or T20I suspension.

It was feared that the episode might result in the green shirts’ losing their captain for the rest of the matches of the South Africa tour.

Yesterday, the Pakistan Cricket Board (PCB) also tweeted that it regretted the incident.  “The PCB expresses regret over the remark made by their captain Sarfaraz Ahmed and picked up by the stump mic during the second ODI against South Africa in Durban. The PCB neither endorses nor supports any comments that have the potential to cause offence, and firmly reiterates their zero-tolerance approach towards racist comments made; in whatever context,” it stated in a press statement.

“This incident has also highlighted the importance and significance of player education and training at all levels. The PCB endeavors to improve their player education programmes to ensure these types of incidents do not happen again,” said PCB in its statement.

PCB also added that it is confident that the incident will not affect the series, which has been played in great spirit with some excellent performances from both sides.

However, social media users were not buying Ahmed’s apology, with some saying that he was sorry for being caught as opposed to his offensive words.

The first thing I saw was Sarfraz Ahmed's 'apology' on his twitter handle. To be fair, it sounded like he was sorry that he was caught, but he wasn't sorry that he said inappropriate or racist comments.
Then I read what he said and the translation.

Apologise for your statement, not for others taking offence to it. It's like saying "Sorry if my slap hurt you". That's a non-apology.#SarfarazAhmed https://t.co/JSsnZLJ1kE

Everyone in Pakistan calls black people 'kaalay'. Some do it to bully, disrespect, and/or because they don't know exactly what to call them.
It's important that we learn and educate ourselves about racism in our culture rather than just put it one person.#Pakistan #SarfarazAhmed