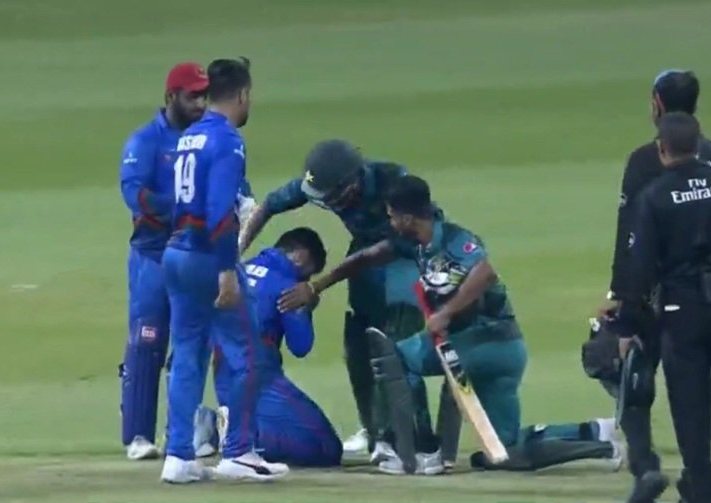 KARACHI: Pakistani Twitter was exploding with Shoaib Malik tweets during the match between Pakistan and Afghanistan for the Asia Cup 2018 currently being held in Abu Dhabi and Dubai. Pakistanis were on the edge of their seats during the nail-biting end of the match in which Pakistan was required to make ten runs in one over and Malik was able to play a six and a boundary.

But there was another reason to celebrate. At the end of the match, Afghan bowler Aftab Alam broke down after losing to Pakistan. Instead of celebrating his win, Malik chose to go over to Alam to console him.

Terrific gesture by the legend @realshoaibmalik – went to hug Aftab who was very emotional & crying. The Freddie-Lee moment relived. pic.twitter.com/0eBC0ZNszf

What a class act, Shoaib Malik.

Showing such heart after a tough competition, lifting up a devastated young opponent. https://t.co/EyTue56rLJ

What a fine gesture by Shoaib Malik to go and console crying Aftab Alam. There is lot of political tension between two countries but humanity at its best. Shoaib Malik, you super human! #PAKvAFG

A picture is worth a thousand words.
Afghanistan fought valiantly but couldn't win. However they've already won a lot of hearts.
So graceful from Shoaib Malik to first console Aftab Alam (who bowled the final over)
He then put his arm around the emotional Rashid Khan.#PAKvAFG pic.twitter.com/NBTgII9TIB

Shoaib Malik is hero of Pakistan tonight he saved Pakistan from defeat in last over and embraced Afghan players after his winning shot he behaved like an elder brother anyhow well played Afghanistan pic.twitter.com/9wK30LzU8X

What are your thoughts?