Who is Priyanka Gandhi and why is she trending worldwide?

Part of India’s biggest political family, Priyanka has announced to launch a political career just months ahead of polls. Will this be a game changer? 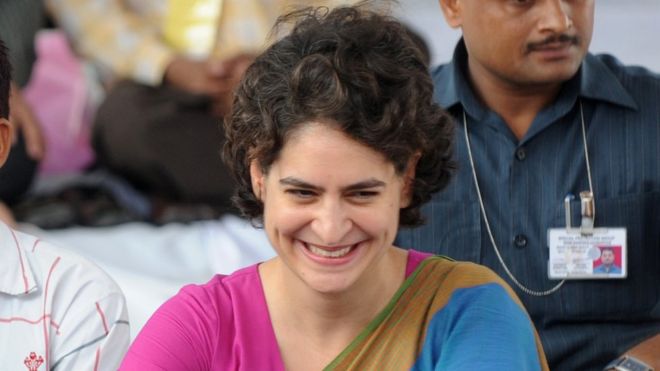 KARACHI: The name Priyanka Gandhi had been trending worldwide at the top spot all day on Twitter. Those who are familiar with regional politics will know of her and her family. But for those who don’t, here’s quick roundup of who she is and why she’s making headlines.

Who is Priyanka Gandhi?

Despite the last surname, she is not related to the Gandhi but in fact Jawaharlal Nehru, the first leader of India. Her father Rajiv was the son of Indira Gandhi, Nehru’s daughter and the first and, to day, only female prime minister of India.

Priyanka is a mother of two, and is married to businessman Robert Vadra, according to CNN.

Why is she trending?

On Wednesday (today), 47-year-old Priyanka formerly launched a political career, taking on the role of  Congress’s general secretary in charge of eastern part of Uttar Pradesh.

This is the first time that Priyanka is entering active politics. She has previously campaigned for her brother, Rahul, and mother, Sonia, according to Times of India.

What does this mean for Congress?

Political commentators are regarding the appointment as a strategic move by Congress ahead of elections in India, scheduled for May 2019. “I have not sent Priyanka and Jyodiraditya for just two months. I have sent them to take Congress’s ideology forward in Uttar Pradesh. Our ideology of standing and fighting for the poor, for the youth, for the farmers…There will be new thinking, new ideology in Uttar Pradesh,” said Rahul Gandhi, NDTV reported.

Read:What went wrong? A timeline of Pakistan and India’s latest war of words

With this new development, it is being said that Priyanka has long been making “guest appearances” in election campaigns and rallies and it is high time she actively took part in it, given the weakening of Congress over the years.

While her brother, Rahul Gandhi, is known for his reluctance and indecisiveness, Priyanka has not been very demonstrative. “She has been confining her role in politics to the constituencies of her brother and mother Sonia Gandhi — Amethi and Raebareli — so far,” according to NDTV.

Congress lost to Prime Minister Narendra Modi’s Bharatia Janata Party (BJP) in the last general election 2014 and has since found it difficult to get back in the game. Experts are of the opinion that Priyanka’s qualification for  UP (East) is a direct challenge to PM Modi in Varanasi for the upcoming election.

Priyanka has often been compared to her dynamic grandmother Indira Gandhi. “Political observers believe Priyanka is blessed with the same electrifying personality — graceful and extremely engaging — often seen draped in similar cotton sarees and a fuss-free bob haircut,” according to an article on India Today.

Read:The political contributions and sacrifices of our First Ladies

Whether this has been sheer tact on her part and a display of little over more, the next few months are being rendered crucial for Congress. Some people are saying that it is a direct, upfront challenge BJP; others are already rendering her as incapable as her brother.

How are people reacting?

Congratulations and resentment alike started outpouring on Twitter as soon as news of her appointment broke:

The headline on #PriyankaGandhi misses the mark if it doesn't underline UP East, where she will run the party campaign- stronghold of PM Modi in varanasi and CM Yogi in Gorakhpur. This is a risky but bold frontal challenge and the Congress making a big statement

#PriyankaGandhiVadra is like 29th February. She appears once in 4 years…😂😂

Wait until #PriyankaGandhiVadra starts speaking ..she is highly overrated and won’t disappoint in proving that she is sister of Rahul.

#PriyankaGandhi 's Entry is proof that Congress realises @RahulGandhi is not being accepted and will not be accepted by Mahagathbandhan parties as PM candidate/Face. So Priyanka seems to be the last option for Gandhi Family to try and Keep Power in the Family.