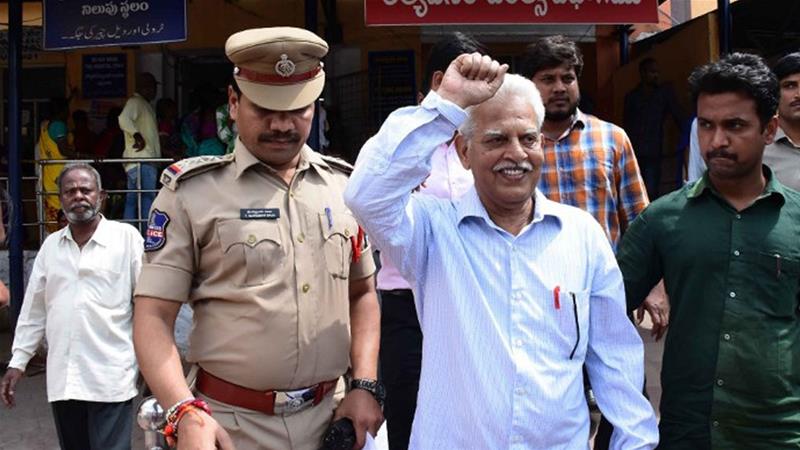 Photo: Indian poet and activist Varavara Rao gestures as he is escorted by policemen in Hyderabad (AFP)

KARACHI: In what is being perceived as an attack on freedom of speech, five prominent left-wing political activists were arrested by Indian police for suspected links to banned Maoist rebels on Tuesday. These arrests sparked outrage from human right groups who condemned these police raids as “massive crackdown” on government critics, Al Jazeera reported.

Which activists have been arrested?

Sudha Bharadwaj, Gautam Navlakha, Varavara Rao, Vernon Gonsalves and Arun Ferreira were among those arrested. According to BBC, they were picked up from their residences in different Indian cities and the homes of other leftist lawyers and scholars were also raided as part of the same investigation.

Bharadwaj, 56, is a trade unionist and law professor who has been fighting for the rights of tribal people for over 30 years. Rao, 78, is a communist, poet and Maoist ideologue, Navlakha is a civil liberties activist while Gonsalves and Ferreira are both lawyers.

Read: Everything you need to know about what’s happening in Bangladesh

Why have they been arrested?

“These persons have been arrested for their Maoist links,” Joint Commissioner of Pune Police Shivaji Bodakhe told AFP. The Indian government regards Maoist rebels, who are active in several states, as the country’s biggest internal security threat.

Their arrests were also carried out in connection to a public rally held in Pune city, in the western state of Maharashtra, on December 31, 2017, by lower-caste Dalits to commemorate the historic battle against caste oppression. After the rally, clashes broke out between Dalits and right-wing groups who opposed the celebrations, resulting in one casualty. When the police probed the rally’s organisers, they ended up arresting five other activists – Surendra Gadling, Shoma Sen, Rona Wilson, Mahesh Raut and Sudhir Dhawale – in June 2018. Following the same lead, the police recovered emails and other documents which resulted in the latest round of arrests and raids.

What are people saying?

Many have expressed disapproval over the ways in which the case is being handled including Booker-prize winning author Arundhati Roy, who is an outspoken critic of Indian Prime Minister Narendra Modi. She stated that these “ludicrous charges” were an attempt to muzzle freedom ahead of next year’s polls, as reported by Al Jazeera.

Furthermore, on Wednesday, filmmaker Vivek Agnihotri put out a tweet asking some “bright young people” to make a list of those defending #UrbanNaxals.

I want some bright young people to make a list of all those who are defending #UrbanNaxals Let’s see where it leads. If you want to volunteer with commitment, pl DM me. @squintneon would you like to take the lead?

There is apparently no definition of “urban naxal” and seems to be a term coined by Agnihotri himself who also authored the book Urban Naxals: The Making of Buddha in a Traffic Jam. The term has since been used to refer to people who are critics of Modi’s government and his political party, Bharatiya Janata Party (BJP). His tweet caused quite the stir but not the desired effect. Instead, some 50,000 Indians replied with mocking tweets and volunteered to be on his list. Soon, the hashtag #MeTooUrbanNaxal began trending on Twitter, BBC reported.

If @Sudhabharadwaj is a naxal, I am a naxal too. Arrest me. #MetooUrbanNaxal

I think. I debate. I read. I question. I dissent. I criticise. I emphatise. I protest. I probe. I exist. #MeTooUrbanNaxal

Maoism is a political theory that derives its teachings from the communist doctrines of Chinese political leader Mao Zedong.

What are the activists exactly being charged with?

Although no charges have been filed yet, according to BBC, the police have said the activists were arrested based on “incriminating evidence” of their “elaborate communication” with members of the armed banned Communist Party of India (Maoist) (CPIM). They have also stated that the evidence suggests the accused have shown “intolerance to present political system (in India)” and provided funds to “radicalise youth and students” and empowering them to take part in “unlawful activities”.

What are the arrested activists saying?

Defending himself, Ferreira said there was no need for them to have been arrested as he and the others were more than willing to cooperate with the police when their houses were raided. Their lawyers have also accused the police for fabricating stories as even the high court has clarified that merely being a member of a banned organisation does not amount to an offence, reported BBC.