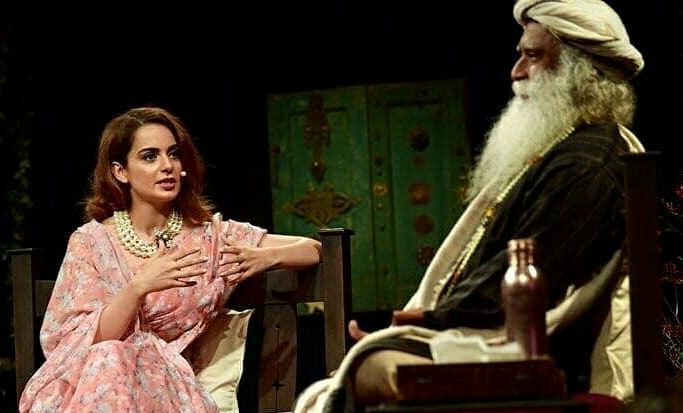 KARACHI: Kangana Ranaut is no stranger to controversy. When she called out nepotism and privilege in Bollywood on Karan Johar’s show Koffee With Karan, she made news around the world. When she produced a song about sexism in Bollywood with All-India-Bakchod, she was in the news yet again. But recently, her whole ‘woke’ aura has sort of gone down the drain. In a conversation with Isha Foundation leader Jaggi Vasudev, popularly known as Sadhguru, on something called ‘In Conversation With Mystic,’ Ranaut managed to somehow justify lynching and disappointed quite a lot of fans in the process.

Earlier forgotten celebs made comebacks thru films. Now they make comebacks thru bigoted remarks. Sonu Nigam got 15 min of comeback thru anti-azaan tweet. Last big film of #KanganaRanaut was in 2015. Few unknown films later & to sell her latest,she uses bigotry to make a comeback

Just because you see criminal things happening in your village doesn't make it normal #KanganaRanaut. You just tried to normalize mob lynching. This shows how ignorant people like you are. #KanganaMeetsSadhguru
Subscribe to nationalism MY ARSH!!!

Hey Kangana Ranaut and @SadhguruJV , You don't have to go lynching to save cows.
There are several cows dying of suffocation, starvation and food poisoning inside Gaushalas. Please save them.

Here’s how it happened: during their discussion, the duo began to speak about how beating someone up (read: lynching) over killing of cows is just ‘something’ that happens in villages.

Vasudev said: “(In villages) How many thousand head of cattle you owned decided how rich you are. So if somebody stole a cow, they caught you and beat you up. Alright?”

To this Ranaut said: “Yeah, that’s how it is back home, as well. I come from a village, and sometimes the only thing they have….”

(At this point, Varsudev cut Ranaut off and continued)

“This whole lynching debate going on in the country, these people who are talking about it, have not seen India,” he said.

Not only did their conversation tilt towards normalising mob lynching but also justified it. So as to say that if that’s the only thing villagers have then it is okay and justified for them to go on to kill the person who stole their cow.

Moreover, as their discussion went on, Ranaut and Vasudev also called liberals a bunch of ‘fanatics,’ who are trying to break the already ‘vulnerable’ country into a civil war.

After this interview went viral and they were both effectively slammed for normalising mob violence and lynching, Ranaut in an interview with Mid-Day said: “We didn’t normalise lynching at any point. If a certain religion worships cows, you can’t slaughter cows. I am vegan and I can’t see raw meat. I can’t be shamed for my choices. If it’s a sentimental thing, why instigate people?”

We just have one question from the Simran star though: is it okay to kill people over sentimental things?