In case you struggled to keep up, here's a timeline on the fallout from the verdict 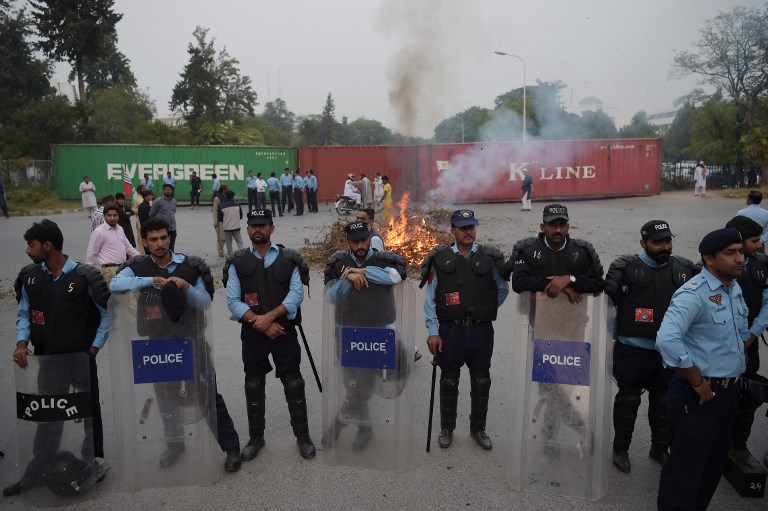 KARACHI: In case you struggled to keep up with all the developments, we made a timeline to make it easier to follow up with the fallout from Aasia Bibi’s verdict.A lot has happened since the Supreme Court’s landmark decision to acquit a Christian woman who was accused of blasphemy.

The country stood paralysed as protesters took to the streets, and the government scrambled to get things in order.

The Supreme Court of Pakistan acquitted Aasia Bibi, who was charged of blasphemy in 2010, and had been incarcerated since. In a strongly-worded verdict, shared and quotes widely on social media, the SC’s three-judge bench acquitted Aasia, giving her “the benefit of doubt” owing to inconsistent witness accounts, a delay in the registration of the FIR, Aasia’s own account, among other reasons.

The court also highlighted how while blasphemy is a serious offence, the blasphemy law is often misused and gave the example of Mashal Khan, a student who was lynched by a mob following false accusations of blasphemy.

In his concluding notes, Justice Khosa stated that the women who accused Asia of blasphemy could be held guilty of the same for insulting the appellant’s religion.

The verdict was welcomed by many, who applauded the courage of the judges, lawyers and activists who had been fighting Aasia’s case. But they might have been in a minority.

Asia Bibi, a Christian mother of 5 in Pakistan, was for years on death row for blasphemy. Now the top court acquitted her, and Islamists are protesting with violent threats. Will Pakistan—a member of the UN Human Rights Council—protect Asia Bibi when she's released? pic.twitter.com/LR7rX4gkfJ

Asia Bibi has been cleared of blasphemy charges. She has been acquitted by Supreme Court.

Soon after the verdict was announced, supporters of the extreme right-wing Tehreek-e-Labbaik Pakistan (TLP) took to the streets and staged protests in major thoroughfares all over the country. During these protests, the TLP leadership demanded putting Aasia name’s on the Exit-Control-List (ECL) and reopening the case. They also encouraged and incited violence, naming the three judges involved in the case as targets. And this is us putting it lightly.

Later in the day, Prime Minister Imran Khan addressed the nation through a televised presser, calling on everyone to stand with the court’s decision and cautioning the protesters of due course of action “if they dared clash with the state”.

“If you continue doing this … let me make it clear to you … the state will fulfill its duty (and) protect people’s properties and lives. We will not allow any vandalism (or) blockage of traffic. I appeal to you, do not take the state to a point where it has no option but to take action,” Khan said.

Khan managed to win over even his harshest critics with his to-the-point and stern warning.

Basically, it seemed like Pakistan’s watershed moment in finally standing up to religious extremists had arrived.

– Protests continue for the second day

The day after, protests seemed to grow stronger and louder as the government refused to meet their demands. Reports showed that the country had some to a standstill. Businesses were closed off, roads blocked, schools and colleges remained closed and traffic jammed as stick-wielding protesters took to the streets to set vehicles on fire, vandalise property and disrupt lives.

Please retweet and show the real face of TLP.#ArrestKhadimFasadi pic.twitter.com/KAgA4lTtUq

– PM leaves for China on an official visit

Despite the unrest, the prime minister left a scheduled official visit to China. According to Radio Pakistan, he was accompanied by a high-level delegation including Minister for Foreign Affairs Shah Mehmood Qureshi and Finance Minister Asad Umar.

– First round of talks between state and TLP fails

Reports began to pour in that the government had tried to hold talks with the protesting party. TLP leader Khadim Hussain Rizvi announced via his Twitter account (which is verified and still functional, BTW) that the first round of talks had failed to yield any result and called for a nationwide strike on November 3, Friday. He also asked his supporters to brace themselves for embrace martyrdom, according to Pakistan Today.

TLP almost destroyed the @Audi showroom in #Karachi. The security guards safed the showroom. #Pakistan is being held hostage by these goons. #AasiaBibi pic.twitter.com/JBXk4tsWse

– Info minister says govt will not resort to brutality

Information Minister Fawad Chaudry announced that the government will not take any action against the TLP as the protests entered the third day. He said the state would not resort to brutality and that the government would try negotiating with the TLP leadership, as protesters raged on in the streets.

In the middle of the chaos and turmoil, news broke of former Senator Maulana Samiul Haq’s assassination. Founder of his own Jamait-e-Ulma-e-Islam (JUI)-Sami faction, the cleric was stabbed to death by two unidentified men inside his house in Rawalpindi. While the motive is yet to be determined, the news did instill fear among many that things could escalate and get worse.

– TLP calls off protests after reaching an agreement with government

Later in the day, it was revealed after many back-and-forths that the government has reached an agreement with the TLP and a copy of the 5-point agreement was circulated on social media.

The leadership of TLP called of their nationwide protests after the state met their demands, which are:

1. The government will not object to a review petition filed against the Aasia Bibi verdict

2. The government will immediately initiate a legal process to put Aasia Bibi’s name on the Exit Control List (ECL)

3. The government will initiate legal action against those who were allegedly killed or injured during the protest

4. The government will release all those arrested during the protests

5. TLP offers an apology to anyone who faced problems during the protest

Opinions remains divided on the issue. Following are some reaction tweets:

I'd like to go back and delete some old tweets but I'll leavd them out there so they can serve as reminders to myself.

I heard a man say what I wanted to hear and ignored what I knew.

People read the agreement. There is no surrender here. 1. Review is a constitutional right. Won’t be accepted. Read grounds of review. 2. Initiating legal proceedings means nothing at all. No ECL here. MoI is not going to fold. Rest is useless. Mullahs have been defeated. https://t.co/jODWAi3uxw

No action has yet been taken against the leaders who fanned the flames and called for blood.