Members of Christian community say they're overjoyed but still fearful 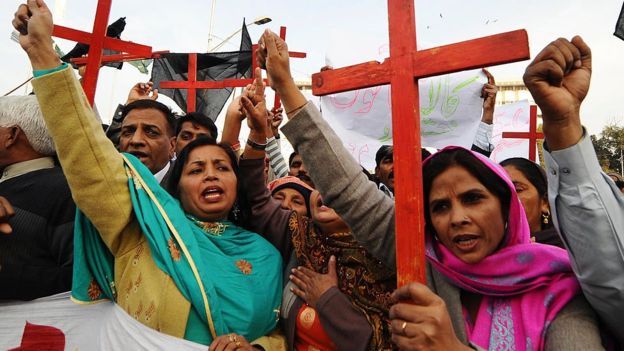 KARACHI: Razia fell to her knees and cried when she heard the news of Aasia Bibi’s acquittal. “Thank you, Jesus Christ!” she proclaimed as she lifted her hands in prayer.

A resident of Karachi’s Drigh Road area, Razia is part of a prayer group that met regularly to pray for Aasia Bibi’s acquittal. “All members of the prayer group couldn’t sleep last night,” she shares, her hands still clasped together in gratitude. “So we decided to meet and pray because that’s the only thing we could think of doing. What else could we have done?,” she said in an interview with Cutacut.

Aasia bibi, a Christian woman, who has been on death row since November 2010 after she was convicted on charges of committing blasphemy during an argument with two Muslim women in Punjab, was been acquitted by the Supreme Court of Pakistan in a landmark ruling earlier today.

But hers isn’t the first case and unfortunately won’t be the last, courtesy of Section 295 of Pakistan’s Penal Code, better known as the Blasphemy Law. By 2010, an estimated 1,274 people had been charged under the blasphemy laws, as reported by Dawn.

“I still remember when an 11-year-old boy, Salaam Masih, was accused alongside Manzoor Masih, 38, and Rehmat Masih, 44. The whole community kept a fast before their verdict,” recalled Razia.

In 1993, the aforementioned were accused of writing blasphemous remarks on a mosque’s wall. Even though Salamat’s mother said he did not know how to read. Yet, they were tried and put on death row while one of them was gunned down in an extrajudicial killing. However, they were acquitted by the Lahore High Court in 1995. As a result, a country-wide strike was orchestrated by Milli Yakjehti Council.

Not much has changed since then. Immediately after the verdict was announced, fear encompassed the country and protests ensued.

“We are all happy and thankful, but also scared,” says Thomas, who works as a private driver in Karachi’s Defence Housing Authority. “I am rushing back home as the situation of the city is unpredictable and we’re all targets,” he says.

Aasia Bibi’s case, which was heard by a three-member bench headed by the Chief Justice of Pakistan, was high-profile, receiving media and international attention. In 2011, late governor of Punjab Salmaan Taseer was assassinated by his own bodyguard Mumtaz Qadri for speaking in favour of the accused in a televised interview. The said bodyguard was executed by hanging during the PML-N’s tenure. Late minister for minorities affairs Shahbaz Bhatti, a Christian himself, was also assassinated for showing support for Aasia Bibi.

Watch: The white in our flag

Speaking of her reaction to the verdict, Pastor Ghazala Shafique, also a human rights activist, maintained that she was overwhelmed and thankful to God, the ruling government and Chief Justice Saqib Nisar. “This is one giant step in the right direction but we, as a nation, still have a long way to go,” she said. “My question is: who will repay the nine years she lost? Justice should be served in the right way. It shouldn’t be delayed or prolonged,” she continued. “This delay brings fear and unrest in society. The fact that even in the face of overwhelming evidence, it took almost a decade for justice to prevail and so many lives were lost in the process”. According to Pastor Shafique, while today is a day of joy, we must also not forget the sacrifice of those martyrs.

Fellow Christian and human rights activist Safina Javed also said that the ruling is indeed a historic one. “Justice was delayed but not denied,” said Javed. While thanking the Supreme Court of Pakistan, she expressed great pleasure over the fact that her country chose to stand on the “right side of history”.

Nonetheless, church leaders chose to remain silent on the verdict citing personal safety as a reason.

Some names have been changed to protect identity