While lashing out at MQM, Sohair Anwar Siyal said Sindhis are the ones who have been raising those who migrated from India 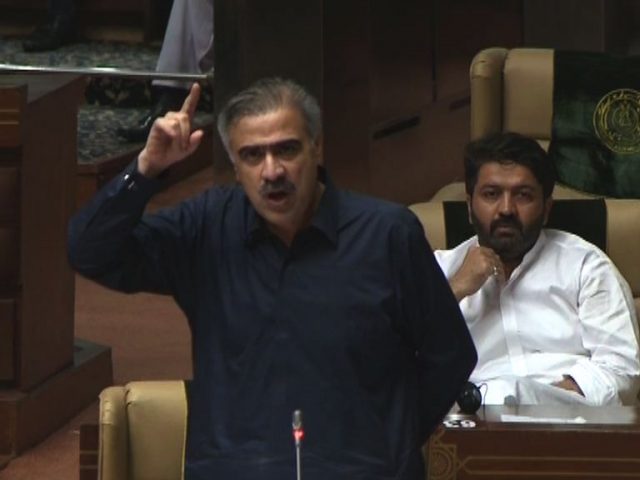 KARACHI: A Pakistan Peoples Party (PPP) leader caused outrage when he delivered a fiery speech against the Muttahida Qaumi Movement-Pakistan (MQM-P) in the Sindh Assembly on Thursday. Many accused him of discriminating against the Urdu Speaking community and being inflammatory and misogynistic in his speech.

“Sindh has been rearing those who migrated from India. We’re the ones who supported them, opened our homes and hearts to them and gave them our land. They should first consider themselves Sindhis then ask for their rights,” Sohair Anwar Siyal said as saying in the assembly, in response to a comment by an MQM leader who said that Karachi supports Sindh. He also added, “Do they think Sindhis wear bangles?”. “Wearing bangles” is a figure of speech used to describe a person who is ‘weak’ because he wears bangles ‘like a woman’.

This caused social media to erupt, with many calling out  the PPP leader. Members of his own party also distanced themselves from his comments, with PPP leader Saeed Ghani taking to Twitter to disagree with Siyal’s comments.

I don't agree what Sohail Siyal said in Assembly but also listen what Muhammad Husain of MQM said about people living in interior is Sindh. Siyal responding M Husain but not properly. https://t.co/z4nbhK9EG2

My dear President of Pakistan 🇵🇰 @ArifAlvi & Governor Sindh @ImranIsmailPTI just wanted to let you know that PPP’s Sohail Anwar Siyal disrespect our community. Being a Pakistani and a part of this community you should condemn this and take necessary actions against hate speech

I demand to remove Sohail Anwar Sial from the Parliament and Pakistan Peoples Party!

I grew up with Sindhi & Baloch people. My friendships till this very day are with them. I have never seen an ounce of prejudice in my entire life from them.

I doubt that this Sohail Anwar Siyal is a Sindhi. Sindhis have decency & hospitality.

PLEASE GET HIS DNA TEST DONE.

Karachi – The financial capital of Pakistan, who single handedly plays a huge part in the economy and a major chunk of taxes has the same 'bharat se anay walay' in majority.
While you anghoota-chap are busy having honey and olive oil in liquor bottles.#سہیل_سیال_کو_برطرف_کرو

After the backlash, Siyal said he was not against the community and that his comments were directed against a certain mentality.

“I didn’t say anything against Urdu-speaking people,” he said, according to Samaa TV. “Everyone living in Sindh and Pakistan is our brother.”