Confused about why Nawaz Sharif is being released? We break it down 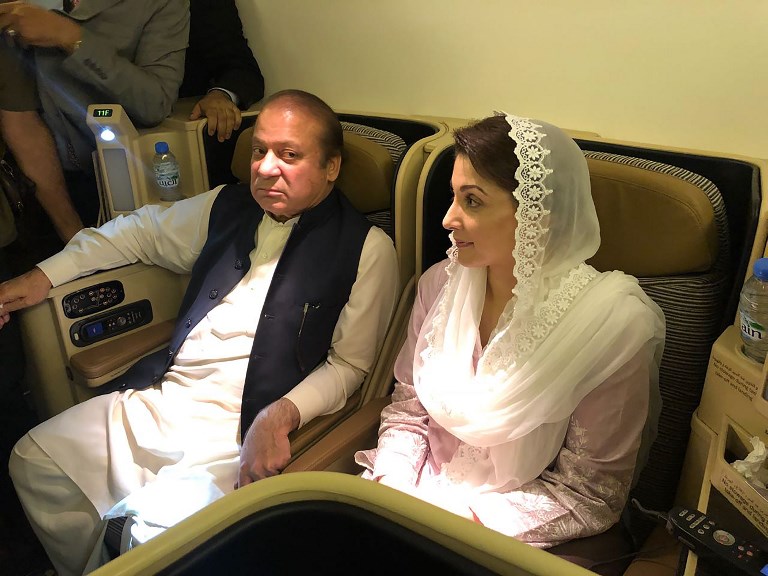 Former prime minister Nawaz Sharif and his daughter Maryam Nawaz siting on a plane after their arrival in Lahore. PHOTO: AFP

KARACHI: The Islamabad High Court has suspended the sentences served to former prime minister Nawaz Sharif, his daughter and party member Maryam Nawaz, and her husband Mohammad Safdar. IHC judges have ruled that the sentences will remain suspended until a final verdict is reached on the appeals made by the family on the Avenfield verdict.

Confused about what all of that means? Here’s a breakdown of what’s happened so far:

-On July 6, an accountability court sentenced the former premier and his daughter to 10 years and 7 years imprisonment, respectively. The reason: there are assets (i.e. Avenfield properties) that belong to the Sharif family that cannot be accounted for by their ‘known’ income.

-The three of them were unable to contest the general elections, and were sent to Adiala Jail.

-On July 16, the three convicted members of the Sharif family filed appeal against their verdict in the Islamabad High Court.

-On September 19th, their sentences were suspended until a final verdict could be reached on their appeals.

Speaking to Cutacut, lawyer Moiz Jaferii said it is important to note that none of the initial sentences have been suspended, and so the charges against the three members of the Sharif family haven’t dropped. The IHC judges have merely decided that there is enough reasonable doubt in the initial Avenfield verdict, for Nawaz, Maryam, and Safdar’s liberty to be warranted as a right. This reasonable doubt exists because a direct link hasn’t been proven between Nawaz Sharif and the ownership of the Avenfield properties.

And so, Sharif, Maryam and Safdar will soon be released from Adiala Jail on a bail of Rs0.5 million, according to reports.

Stay tuned with us to breakdown the story as it unfolds.