'Dream Crazy' is an instance of a corporation greatly benefiting from a struggle and a cause, without doing the labor or bearing the cost of its activism 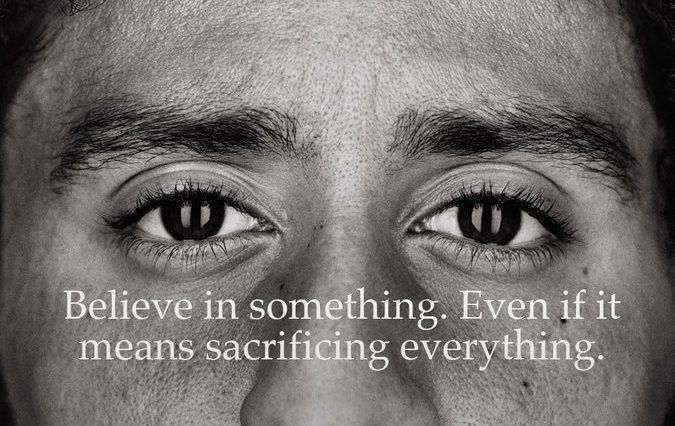 KARACHI: Nike has finally dropped the marketing campaign linked to the 30 year anniversary of its successful tagline ‘Just Do It’, and the controversial hashtag trending on social media –#NikeBoycott. The two-minute video, narrated by divisive sports figure Colin Kaepernick, has been cause for some Nike shoe burning, even Adidas shoe buying, and general right-wing outrage.

Kaepernick came under fire for kneeling instead of standing for the United States national anthem before a National Football League pre-season game in 2016. Right wing nationalists in the United States accused Kaepernick of disrespecting the flag, but perhaps the real discomfort and rage was rooted in the fact that Kaepernick’s decision to kneel was to protest racial injustice. Cut to 2018, and Kaepernick – accused of being ‘un-American’ by the president of the US himself – is the face of Nike.

Nike decided on Kaepernick despite the fact that he hasn’t played for an NFL team since 2016, and will be taking them to trial, for colluding to not hire him and let him play, later this year. The promotional posters leading up to the release of the video featured Kaepernick’s face with the words: “Believe in something. Even if it means sacrificing everything,” insinuating that something heavily political was to follow. However, the video, titled ‘Dream Crazy’, doesn’t appear to take a stance on racial injustice, or anything divisive or politically inclined for that matter. It showcases successful athletes pushing boundaries and limits, daring to ‘Dream Crazy’.

The controversy provoked by the poster is not substantiated by a video that is inspirational, and aesthetically pleasing, but ultimately generic. However, the poster is indicative of a risk taken by a mainstream brand – Nike took a chance on an unemployed sportsman and cashed out on his activism. Although social media is abuzz with a hashtag encouraging users to boycott Nike, it is also being reported that Nike has already managed to generate over $163.5 million in media coverage since they released the promotional materials on social media, according to Apex Marketing. ‘Woke-ness’ sells.

Nike made a calculated decision, and a lot of news. And while their backing of Kaepernick is a win against a football league he will be heavily featured in, despite being systemically left out – it is also an instance of a corporation greatly benefiting from a struggle and a cause, without doing the labor or bearing the cost of its activism. Social justice sells, and Nike might’ve made a few shoe-burning enemies overnight, but it has ultimately made an investment with long term gain and profit.

Read: It is now legal to be gay in India

It is important to be discerning consumers of corporate content that appears progressive. No matter how progressive ‘Dream Crazy’ may appear to be, it is produced, backed and used as a profit generating tool by a corporation that, in the case of Nike, has been repeatedly accused of abusing and exploiting its workers globally – this includes slave wages, forced overtime, horrible working conditions and verbal and physical abuse.

The practice of using ‘woke-ness’ and social justice to market products that have been unethically produced at the cost of worker exploitation is not just limited to Nike – we’ve also been witness to it in Pakistan. Khaadi, a popular clothing brand, notorious for worker exploitation and mistreatment, released an Independence Day video celebrating minorities in 2017. It was reported in The Express Tribune that in 2017, Khaadi was not paying it’s workers minimum wages or even providing them with clean drinking water. Workers were allowed two bathroom breaks in a day, and the unit that housed them had only three functioning bathrooms, and one functioning washbasin for 1,500 workers – claims that were denied by the retail giant. The Independence Day video dropped two months after the story of Khaadi’s inhumane worker treatment broke. The video celebrates religious and ethnic minorities across Pakistan, and while that’s great to see, it is an instance of a corporation exploiting a struggle and a cause to market goods that have been produced through an exploitation of workers.

Corporations using progressive ideas for branding is a reality that is ultimately indicative of a paradigm shift: ‘woke-ness’ sells because an increasing number of people identify with it. That, however, may be the only positive takeaway worth celebrating about corporate advertisements that use social justice to make money.

‘It’s only crazy until you do it’: Nike’s newest ad is an empowering tribute to female athletes