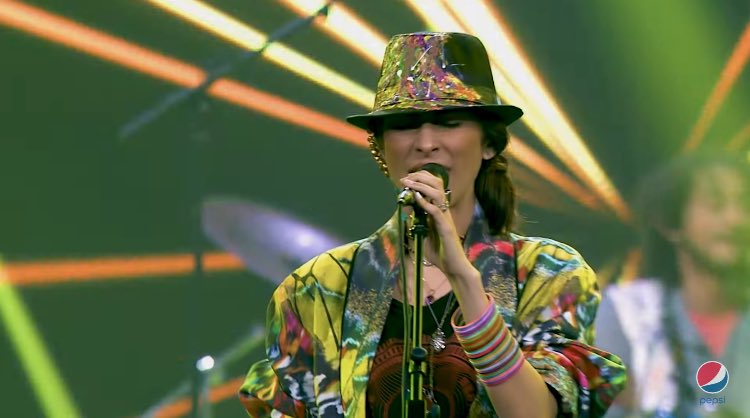 KARACHI: If we were to make a list of some of the strongest Pakistani women, Meesha Shafi would definitely be on it. Since April this year, Shafi has been in the headlines because she decided to name and shame a man who sexually harassed her on more than one occasion. Now, in a perfect world, it would’ve been the accused Ali Zafar who’d be in the news and at the receiving end of hate but since we live in a man’s world, all these things were directed at Shafi instead of Zafar. In the process, Shafi had to restrict her public appearances while Zafar went on to promote his film Teefa In Trouble. It wasn’t until recently that Shafi came in the limelight again with Pepsi Battle of The Bands.

And it wasn’t until episode six of Pepsi Battle of the Bands latest season that we found ourselves completely in awe of Shafi all over again. Meesha chose to sing Madam Noor Jahan’s Koi Sarda Aye Te Sare which can loosely be translated to ‘haters gonna hate’.

We don’t think her choice of song for this performance was a coincidence. It seems deliberate; a well thought out slap in the face for all haters out there. Also 10/10 for the eye-catching artwork created by Shehzil Malik which was displayed behind Shafi while she performed.

A closer look at this delicious illustration by @shehzilm exclusively painted for lucky me! 🤩🙏🏼

Read: How to be a good feminist ally

Oh and it’s not just us, others can’t help but go gaga over her performance either.

Look at Meesha Shafi performing. What a star! #PepsiBattleoftheBands pic.twitter.com/PFUwBtzeRb

Oh My God, did you just realise that Noor Jahan said it way before that “Haters gonna hate”. I just realised!!! Listen to @itsmeeshashafi performing this epic song!! #PepsiBattleOfTheBands pic.twitter.com/tiSwAykEnq

I AM IN LOVE WITH MEESHA’s song. Rendition of Noor jehan’s song ‘ koi sarda ay tey saray ‘
Listen to this song and you’d think that this is the attitude you need to adopt when you see people interfering in your life fazul men 😛#PepsiBattleoftheBandshttps://t.co/pMZGj2ZIAz

It doesn’t get more badass than this, does it?