Was Jibran Nasir a victim of police brutality or a political opportunist? 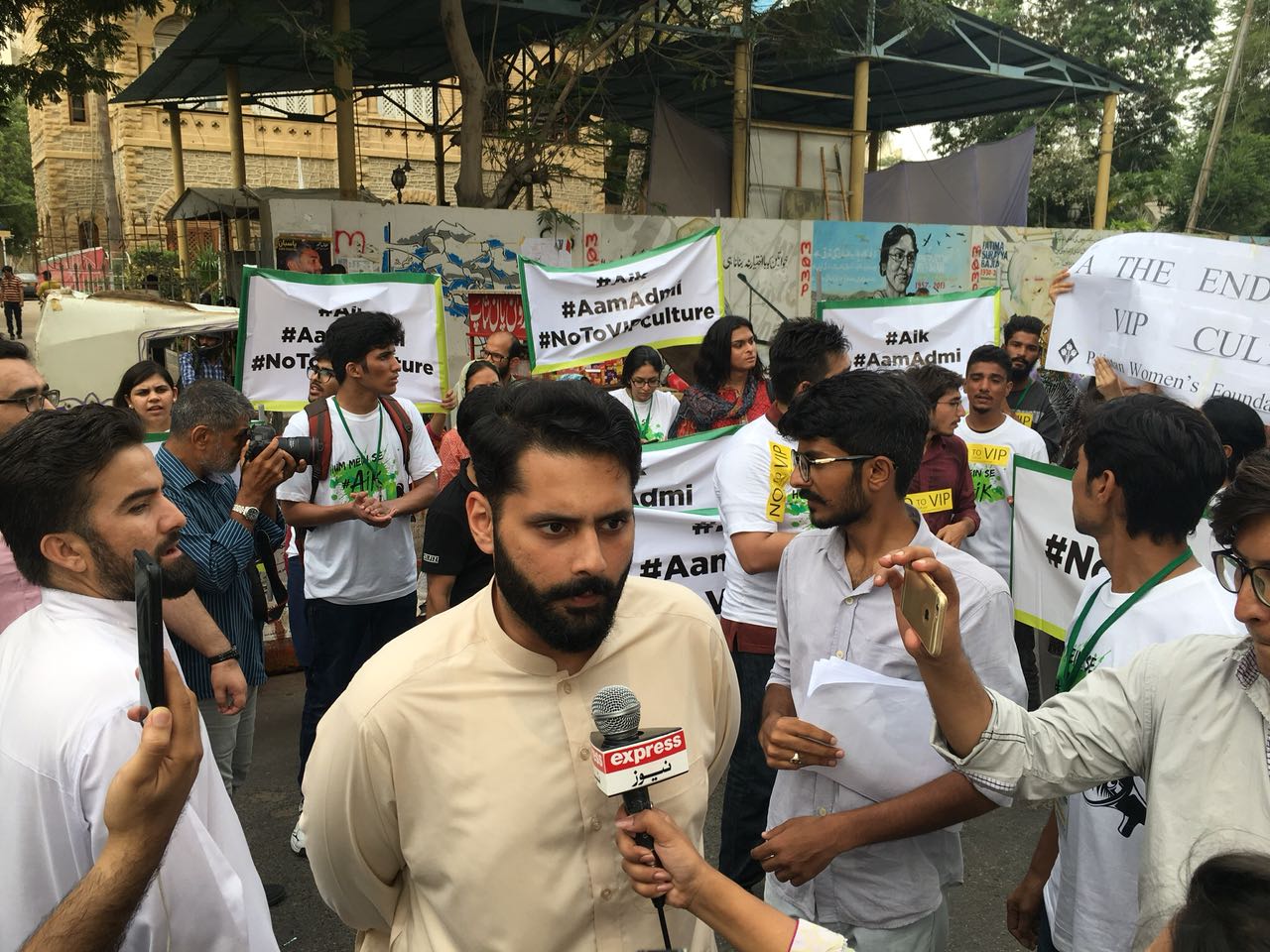 Jibran Nasir at the protyest organised against VIP culture a day after the incident. PHOTO: FAWAD HASAN

KARACHI: It’s been two days since election hopeful Jibran Nasir was involved in an incident of police highhandedness in Karachi and the widespread movement on social media and on ground that the incident evoked has yet to recede.

The civil rights activist who is also contesting elections from NA-247 alleged on Monday that he was roughed up and thrashed by policemen who were giving security protocol to a judge.

He also claimed that he was arrested and detained at the Frere Police Station. Jibran filmed himself being taken away and while at the police station, causing uproar on social media.

Many took to Twitter to condemn the incident using the hash tag #FreeJibran ad some of his supporters reached the police station to get him released.

His claims were proven by a medico-legal report that confirmed that was in fact roughed up with bruises on face and chest, The Express Tribune reported.

The police haven’t denied the physical altercation and have instead defended their right to do so, arguing that Jibran was at fault and was duly reprimanded for ‘overtaking the judge’s car’.

SSP South Omer Shahid Hamid, also an acclaimed novelist, said the amount of force used in this case was justified given the fact that the police party was giving protocol to a high court judge.

“The judge’s squad overtook Jibran’s car which made him upset. He then followed the protocol and once ahead it, blocked its way,” Shahid said while speaking to Cutacut. “This would be classified as an incident of road rage anywhere in the world,” he argued.

“Jibran must have managed to gain 500-1000 votes after this incident. This was part of his electioneering,” he said while adding that it is the code of conduct of the election commission that once you have become a candidate, anything you do afterwards in public is part of your election campaign.

The SSP added that since the policemen did not know Jibran, they had to check his identity. “He could have just shot the video and posted it to raise his voice against the protocol but he blocked the judge’a car and threatened the policemen who then had to take a step,” Shahid said.

Jibran was told that it was the Sindh High Court’s chief justice convoy but he insisted on speaking to the judge, the SSP said.

“The judge recognised him and told the policemen to let him go but Jibran was enraged and asked the squad to arrest him,” Omer said.

The activist was never arrested or detained, said the police.

“Jibran was brought in by the policemen who were given protocol to the judge because he forced them to do so,” said Frere Police Station SHO Rana Latif. “He is an advocate and should have given way to the judge’s squad. The judge’s car has the country’s flag on it but he didn’t respect it,” he added.

Further, can a judge’s protocol be termed ‘VIP’? “The SHC judge was given the protocol in light of the recent SC directives as to how much protocol an official can have,” Shahid said.

“It was justified given the fact that in past there was a suicide attack on the then judge of SHC Justice Baqar Maqbool’s protocol,” he added.

Jibran staunchly rejected the police’s version and said while speaking to Cutacut that he never tried to overtake the judge’s car.

“If only they could show the CCTV footage to the public. That will reveal that how I was harassed by the security officers, thrown into a police van and roughed up,” Jibran said.

“I am not crazy enough to overtake the judge’s car,” he said adding that he did not get a chance to make a video then because he was surrounded by the policemen. “I could only make the video for 10 seconds once I was made to sit inside the police van,” he said.

The rights activist further said that if he was truly at fault, the judge should file an FIR against him or lodge a complaint in the bar council since he is an advocate of the high court. “But he has not done that as yet,” Jibran said.

Naghma Shaikh, an activist at the Human Rights Commission of Pakistan (HRCP), called Jibran brave for taking action and confronted those who harassed him on the road.

“This happens to everyone in the city. The security officials right away show you their rifles and harass the passing-by public whenever there is a VIP movement,” she said.

Naghma said many may not support Jibran in the upcoming elections but everyone is with him against the ‘VIP culture’.